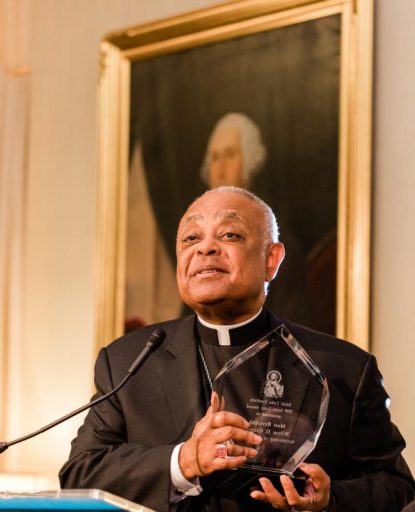 Washington Archbishop Wilton D. Gregory speaks after receiving the 2019 St. Luke Award at the apostolic nunciature in Washington Oct. 21. The St. Luke Institute honored Archbishop Gregory for reflecting the spirit of the institute’s mission in his work and leadership in the church. (CNS photo/Christine Baumgarten, courtesy St. Luke Institute)

WASHINGTON (CNS) — When Washington Archbishop Wilton D. Gregory was installed as the seventh archbishop of Washington May 21, he joined the local church in the nation’s capital in preaching a message of healing and hope.

The St. Luke Institute, a healing ministry dedicated to serving priests, deacons and religious throughout the Catholic Church, recognized Archbishop Gregory with the 2019 St. Luke Award for his leadership in the church and work that reflects the spirit of the institute’s mission.

“I have grown to know and to respect the work that St. Luke’s does for so many different people: religious, clergy, seminarians. You help the church in caring for its ministers. You do that so generously and so effectively,” the archbishop said at an awards benefit at the apostolic nunciature in Washington Oct. 21.

An anonymous $500,000 gift also was announced at the benefit, which will allow the St. Luke Institute to continue to expand the medical services provided by the Institute.

Capuchin Franciscan Father David Songy, president and CEO of the St. Luke Institute, emphasized the work of the institute, sharing a story during the benefit of a religious sister struggling with depression, whom he called “Maria.” By working with the programs and resources that the St. Luke Institute provides, Maria was able to find healing, he said.

“But the most important thing for her was that her vocation was revitalized,” Father Songy said. “Not just was she a sister again, but she had a deeper appreciation for the suffering of others … she shared this … and she was able to be even more a minister to others.”

Established in 1977, the St. Luke Institute has provided the religious community healing through an education and treatment center that ministers to the psychological and spiritual health of priests, deacons and religious. The institute provides personal care with expert-level staff and doctoral-level clinicians, with treatment spanning the physical to mental/behavioral and spiritual.

In addition to serving religious, the St. Luke Institute also has resources to help prepare seminarians for the priestly ministry.

“Equally important is that as a church we ensure that seminarians are psychologically and spiritually mature and ready to undertake their vocations,” said David Brown, chairman of the board of directors for the St. Luke Institute.

By providing assessments for seminarians, he added, the institute helps ensure the health of the church.

The St. Luke Award is given to a person whose work, either professionally or charitably, carries out the mission of the St. Luke Institute, caring for the spiritual and emotional health of religious in need.

Brown also thanked Archbishop Gregory for his continued support throughout the years of the St. Luke Institute’s work. He particularly noted that as then-Bishop Gregory of Belleville, Illinois, the prelate was president of the U.S. Conference of Catholic Bishops when the bishops in 2002 implemented the “Charter for the Protection of Children and Young People.”

Sister Ellen LaCapria, a Daughter of Charity, who sits on the board of the St. Luke Institute, said that she appreciates how this ministry can enable priests, brothers and sisters to fulfill their own vocations.

“You can’t give somebody what you do not have,” Sister Ellen said.

She said she often encounters religious who are “near burnout,” but the healing ministry of the St. Luke Institute allows them to “come away refreshed, renewed and able to serve with more fervor and deeper spirituality.”

Archbishop Christophe Pierre, apostolic nuncio to the United States, who hosted the evening, expressed his gratitude for the institute’s work.

“All of us, in some way, need to be healed,” he said, adding that Christ is the healer.

“Our mission is to heal people,” Archbishop Pierre continued. “This is also the mission of the church, to heal people because our world needs to be healed. At times we are surprised because the healers might be sick.”

NEXT: Biden denied Communion at Mass during campaign stop in South Carolina