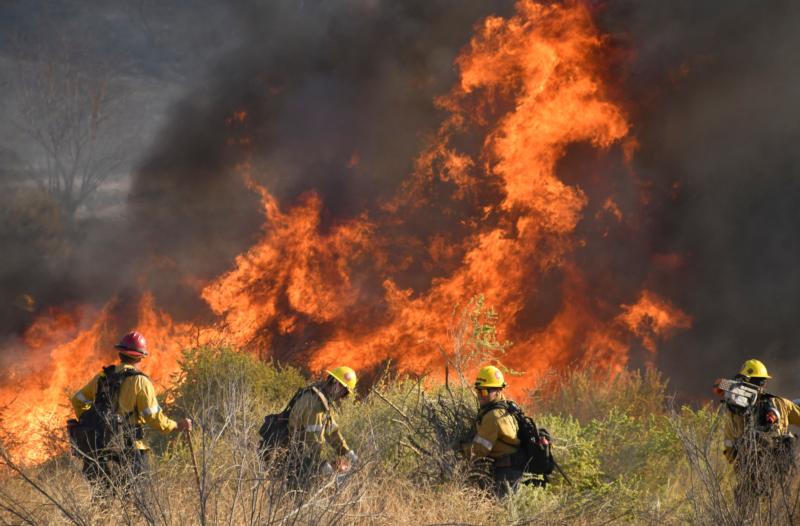 Firefighters battle a wind-driven wildfire Oct. 25, 2019, in Canyon Country near Los Angeles. The Archdiocese of Los Angeles is providing support to the communities affected by the fires through Catholic Charities of Los Angeles and local parishes and schools. (CNS photo/Gene Blevins, Reuters)

UPDATED – WASHINGTON (CNS) — The Getty Fire that began whipping through mountain communities west of Los Angeles during the early hours of Oct. 28 caused the closure of several local Catholic schools, the evacuation of students and staff at Mount St. Mary’s University and a call for the retired sisters of St. Joseph of Carondolet to shelter in place.

By Oct. 29, the fire had burned more than 600 acres and was 5% contained, according to the Los Angeles Fire Department. Several neighborhoods were under evacuation orders, and at least eight homes had been destroyed.

In Washington Oct. 30, the chairman of the U.S. bishops domestic policy committee weighed in on the tragedy of the fires and those being severely affected. In a statement, he offered his own “heartfelt prayers” and urged Catholics around the country “to support, through their petitions and concern, the efforts at extinguishment and recovery taking place throughout California in response to these fires.”

“It is in solidarity with our brother bishops in California, who have voiced their desire for prompt relief, that I encourage all appropriate public parties and the faithful to be generous in their financial support of these recovery efforts,” said Bishop Frank J. Dewane of Venice, Florida, chairman of the U.S. Conference of Catholic Bishops” Committee on Domestic Justice and Human Development.

Mount St. Mary’s campus in the Brentwood neighborhood is located near where the fire started, and its students and staff were evacuated in the early morning hours. Students who did not go to their families’ homes were brought to a nearby evacuation center or the university’s satellite campus in another part of the city.

Ann McElaney-Johnson, the university’s president, posted a letter to the campus community on Twitter Oct. 28 that said all students and staff members had all been evacuated and the campus experienced “no significant damage.”

She thanked those who helped with the evacuation and called it “moving and gratifying to see how our faculty, staff and students come together in support of each other.”

The Archdiocese of Los Angeles announced that seven elementary schools and one high school were closed Oct. 28 because of the Getty and Tick fires. As of Oct. 30, five diocesan schools remained closed.

A local NBC affiliate, KNBC, reported that more than 80 retired Sisters of St. Joseph of Carondelet and staff members had been sheltering in place.

He told the news station that the sisters, some of whom were on oxygen, were scared but in good spirits.

“We went in there and we calmed them down,” he said. “We joked with them a little bit and make sure their medical needs work. They are a great bunch of ladies.”

An Oct. 28 statement from the sisters on their website and posted on Facebook said they were safe and were remaining on site on the advice of the Los Angeles Fire Department and said that firefighters and police were with them.

“We cannot express enough our profound gratitude to the L.A. fire and police departments,” the statement said. “These first responders not only saved our property but have been with the 80 Sisters sheltering in place since before dawn this morning. Their kindness was exceeded only by their remarkable skills.”

The sisters issued an updated statement Oct. 29 saying they would remain sheltered in place, under the direction of Los Angeles Fire Department, “until the present fire event has passed.” They said they had been assured that the conditions around them “have substantially improved and for now are static.”

The sisters said they were “deeply appreciative” for the local firefighters and police officers saying that they were “extraordinary in their care, support and protection.”

“Please continue to pray with us tonight and tomorrow for winds to calm and for fires to be brought to an end,” they said, adding: “Most importantly may all the fire and police personnel be kept from harm.”