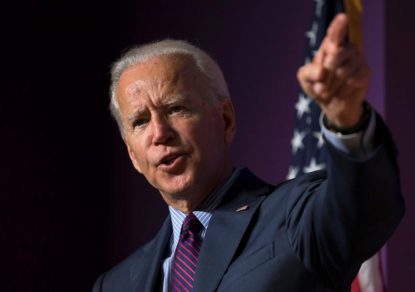 UPDATED – FLORENCE, S.C. (CNS) — Former Vice President Joe Biden attended the 9 a.m. Mass at St. Anthony Church Oct. 27 and when he presented himself to receive the Eucharist was refused by the pastor.

“Sadly, this past Sunday, I had to refuse holy Communion to former Vice President Joe Biden,” Father Robert Morey wrote in a statement responding to queries from the Florence Morning News. “Holy Communion signifies we are one with God, each other and the church. Our actions should reflect that. Any public figure who advocates for abortion places himself or herself outside of church teaching.”

At the heart of that teaching is Canon 915 of the Code of Canon Law which states that holy Communion should not be given to two groups of persons: those who are excommunicated or interdicted, and those “who obstinately persist in manifest grave sin.”

Biden, campaigning for his 2020 bid for president, was in South Carolina Oct. 26-27 attending a town hall meeting in Florence and a justice forum in Columbia. He identifies himself as Catholic and attends Mass at St. Joseph on the Brandywine in Greenville, Delaware.

After the incident was publicized, the Diocese of Wilmington, Delaware, issued a statement saying: “The church’s teachings on the protection of human life from the moment of conception is clear and well-known.”

It said Wilmington Bishop W. Francis Malooly has “consistently refrained from politicizing the Eucharist and will continue to do so. His preference, as with most bishops, is to interact with politicians individually who disagree with significant church teachings.”

Bishop Malooly in the Sept. 4, 2008, edition of The Dialog, Wilmington’s diocesan newspaper, addressed the issue of politics and Communion, specifically concerning Biden, shortly before his installation.

“I look forward to the opportunity to enter into a dialogue on a number of issues with Sen. Biden and other Catholic leaders in the Diocese of Wilmington,” the bishop said in an interview that was published four days before he was installed as bishop of Wilmington.

“However, I do not intend to get drawn into partisan politics nor do I intend to politicize the Eucharist as a way of communicating Catholic Church teachings,” he said.

The bishop said it is “critical to keep the lines of communication open if the church is going to make her teachings understood and, please God, accepted. It is my belief that Catholics of all occupations have the same duty to examine their own consciences before determining their worthiness for the reception of communion. I think I will get a lot more mileage out of a conversation trying to change the mind and heart than I would out of a public confrontation,” he added.

The bishop has not wavered from this stance, The Dialog reported Oct. 29.

The issue of Catholic politicians supporting abortion has been addressed at every level of the Catholic Church. In 2004, Cardinal Joseph Ratzinger, then prefect of the Congregation for the Doctrine of the Faith, wrote a memo on “Worthiness to Receive Holy Communion: General Principles.”

In it he stated: “Regarding the grave sin of abortion or euthanasia, when a person’s formal cooperation becomes manifest (understood, in the case of a Catholic politician, as his consistently campaigning and voting for permissive abortion and euthanasia laws), his pastor should meet with him, instructing him about the church’s teaching, informing him that he is not to present himself for holy Communion until he brings to an end the objective situation of sin, and warning him that he will otherwise be denied the Eucharist.”

“This decision, properly speaking, is not a sanction or a penalty. Nor is the minister of holy Communion passing judgment on the person’s subjective guilt, but rather is reacting to the person’s public unworthiness to receive holy Communion due to an objective situation of sin,” Cardinal Ratzinger wrote.

In his statement, Father Morey offered his prayers for Biden.

“As a priest, it is my responsibility to minister to those souls entrusted to my care, and I must do so even in the most difficult situations,” he stated.

Biden’s stance on abortion has changed over his career. He initially opposed the use of taxpayer money to fund abortions. In June, however, he reversed his position on the Hyde Amendment, which prohibits the use of Medicaid funding for abortion. In an Oct. 5 tweet, he wrote: “Roe v. Wade is the law of the land, and we must fight any and all attempts to overturn it. As president, I will codify Roe into law and ensure this choice remains between a woman and her doctor.”

Father Jay Scott Newman, pastor of St. Mary Church in Greenville, expressed support for Father Morey in an email to The Catholic Miscellany, newspaper of the Diocese of Charleston.

“As a canon lawyer, my own conviction is that Catholic politicians who support abortion do fall under the exclusion described by Canon 915 and that Father Morey arguably has the law on his side,” he said.

“Moreover, the law does not restrict to the diocesan bishop the decision to exclude from Communion someone who fits either category of Canon 915, so Father Morey did not exceed his authority.”

“Perhaps the best analogy to this matter is the decision of several bishops during the struggle for civil rights to exclude from holy Communion those Catholic politicians who continued to oppose full integration for African Americans,” Father Newman continued. “The archbishop of New Orleans, for example, was widely applauded for his courage in taking that step.”

The U.S. bishops have taken up this issue of Catholic politicians and Communion in years past. In 2003, the bishops formed a Task Force on Catholic Bishops and Catholic Politicians to examine the relationship between Catholic teachings and public policy.

In a June 2004 statement — which was heavily criticized in some U.S. Catholic quarters — the task force said there can be no hard-and-fast national rule forbidding Catholic politicians from receiving Communion if they adopt public policy stands that are in opposition to church teaching on fundamental moral issues such as abortion or euthanasia or same-sex marriage.

It said it was up to each bishop to seek to educate and persuade Catholic politicians on church teachings in such areas and to make case-by-case pastoral decisions whether certain members of their diocese should be told not to present themselves for Communion.

Mays is editor of The Catholic Miscellany, newspaper of the Diocese of Charleston. The Dialog contributed to this report.