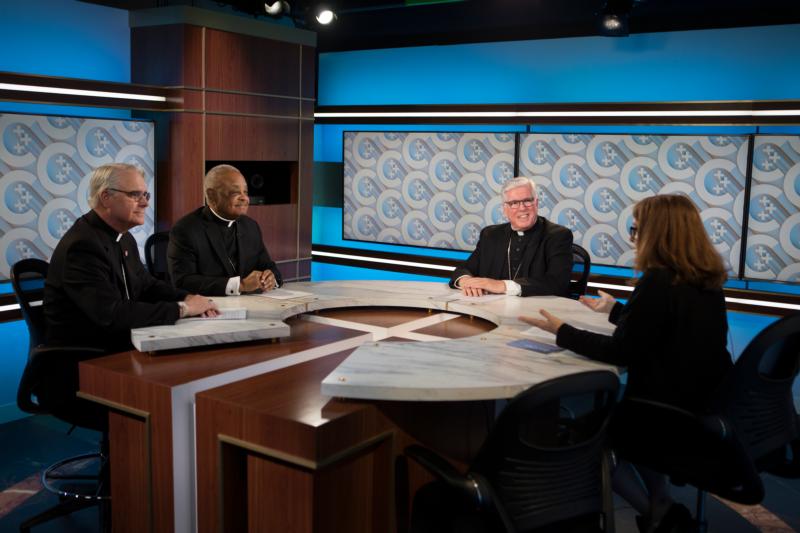 WASHINGTON (CNS) — The Catholic Church’s opposition to the death penalty stems from its view on the sacredness of human life and the value of mercy, said U.S. bishops in a roundtable discussion about capital punishment Oct. 10.

The discussion, which was livestreamed by Catholic News Service, took place on the World Day Against the Death Penalty and highlighted not only the consistency of church teaching against capital punishment but also what Catholics could do to learn more about what the Catholic Church has to say on this issue.

The panelists were Archbishops Paul S. Coakley of Oklahoma City and Wilton D. Gregory of Washington and Bishop Frank J. Dewane of Venice, Florida. Bishop Dewane is chairman of the U.S. Conference of Catholic Bishops’ Committee on Domestic Justice and Human Development and Archbishop Coakley is its chairman-elect.

“The death penalty is wrong, I believe, in many different ways,” but particularly because it is “coarsening society,” said Archbishop Coakley, who stressed that capital punishment is “not a way forward” and instead is compounding the violence already present in this country.

When the bishops were asked how opposition to the death penalty can be seen as a pro-life issue, Archbishop Gregory said: “It makes us violent to do violence against another human being” whether that person is waiting to be born, has reached the end of life or has committed a serious crime. They all “belong to God’s creation,” he said.

“Our positions are very consistent in affirming human life and human dignity at every stage of life,” added Archbishop Coakley.

Bishop Dewane similarly echoed the point about the sacredness of human life and said that “when it is violated, when it is attacked,” we are called to step in and “become the voice for those who can’t speak” for their own lives.

The bishops also spoke about problems with the death penalty. Archbishop Gregory mentioned cases where plaintiffs of color were not given a jury of their peers and also when DNA results have exonerated death-row prisoners. Bishop Dewane mentioned that many on death row include people of color or those in poverty or suffering from mental illness and said society needs to look at these factors and consider not just punitive but redemptive measures.

Archbishop Coakley said his state of Oklahoma still has the death penalty and he thinks this is in part because of the Oklahoma City bombing of 1995 when one bomb in just seconds killed 168 people.

Ultimately, the archbishop said, the only thing to bring these victims’ families healing or comfort is “mercy: being willing to forgive.”

Archbishop Gregory echoed this thought, saying that compassion often follows a tragedy, such as the Oklahoma City bombing or the shooting at Mother Emanuel, the church in Charleston, South Carolina, where nine people were killed by Dylann Roof in 2015.

Roof is currently one of 62 inmates on federal death row. This summer the federal government rescinded its 16-year moratorium on executing federal inmates.

Archbishop Gregory said the victims’ families often “offer a wonderful witness of mercy when from the depths of their hurt, the depths of their sorrow they find it in their heart to forgive.” That act of forgiveness, he said, is the “antidote to the violence that seems to surround us.”

When the bishops were asked about Catholic opinion of the death penalty — 53% are in favor of it, according to a 2018 Pew Research Center poll — Archbishop Coakley said: “It’s really important for our Catholic people to really dig into and learn, study, read the teachings of the magisterium of the church” on this issue.

He said with the popes — St. John Paul II and Popes Benedict and Francis — there has been “a steady movement toward a greater clarity in terms of the morality and the inadmissibility of the death penalty.”

Archbishop Gregory similarly stressed that Catholics need to understand what is at stake for the nation as a whole with its continuing use of capital punishment.

“We need to find a way to make sure that our people understand that the Gospel calls us to mercy and that is a nonnegotiable dimension of our faith,” he said. He also acknowledged that this isn’t an easy message to follow.

“Mercy is never cheap,” he said. “Mercy has a price, but the price of not being merciful is more destructive than most people will understand.”

NEXT: Panel: At ballot box, let Gospel, not a political party, guide your vote