Laguna people are an example of perseverance in faith, archbishop says 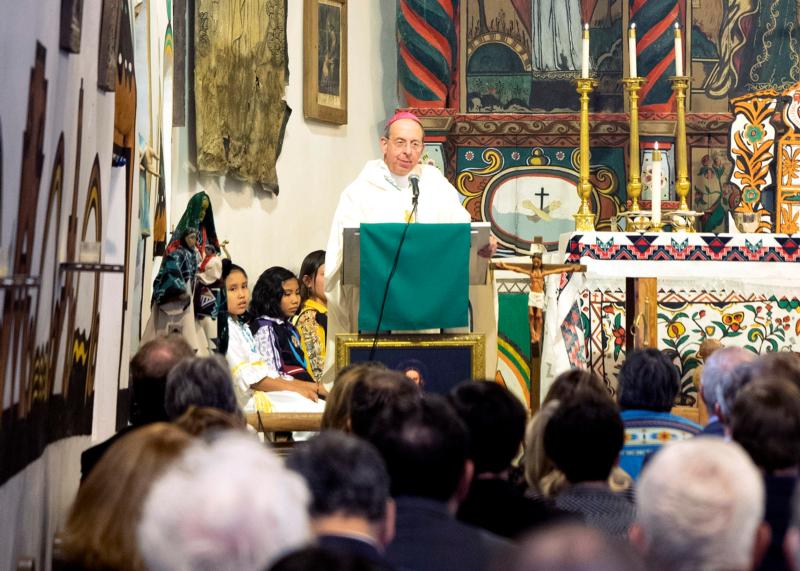 BALTIMORE (CNS) — The native peoples of the Laguna community in New Mexico are a “living example” of perseverance in faith, Baltimore Archbishop William E. Lori said Oct. 12 during a Mass at a historic 320-year-old mission church that is part of the Laguna Pueblo.

Archbishop Lori, supreme chaplain of the Knights of Columbus, was in New Mexico for the annual meeting of the fraternal organization’s board of directors Oct. 11-13.

Archbishop Lori highlighted the “beautiful expressions of faith of the Laguna tribe” in his homily at St. Joseph Church on the Laguna Pueblo, which is home to six villages of Native American peoples.

In the liturgy, he said, “we witness a beautiful intertwining of history and culture transformed by faith, expressions of gratitude to God that are profoundly at one with creation.”

Referencing the Pueblo Rebellion of 1680, an uprising against Spanish colonists led by Po’pay that resulted in 12 years of independence for Pueblo people, Archbishop Lori said the Laguna community suffered from a lack of priests in the years following the uprising — an absence it endured numerous times over its long history, he said.

“Nonetheless, your community continued to revere the Mass, train your young people to serve Mass and keep your churches intact,” Archbishop Lori said in his homily. “What’s more, you did all of this in the face of persecution and, in the process, many of your number became martyrs for the faith.”

Archbishop Lori noted spiritual writers warn that all are tempted to small betrayals, to small compromises of their faith, and to the lure of sin and its “false promises.”

“It is in these small matters that our endurance as Christians is tested,” he said, “but bigger tests are in the offing, and, in a sense, are already here.”

Today, Archbishop Lori said, in a society that is increasingly hostile to Christianity, believers should expect to pay a high price for their faith, “though not nearly so high as the price which Jesus paid to ransom us.”

“We must ask the Holy Spirit to renew in us the gift of courage,” he said, “so that we will hold out to the end, just as saints did before us.”

The Knights of Columbus, in partnership with the Diocese of Gallup, New Mexico, and the Southwest Indian Foundation, is helping to build a new shrine dedicated to St. Kateri Tekakwitha, a Native American saint known as the “Lily of the Mohawks.”

Gallup Bishop James S. Wall broke ground on the shrine Aug. 11 at an event that included the Butterfly and Eagle dances by members of the Laguna tribe.

During the Synod of Bishops for the Amazon, which began Oct. 7 in Rome, Pope Francis emphasized the importance of respect owed to indigenous cultures. Those participating in the synod have called for studies to be made of cultural expressions of the faith in liturgy with the goal of developing an “Amazonian rite” for the celebration of Mass in South America.

According to official summaries of synod proceedings reported by Catholic News Service, synod participants advocated for renewed forms of evangelization and missionary work in ways that respect indigenous culture but share with the people the good news of salvation in Christ.