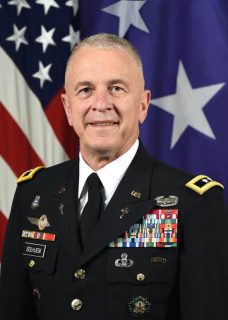 The Rev. Thomas Solhjem, who is U.S. Army Chief of Chaplains, is seen in this June 3, 2019, official Pentagon photo. Pastor Soljhem is an Assemblies of God minister who holds the rank of major general. (CNS photo/Monica King, courtesy U.S. Army)

WASHINGTON (CNS) — The Army, like the rest of the military, is not immune from the destabilizing and sometimes crippling psychological traumas that affect civilians.

Now, though, Army chaplains are viewed as a first line of defense to identify behavioral problems and direct soldiers and their families to how they can best get help.

“It’s very humbling to come to a chaplain and say, ‘Hey, I’m broke and need help,'” said Marist Father Joseph Fleury, command chaplain at Fort Belvoir, Virginia, and the Military District of Washington, who holds the rank of colonel, noting that “so much changed” in the wake of the 9/11 terror attacks in 2001.

“In every organization, in every unit of the Army, starting at the lowest unit, which is the battalion,” said Father Fleury’s boss, the Rev. Thomas Solhjem, Army chief of chaplains, “chaplains are assigned units,” although behavioral health specialists are not always similarly assigned.

“About 62%, give or take-ish, of referrals to the behavioral health community come from chaplains,” said Pastor Solhjem, an Assemblies of God minister who holds the rank of major general.

The two chaplains spoke Oct. 16 to Catholic News Service in Washington during the annual convention of the Association of the U.S. Army.

As chaplains, “we have confidential and privileged communication” with Army personnel and their families, Pastor Solhjem said. “If you think of it from the Catholic context, it’s the confessional. The information belongs to the one to whom I’m speaking.”

Pastor Solhjem spoke of one initiative at one outpost that the Army ultimately embraced for everyone under its command.

“In Hawaii at the time,” he recalled, an artillery division’s members “were experiencing all kinds of training issues: suicide, substance abuse, domestic violence, all the sharp issues and activities. The commander is like, to the chaplain, ‘Help.'”

This role of the chaplain is more nuanced than, say, that of Father Mulcahy in the old “M*A*S*H” television sitcom. “When a solider looks at our uniform, those religious symbols — whatever they might be — they say we value you. We treat people with dignity and respect,” Pastor Solhjem said.

The chaplain assigned to that unit — who is now on Pastor Solhjem’s staff — “cobbled together the professional help to help him address this problem,” he said, among them including specialists in behavioral health and community services.

Army headquarters saw the results, tweaked the initiative a bit and rolled it out to the entire Army under the name Strong Bonds. “The Army has always led in the human dimension, of the soul-care,” Pastor Solhjem said.

“For various soldiers, there’s a crisis of faith: ‘Where is God in my pain, in my brokenness?’ That’s our bread and butter, what we bring to the table,” Father Fleury said. “A wise chaplain knows when to refer the soldier to the appropriate person.”

But “part of our spiritual mission is to connect God, the divine presence, to the solider. We say it’s to bring God to the soldier bring and the soldier to God,” he added.

“At its deepest level, I think a lot of the struggles, a lot of the issues, have had some spiritual base,” Father Fleury said. While not every soldier improves after being given a behavior health referral, he said he believes chaplains are carrying out their own mission “if we can lighten the load for the soldier or make the soldier aware of the presence of the divine.”

He added, “We are moving in a positive direction … in terms of beneficial results. It shows in the unit, and most importantly, within the soldier himself and herself, and they are able to find their mission in the United States Army.” But Pastor Solhjem said that, given the Army’s three priorities of readiness, modernization and reform, “Strong Bonds is the example of a program that may need modernizing and reform.”

But he also noted, that given the Army chaplaincy dates back 244 years, “we get it” as chaplains.

“The nation expects us to take care of them (soldiers) in all of life and in death. They expect us to be there for them, and chaplains do that: nurture the living, care of the wounded, and honor the fallen,” Pastor Solhjem said. “If I seem a little passionate today, I will not apologize. I love what I do. I love being a soldier in the United States Army, and I love being a chaplain.”

PREVIOUS: With political will, countries can meet needs of refugees, speakers say

NEXT: Laguna people are an example of perseverance in faith, archbishop says