Priests carry ideals of military chaplaincy service into their parishes 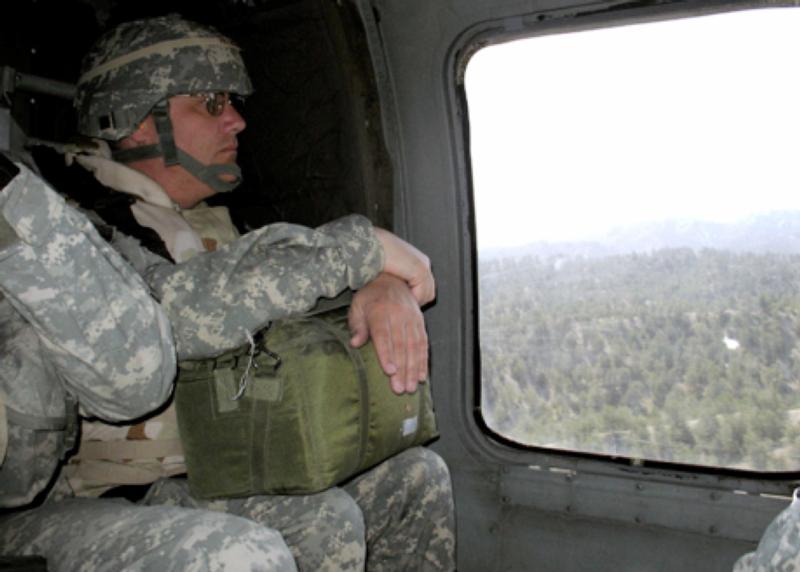 In this undated photo, Father Gary Linsky travels in a helicopter to go celebrate Mass for men and women serving in the U.S. Air Force. The priest, who is rector of the Basilica of St. Peter in Columbia, S.C., served as a chaplain with the Air Force Reserves and on active duty. (CNS photo/Father Gary Linsky, courtesy The Catholic Miscellany)

CHARLESTON, S.C. (CNS) — Dressed in camouflage fatigues and combat boots, chaplains in the military look a lot like the men they serve. Instead of weapons, however, these clergy carry the sacraments as they minister on and off the battlefield.

The Diocese of Charleston has several priests who first served as military chaplains, and they say the ideals of serving God and country transition well to leading a parish.

Father Robert Spencer, pastor of Christ Our King Church in Mount Pleasant, served in the U.S. Navy for 28 years, including 15 years as a chaplain both stateside and overseas. He said it is an experience that would benefit most vocations, inside and outside the Catholic Church.

“You have to have the discipline to do what needs to be done,” he said, while also recognizing when to adjust course.

“Sometimes life is very fluid,” Father Spencer told The Catholic Miscellany, Charleston’s diocesan newspaper. He first learned that lesson in the Navy, and appreciates it now as pastor of an active parish with a large number of service men and women.

Father Gary Linsky, rector at the Basilica of St. Peter in Columbia, serves a parish surrounded by military installations, including Fort Jackson Army Base in Columbia, Shaw Air Force Base near Sumter and the Army/Air National Guard installation near Eastover.

He said he first found his calling while serving as a hospital administrator for the U.S. Air Force. From there, he entered seminary and was ordained to the priesthood for the Diocese of Charleston in 1995. He became a chaplain with the Air Force Reserves and returned to active duty in 1999.

Father Linsky completed seven deployments to the Middle East, including tours in Iraq and Afghanistan, where he ministered to small groups of Catholics at bases along the Afghan-Pakistan border.

He said those deployments presented him with the greatest rewards and personal challenges. Part of it was finding ways to make the Catholic faith relevant to young people far from home, in life or death situations.

In 2007, Chaplains Under Fire, an internet blog devoted to the service of military chaplains, was following Father Linsky in southeastern Afghanistan. It was Easter Week and he was intent on celebrating Mass at all 15 forward operating bases.

One night, when Father Linsky returned to his home base, he and others were greeted by an enemy rocket attack, with a half dozen missiles landing near the base throughout the night, the blog stated.

The next morning, Father Linsky slipped on his body armor, grabbed his chaplain’s kit and climbed into a helicopter headed to three more bases.

“It is Easter, and these kids deserve a Mass,” he told the blog.

Father Spencer, who served his final year on active duty as a military chaplain at Arlington National Cemetery, said he would have served longer but, as a Navy commander, he was required to retire when he did.

“I am happy and privileged to serve as long as I did,” Father Spencer said.

Fathers Spencer and Linsky agree military chaplaincy is an important vocation for the church.

“The world is still very volatile and if I were to be in harm’s way, I would want a priest to be available to offer me the sacraments,” Father Spencer said. “I was able to anoint several Marines moments before they passed away in a field hospital. That was extremely humbling for me and it justified my calling as a military priest.”

Unfortunately, the number of chaplains serving armed forces is declining.

The U.S. Archdiocese for the Military Services notes that the number of priests on active duty has dropped below 200. That number should be closer to 700 to serve the pastoral needs of service members and their families, according to Archbishop Timothy P. Broglio, who heads the archdiocese.

In South Carolina, the archdiocese lists 13 priests and deacons serving the U.S. military and the Department of Veterans Affairs. Of those, 10 are military chaplains, said Taylor Henry, director of public affairs and media relations for the military archdiocese.

The decline is attributed primarily to aging chaplains who are reaching military retirement faster than they can be replaced.

To help address the shortage, in 2015 the archdiocese began holding annual retreats to help priests discern if they are called to serve as military chaplains. The gatherings, called “For God and Country: A Call to Serve Those Who Serve,” have resulted in at least 11 priests serving the military archdiocese as chaplains.

Father Linsky feels military service and the chaplaincy is an important vocation for the church and his experience is serving help well as a parish pastor.

“In this challenging era, when so many feel we lack authenticity and meaning, military service kept me focused on representing the Catholic Church and spreading the faith in often difficult and challenging terrain — which has proven very helpful in parish ministry,” he said.

Cregar writes for The Catholic Miscellany, newspaper of the Diocese of Charleston.