The more Cavins teaches about Bible, the more he learns ‘how to teach it’ 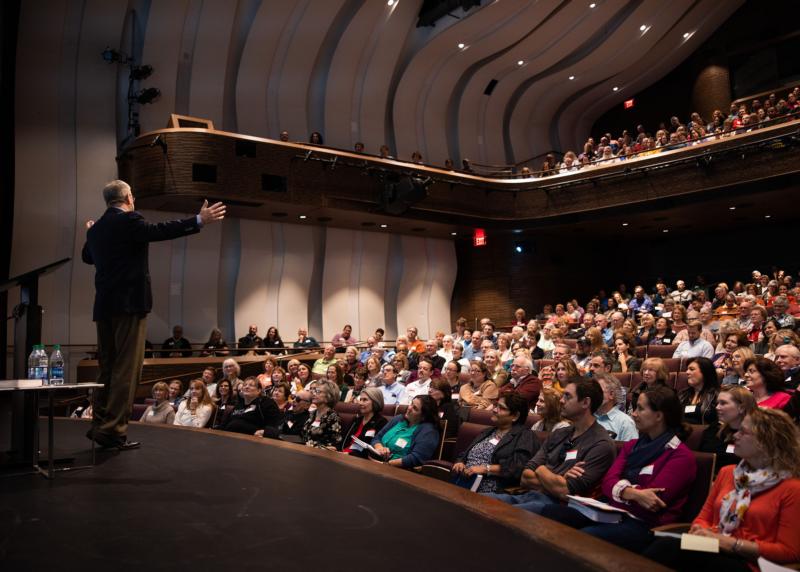 Evangelist Jeff Cavins, a biblical scholar and EWTN host, speaks Oct. 19, 2019, at the Museum of the Bible in Washington. (CNS photo/courtesy Ascension Press)

WASHINGTON (CNS) — Jeff Cavins realized how long he’d been an author, Bible teacher and broadcaster when a priest approached him to say, “When I was young, my mother made me watch you.”

Did that make him feel like Bishop Fulton Sheen?

An Oct. 19 presentation at the Museum of the Bible was sold out. Cavins is a member of the museum’s Catholic advisory panel. He also gave a second full day of talks Oct. 20 at the museum.

Having been raised Catholic, then becoming an evangelical Protestant minister, Cavins in 1995 returned to Catholicism, a journey he wrote about in his 2000 book, “My Life on the Rock,” which also was the name of the program he hosted on the Eternal Word Television Network from 1996 to 2002.

“I was convinced that the church I was pastoring didn’t look anything like the early church,” Cavins told Catholic News Service in an interview.

Fortunately, he said, there to help him was his childhood priest — who became a bishop, the late Bishop Paul V. Dudley — as well as now-Archbishop Robert J. Carlson of St. Louis, who was an auxiliary bishop of St. Paul and Minneapolis, 1984-1994. Bishop Dudley headed the Diocese of Sioux Falls, South Dakota, 1978-1995; he died in 2006.

Cavins, 61, calls himself a “paper convert,” meaning, “someone who studies their way into the Catholic Church. He’d been studying the papacy, the early church fathers and the writings of St. John Paul II.

“It so resonated in my heart that I (was) not in the family anymore,” he recalled. “Also, the open-arms policy of my childhood pastor. It was very peaceful.”

The joy in teaching, he said, is that “I really enjoy seeing the lights go on in our students when they get the big picture and they finally understand it. The more I teach it, the more I learn how to teach it.”

And he still learns new things himself through the process. “It happens four or five times a year — a breakthrough thing, something big.”

The last time that occurred? “It was the relationship between the grave — the number one fear of dying — and that the steps to the grave are made up of dying daily. As a Christian, you die daily,” he explained.

“What’s going to impress them,” he said of his audience, “is they can get their hearts and minds around salvation history. In one day, they’re probably going to be equipped to read the Bible probably better than 90 percent of the Christians out there.”

The historical chart, organized in 12 colors, gives his audiences “a glimpse into the heart of our heavenly Father and his plan, and that gives them a foundation they can trust.”

The taxonomy may be familiar to anyone who took survey courses of the Old and New Testaments in college, but Cavins’ skill resides in his patient explanations, without skimping on the secular histories of the lands in which Bible stories are set.

And also, he likes to quip, “You hit Leviticus.” Books of ancient rules obstruct any sense of narrative history. That’s why he identifies the 14 narrative books while placing the remaining 59 into a historical context.

Cavins finds that teaching can be most effective with epigrammatic language.

The Bible “is not a book,” he reminded his audience. “It’s a library. If we try to get our minds into this without a story, then that’s like toast without butter. It’s dry.”

The Catechism of the Catholic Church, he says, “is a marvelous tool, but it’s a honking book. The catechism takes everything Catholic and puts it into perspective.” The Nicene Creed takes the Bible narrative “and squishes it.”

Sacrament and liturgy are “how you get into the story. God comes looking for you. You are living a script, and it’s the life of Christ.”

Sin he describes as “an attempt to be happy. If this is what we grasp for instead of God, then there is trouble.”