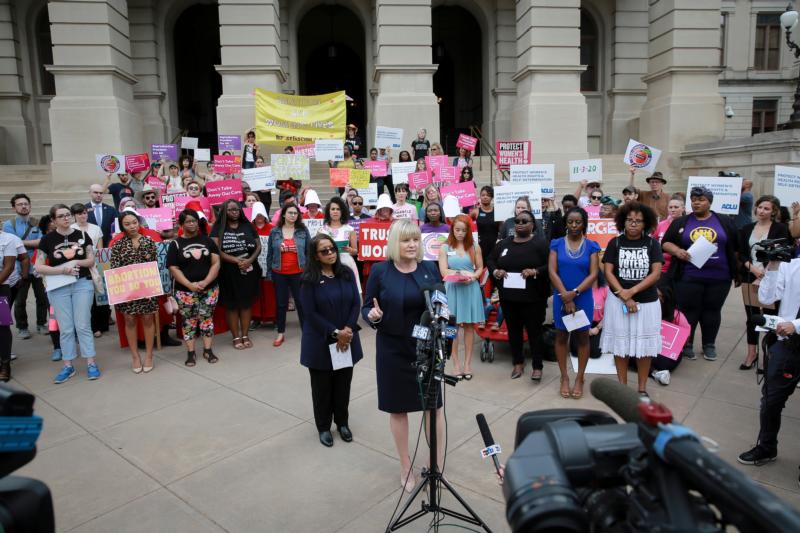 Staci Fox, chief executive and president of Planned Parenthood Southeast, speaks in protest of Georgia’s “heartbeat” bill at the state Capitol in Atlanta May 7, 2019. Signed into law that day by Gov. Brian Kemp, the measure was to take effect Jan. 1, 2020, but was temporarily blocked by a U.S. District Court Oct. 1. It would ban abortion once a fetal heartbeat is detected, which could be as early as six weeks into a pregnancy. (CNS photo/Elijah Nouvelage, Reuters)

ATLANTA (CNS) — A U.S. District Court judge Oct. 1 temporarily blocked a Georgia law that would ban abortions once a fetal heartbeat is detected, which is around six weeks.

Known as the “heartbeat bill,” it was signed into law May 7 by Georgia Republican Gov. Brian Kemp and was to have taken effect Jan. 1. The ruling by Judge Steve C. Jones will put it on hold while a lawsuit against it is argued in court.

In reaction to Jones’ ruling, a spokeswoman for Kemp was quoted by USA Today as saying, “Despite today’s outcome, we remain confident in our position. We will continue to fight for the unborn and work to ensure that all Georgians have the opportunity to live, grow and prosper.”

When it was passed, Republican Rep. Ed Setzler, the bill’s author, said the legislation was one of “common sense” to “balance the difficult circumstances women find themselves in with the basic right to life of a child.”

In response, Democratic Sen. Jen Jordan said: “There’s nothing balanced about it: It’s an all-out abortion ban” and added that she was worried the new law would push obstetricians away from practicing in Georgia.

Current state law allows abortions up to the 20th week of pregnancy.

Kemp’s signing of the “heartbeat” bill came after weeks of protests and amid outcry for legal action against it.

“We will not back down. We will always continue to fight for life,” the governor said at the time about expected legal challenges to the new law.

The Georgia legislation also prompted a response from Hollywood long before it was signed into law.

A group of 50 celebrities, led by activist actress Alyssa Milano, signed a letter in late March declaring a boycott of the state’s film industry if the bill passed.

Ashley Bratcher, lead actress in the pro-life movie “Unplanned” and native Georgian, responded in an open letter to Milano saying: “In Georgia, we care just as much about being pro-life as being pro-film. We don’t believe in putting a price tag on human life.”

NEXT: Forgiveness for brother’s killer was act of Christian love, Dallas bishop says