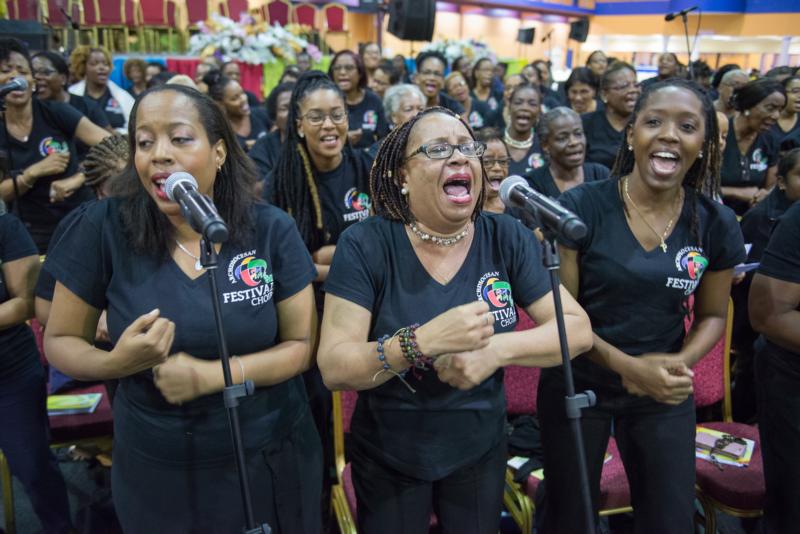 Members of the National Choir sing before before the closing Mass of the Antilles Episcopal Conference in Port-of-Spain, Trinidad, Sept. 22, 2019. The Sept. 19-22 conference was in anticipation of the Extraordinary Missionary Month in October. (CNS photo/Elmo Griffith, Catholic Media Services/Catholic News, Trinidad)

PORT-OF-SPAIN, Trinidad (CNS) — A move toward local missionaries after the Second Vatican Council has transformed into consecrated laypeople serving territories within the Caribbean region.

The change did not happen without bumps in the road.

“It was easy to accept and open up to us,” said Jennifer Jennings, a member of the Living Water Community, “because we spoke and looked more like them. But, it was not so much race as it was missionaries who were laypeople in jeans, T-shirts, crosses ’round necks.”

Living Water Community was among the first of the new ecclesial movements in the Anglophone Caribbean to begin sending consecrated laypeople from their Trinidad base to other territories. The 600-member community currently operates resident missions in Barbados, St. Lucia and Dominica. The community began in Dominica just after Hurricane Maria struck in 2017, when Living Water sent relief and rebuilding teams.

The Antilles region has been mission territory for more than 500 years but, until the late 1960s, missionaries came from outside the Caribbean.

After the Second Vatican Council, “there was a drive toward ‘local,'” said Bishop Gabriel Malzaire of Roseau, Dominica.

“Having grown in a very foreign church with foreign leadership, people’s image of God was foreign. Therefore, any kind of movement that happened within the church, happened with great effort,” he said.

The former lecturer in mission studies at the Regional Seminary of St. John Vianney and the Uganda Martyrs in Trinidad and Tobago cited the struggles within his own island of origin, St. Lucia, when churches commissioned island-inspired murals on their interior and exterior walls during the 1970s and ’80s.

“We started painting murals in St. Lucia by Dunstan St. Omer (that featured) black figures — a black Jesus and black Virgin Mary. It took some time to accept those things. Eventually, people came round to seeing value in themselves,” the bishop said.

“With the Black Power Movement (in the 1970s), there surfaced a greater awareness in the people of their identity,” he added.

The “evolution of black clergy,” too, fueled that consciousness.

“I was ordained in 1985, and my year group was the biggest year group to be ordained,” Bishop Malzaire recalled. “The thirst for localness began to grow.”

Father Mikkel Trestrail, co-founder of the Companions of the Transfigured Christ, said his lay ecclesial community was also embraced on the Dutch island of Curacao. Initially the Companions was an all-male community that included three lay consecrated brothers. Now, the 22-member network in Trinidad and Curacao includes five women and one priest; Father Trestrail was ordained in September.

The priest said people in Curacao were intrigued by consecrated laypeople. “It was new, they were not accustomed to lay consecrated life.”

Because of their small numbers, establishing a resident community is not yet possible, but Companions does “psycho-social work with groups and individuals,” said Father Trestrail. In Curacao, outreach to couples and families is aided by Curacaon members, technology and Trinidad members’ regular visits to the territory.

Jennings admitted “It took a while for (people) to understand our life … that we couldn’t date.”

But it’s also important for the missionary to understand the environment in which they serve, she said.

Nineteen territories comprise the Antilles Episcopal Conference’s pastoral area, with an average population of just over 44 million, each with very different cultures and ethnicities.

“Each island has their own culture; the church has its own dynamic,” said Jennings. Reared in both Jamaica and Trinidad, she added, “You can’t go with any preconceived ideas of taking our culture. You have to be able to go into a territory, be ready to go into a culture and participate.”

Citing Living Water’s ministry in Dominica, which ranges from conducting eucharistic services to working in a soup kitchen, he said: “When we approach ministry in that manner, we cannot lose. It says something about the formation of the laity, which is a right the laity has. And educates the laity on the faith, which is a right.”

Bishop Malzaire noted that “co-responsibility” is “one of the ideas that is being pressed” by Pope Francis.

Therefore, it is important for the church to prepare its clergy to cooperate with laity.

Deborah de Rosia, director of the Pontifical Mission Societies in the Archdiocese of Port of Spain, said the universal focus on mission is timely. In a July interview with a local news network, she said it was time to wake “the sleeping giant.”

“Many of our Catholics have become dwarves,” said de Rosia, who also heads the Eternal Light Community, a new ecclesial movement that operates a mission in the fishing village of Delaford, about 45 minutes northeast of Scarborough, along Tobago’s east coast.

“It is time for our Catholics to grow up and become the giants that come alive in the church. We have to get into the trenches, we have to make Christ known; there is no other way.”

NEXT: The Christian battle is against evil, not people, pope says