The Christian battle is against evil, not people, pope says 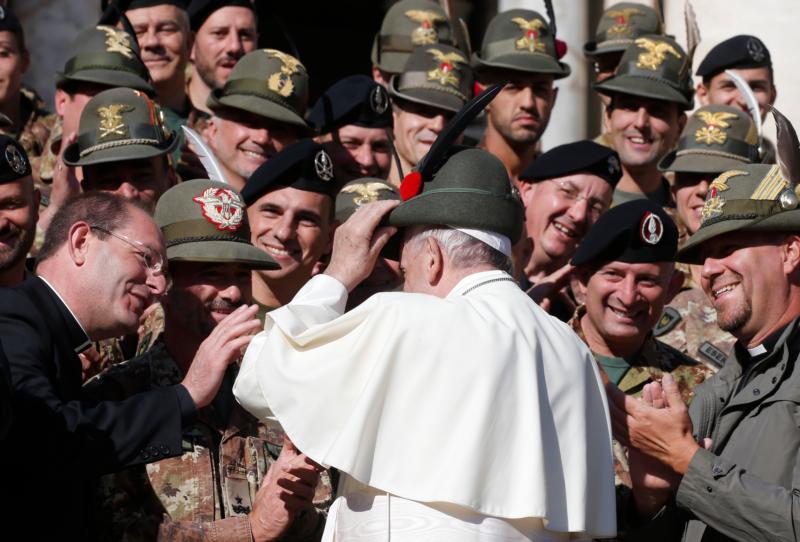 Pope Francis tries on a hat presented by Italian soldiers during his general audience in St. Peter’s Square at the Vatican Oct. 9, 2019.(CNS photo/Paul Haring)

VATICAN CITY (CNS) — When Catholics attack other members of the church, they are hurting Christ, Pope Francis said.

“Even those who are ideologists, because they want the ‘purity’ of the church, strike at Christ,” he said during his weekly general audience in St. Peter’s Square Oct. 9.

Taking a break from the Synod of Bishops for the Amazon, the pope led the audience and continued his series of talks on the Acts of the Apostles.

He focused on the persecution of the church after St. Stephen’s martyrdom, and on St. Paul’s transformation from being known as Saul and a persecutor to being Paul, a disciple of Christ and courageous preacher of the Gospel.

Saul wanted to destroy the church and he would hunt down Christians to be imprisoned.

Pope Francis said those people at the audience who have experienced or whose communities have experienced “persecution by dictators understand well what it means to ‘hunt people down,’ and that is what Saul did.”

Saul thought he was serving God’s law, the pope said, and he saw Christianity as a doctrinal divergence from Judaism.

But inside of Saul, with his “murderous threats,” there “blew a breeze that smelled of death, not life,” the pope said.

Saul is depicted as someone who shows great intolerance toward those who think differently from him and who reduces them to potential enemies to crush, he said.

Saul, he said, turns religion into “a religious ideology, a social ideology and a political ideology.”

It is only with his conversion on the road to Damascus, when Christ touches his heart, that Saul, blinded and helpless, becomes Paul and is reborn through baptism.

“Only after he has been transformed by Christ will he teach that the true struggle ‘is not with flesh and blood,’ but against the powers of darkness, against the evil spirits,” Pope Francis said.

Paul, he said, teaches “that you mustn’t fight people, but fight the evil that inspires their actions.”

Saul’s angry and confrontational approach, the pope said, “invites all of us to ask ourselves: How do I live my life of faith? Do I go to encounter others or am I against others? Does everyone — the good and the bad — belong to the universal church or is it a selective ideology?

“Do I worship God or do I worship dogmatic formulations? Does the faith in God I profess make me friendly or hostile toward those who are different from me?” he asked.

When the risen Christ calls to him on the road to Damascus and asks, “Saul, Saul, why are you persecuting me?” the pope said, he is showing how hurting one member of the church is hurting Christ himself, because all those who believe in him are one body in Christ.

With baptism, Paul’s life and his way of seeing God, himself and others are transformed, the pope said. Now other people are no longer enemies, but are “brothers and sisters in Christ.”

The pope asked people pray to experience, like Paul, the full impact of God’s love, “which alone can turn our stony hearts into hearts of flesh,” capable of welcoming others in the same way as Jesus himself.

NEXT: Cardinal Sarah: To oppose the pope is to be outside the church