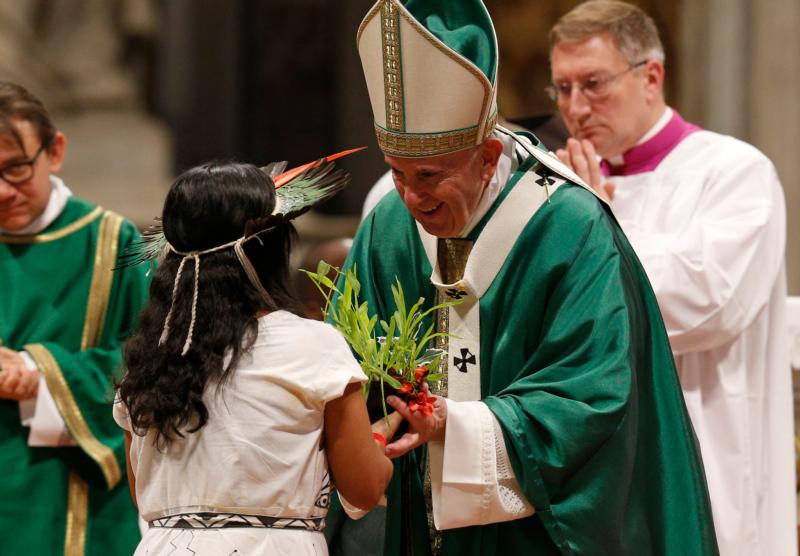 Pope Francis accepts a plant during the offertory as he celebrates the concluding Mass of the Synod of Bishops for the Amazon at the Vatican Oct. 27, 2019. (CNS photo/Paul Haring)

VATICAN CITY (CNS) — Poor people from the Amazon have shown that God’s creation must be treated “not as a resource to be exploited but as a home to be preserved, with trust in God,” Pope Francis said.

He celebrated Mass Oct. 27 to mark the end of the Synod of Bishops for the Amazon, which brought together bishops, priests and religious, and lay men and women, including indigenous people, from the nine Amazonian countries.

Synod participants, some wearing their native dress and feathered headdresses, led the procession into St. Peter’s Basilica. During the offertory, an indigenous woman presented the pope with a plant.

Their presence was a reminder of the pope’s rebuke to a bishop who had made a derogatory comment about an indigenous man wearing his headdress at the synod’s opening Mass on Oct. 6.

Instead of using a crosier made of precious metals, the pope carried a carved wooden crosier that the Vatican said was a gift from the synod. During the assembly, participants described the environmental devastation and social problems caused by mining in the Amazon.

Pope Francis’ homily about the Gospel parable of the self-righteous Pharisee and the tax collector drew parallels to the situation in the Amazon. It also appeared to address critics who have called the synod heretical.

The Pharisee was “the most pious and devout figure of the time, and the tax collector, the public sinner par excellence,” Pope Francis said. But in Jesus’ eyes, “the one who is good but presumptuous fails; the one who is a disaster but humble is exalted by God.”

The Pharisee “stands in the temple of God, but he practices another religion, the religion of ‘I,’ and many popular groups, Christian and Catholic, follow this path,” Pope Francis said. “The drama of this man is that he is without love.”

In contrast, the tax collector’s prayer for mercy “is born from the heart,” the pope said. “To pray is to stand before God’s eyes, without illusions, excuses or justifications.”

The Pharisee’s attitude is apparent in “those who are prominent” considering others to be “backward and of little worth, despise their traditions, erase their history, occupy their lands, and usurp their goods,” he added.

The pope’s words echoed the accounts of indigenous observers at the synod, who described a history of plundering of timber, rubber, minerals and other natural resources in the Amazon. That rapaciousness has displaced people from their land and spurred violence, including human trafficking and the murder of people who try to defend their territories.

“In this synod we have had the grace of listening to the voices of the poor and reflecting on the precariousness of their lives,” Pope Francis said.

The “scarred face of the Amazon region,” he said, shows that past experience has not been enough “to stop the plundering of other persons and the inflicting of wounds on our brothers and sisters and on our sister earth.”

The pope’s language throughout the synod has echoed the words of his namesake, St. Francis, who praised God through his brothers, wind and air, and his sister, Mother Earth.

Nevertheless, the gathering was sharply criticized by some Catholic groups that claimed it was heretical. The critics, who were active on social media during the synod, also claimed that a carved image of a pregnant indigenous woman that was used during some prayer services was a pagan idol.

Pope Francis urged his listeners to reflect on “whether we, too, may think that someone is inferior and can be tossed aside, even if only in our words.”

“Self-worship carries on hypocritically with its rites and ‘prayers,'” the pope said, adding that many people who fall into self-worship “profess to be Catholics, but have forgotten to be Christians and human beings, forgetting the true worship of God, which is always expressed in love of one’s neighbor.”

Calling the poor “the gatekeepers of heaven,” he said, “they were not considered bosses in this life. They did not put themselves ahead of others. They had their wealth in God alone. These persons are living icons of Christian prophecy.”

The pope paused during his homily to acknowledge the presence of “the poorest people of our most developed societies, the sick from the L’Arche Community,” who were seated in the front rows in the basilica.

“Let us pray for the grace to be able to listen to the cry of the poor,” Pope Francis said. “This is the cry of hope of the church.”