Synod calls for more church roles for women, but stops short of diaconate 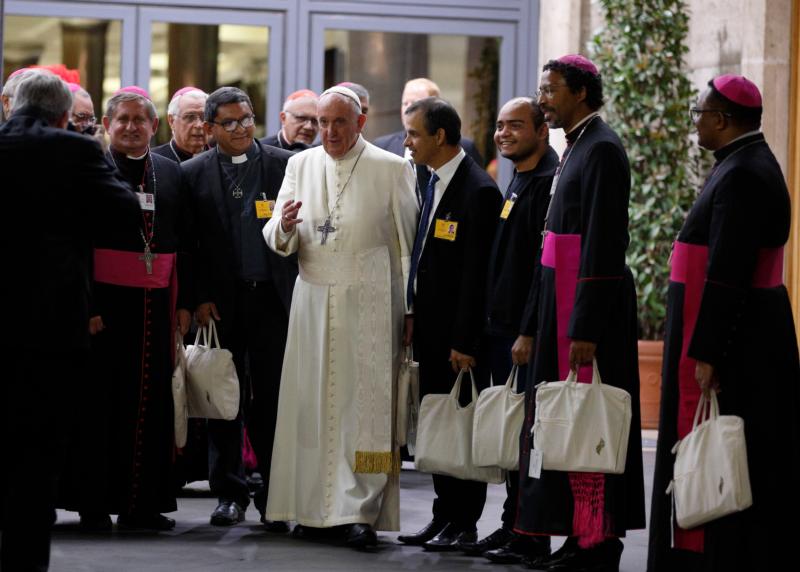 Pope Francis poses for a photo as he leaves the final session of the Synod of Bishops for the Amazon at the Vatican Oct. 26, 2019. (CNS photo/Paul Haring)

VATICAN CITY (CNS) — Members of the Synod of Bishops for the Amazon asked that women be given leadership roles in the Catholic Church, although they stopped short of calling for women deacons.

In the Amazon, like in the rest of the world, the essential roles women play within the family, the community and the church should be valued and recognized officially, members of the synod said in their final document.

The document, which synod members voted on Oct. 26, included a call for the creation of “the instituted ministry of ‘woman community leader,'” something they said would help meet “the changing demands of evangelization and community care.”

Speaking after the vote on the document, Pope Francis said the synod’s discussion on women “falls short” of explaining who women are in the church, particularly “in the transmission of faith, in the preservation of culture. I would just like to underline this: that we have not yet realized what women mean in the church,” but instead “we focus on the functional aspect, which is important,” but is not everything.

Synod members also asked Pope Francis to revise St. Paul VI’s 1972 document on ministries, “Ministeria Quaedam” (“Some Ministries”), so that women could be installed formally as lectors and acolytes and in any new ministries to be developed.

The final document also asked that “the voice of women be heard, that they be consulted and participate decision making” in the church.

“It is necessary for the church to assume with greater strength their leadership within the church and for the church to recognize and promote it by strengthening their participation in the pastoral councils of parishes and dioceses, or even in instances of government,” the document said.

While noting that a “large number” of participants in the pre-synod consultations asked for women deacons and that several members of the synod itself made such a call, the final document did not include an explicit request for such a move.

Instead, the document asked that Amazon synod members be able “to share our experiences and reflections” with members of the commission Pope Francis set up in 2016 to study the role and ministry of women deacons in the New Testament and in early Christian writings.

In May Pope Francis told reporters that the 12 theologians and historians on the commission were unable to reach a full consensus on whether “there was an ordination with the same form and same aim as the ordination of men,” but more study was needed.

In his post-vote talk to synod members, the pope gave the same explanation, but promised that he would have the Congregation for the Doctrine of the Faith “reconvene the commission or perhaps open it with new members.”

Pope Francis originally set up the commission at the request of the women’s International Union of Superiors General, and he told the synod he gave the commission’s report to the UISG, but he promised to “pick up the gauntlet” thrown down by women at the synod who asked for further discussion.

Quoting a speech from Pope Paul in 1965, the final document said, “The hour is coming, in fact has come, when the vocation of woman is being achieved in its fullness.”

That is especially true in the Amazon, where women lead communities, educate children, teach the faith, proclaim the Gospel and work diligently to protect the environment and preserve indigenous cultures, they said.

When many women are “victims of physical, moral and religious violence, including femicide, the church commits to defense of their rights and recognizes them a protagonists and guardians of creation,” synod members said.

The document’s discussion on Catholic ministry and mission in the Amazon urged greater formation of lay men and women, emphasizing their baptismal vocation to be “missionary disciples.” Laywomen, like laymen, must be involved in the “small ecclesial missionary communities that cultivate faith, listen to the Word and celebrate together the life of the people.”

Without specifying further, the document said that “it is urgent for the church in the Amazon to promote and confer ministries for men and women in an equitable manner.”

The Pan-Amazonian Church Network, which helped prepare the synod, released a long statement Oct. 26 signed by its president and vice president: Brazilian Cardinal Claudio Hummes, who was relator general of the synod; and Cardinal Pedro Barreto Jimeno of Huancayo, Peru, one of the delegated presidents of the synod.

“The life of indigenous peoples in general, and of women in particular, have given a totally different tone, more alive, renewed and brave to this synod,” they said. “Their clarity, the testimony of their lives, their spiritual connection with the Amazon and their courageous cry for change” have left “an indelible mark on this synod.”

“We still have a long way to go to give these voices the space they deserve,” the cardinals said, highlighting especially the “voice of women” who are “valiantly dedicated to life.”