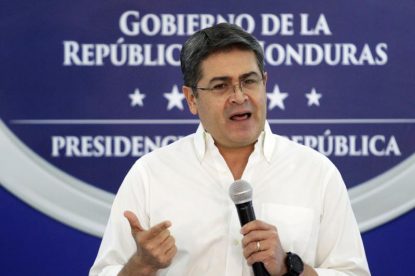 “With deep pain we confirm how ‘the scourge of narcotics trafficking,’ as Pope Francis has called it … is a reality, which has permeated our country’s institutions and, as a consequence, has caused an accelerated deterioration of our nation’s image,” the Oct. 11 statement said.

“Nothing of what narcotics trafficking has gained in our country could have been done without the collusion of government bodies, which, by reason of being, are called to defend life and provide security to everyone,” the statement continued.

“We must admit that in much of this, politicians are guilty of having colluded with organized crime.”

Tony Hernandez has pleaded not guilty. The president is not charged with any crimes and denies all accusations of wrongdoing. He has said drug cartel bosses are trying to seek revenge on him for launching a crackdown on their activities.

The trial, however, has exposed the influence of illegal drug money in Honduran political campaigns, regardless of party.

The case has reignited outrage with the president in Honduras. Hernandez won reelection in 2017 after petitioning the supreme court to allow him to run for a second term, then claiming a scandal-plagued vote. He subsequently cracked down on protesters.

Subsequent protests calling for his ouster have also been organized — and suppressed. A movement of physicians and teachers formed over the summer to protest rampant graft in the health system, which included funds embezzled from the Honduras Social Security Institute that ended up in Hernandez’s 2013 campaign.

“The trial has raised hopes a little,” said Ismael Zepeda, an economist with FOSDEH, a Honduran think tank. “At least it’s shaking our country’s corrupt economic and political class.”

Since taking office, Hernandez has boasted of a sharp drop in the homicide rate, which topped 80 per 100,000 people earlier this decade.

The U.S. government also has seen him as an ally; former Acting Homeland Security Secretary Kevin McAleenan called Hernandez “a strong partner.” Honduras recently agreed to an immigration pact with the United States, which would allow the U.S. government to send asylum-seekers from some third countries to Honduras.

The deal was struck even though outward migration has increased from Honduras since Hernandez’s reelection as people flee poverty and violence.

“With pain and sorrow, we contemplate the terrible ordeal of so many migrant brothers,” the bishops’ statement said. “It hurts to recognize what Honduras most exports are human beings, moved by the hope of a better and more secure life.”

The statement added, “We make a strong call to the consciences of all actors involved, directly and indirectly, in the present crisis so that they review the value of healthy patriotism, which must be above any personal interests, loyalty to positions or party interests.