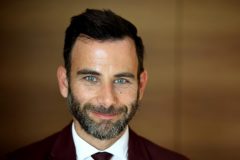 Jean-Philippe Perreault, a professor at Laval University’s Faculty of Theology and Religious Studies in Quebec City, is pictured in an Oct. 9, 2019, photo.  (CNS photo/Philippe Vaillancourt, Presence)

QUEBEC CITY (CNS) — Many experts fear the Quebec government’s legislation on education will further dismiss religion and spirituality from the province’s schools.

Among the changes announced in a bill presented Oct. 1, the government plans to abolish the Ministry of Education’s religious affairs advisory committee and to remove all references to spirituality from the Education Act.

The legislation, Bill 40, coincides with ongoing debates about the place of religious beliefs in schools, especially after the adoption in June of a secularism bill that prohibits teachers from wearing religious symbols during work hours.

“At a time when Bill 21 on secularism in the school system is being applied, when the future of the ethics and religious culture course is being questioned, the government is abolishing the committee that is able to give notices on these issues,” said Jean-Philippe Perreault, a professor at Laval University’s Faculty of Theology and Religious Studies. A specialist in ethics and religious culture, Perreault is a member of the Religious Affairs Committee.

In 2000, in the wake of the deconfessionalization of the Quebec school system, the two former Catholic and Protestant committees of the Ministry of Education were replaced by the Religious Affairs Committee, whose role became only advisory.

When asked to explain why the current Quebec government intends to abolish the committee, Esther Chouinard, communications officer for the Ministry of Education and Higher Education, replied: “The committee’s opinion has not been sought since 2007.”

The last chair of the committee, Marie-Andree Roy of the Department of Science and Religion at the University of Quebec at Montreal, who stepped down in 2013, does not think the government is making the right decision.

“The committee made a significant contribution to the establishment of the Ethics and Religious Culture program. It has produced various very relevant studies on issues related to religion in schools, but was generally met with radio silence from the ministers,” she said, stressing that the committee still exists by law, even though the government has been ignoring it for a few years.

The first chair of the committee, Jean-Marc Charron, a specialist in the psychology of religion at the University of Montreal, had even advocated unsuccessfully for the creation of an equivalent committee for all departments.

“Religious issues are regularly in the news, and the misunderstanding of political leaders in this field amply justifies the existence of a forum for advice for the entire government apparatus,” he said.

If Bill 40 is adopted as it stands by the Quebec Parliament, the section that states that a student “is entitled to complementary services of spiritual animation and community engagement” will be repealed from the Education Act, as will the section that states that the school “must facilitate the student’s spiritual development in order to foster his or her development.”

This worries spiritual life and community engagement leaders, who replaced pastoral agents in schools two decades ago. Some said they fear it will open the door to the elimination of their jobs.

But Chouinard said amendments to the legislation “would have no impact on maintaining the function or on student services.”

She also confirmed that “the additional service of spiritual animation and community engagement is one of the 12 complementary services officially provided” in the province and “would remain so if the bill is adopted.”

Contributing to this story was Francois Gloutnay in Montreal.

Vaillancourt is editor of Presence info; Gloutnay is a reporter for the agency.

PREVIOUS: Pope: Evangelization must help, not hinder, people getting closer to God