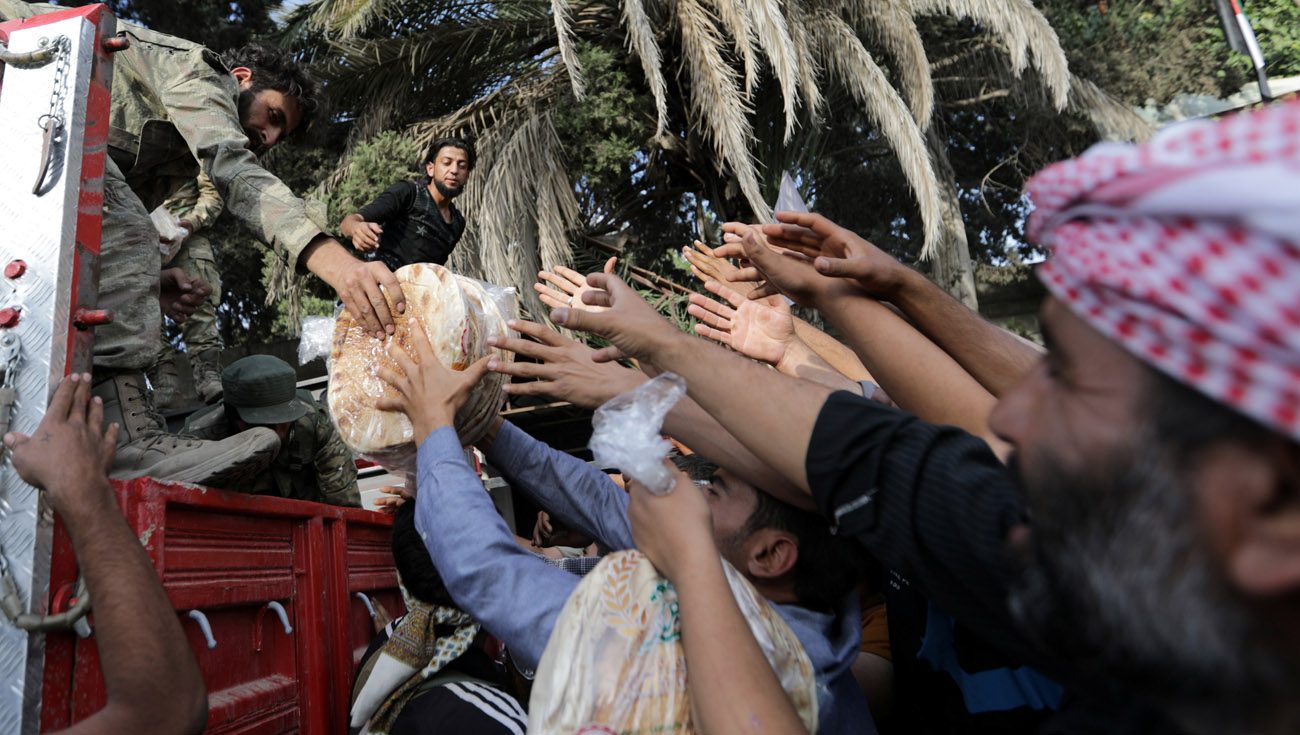 Turkey-backed Syrian rebel fighters hand bread to civilians in the border city of Tal Abyad, Syria, Oct.15, 2019. Humanitarian concerns are growing as people caught in the crosshairs of the Turkish incursion into northeastern Syria try to flee for safety, and groups are scrambling to aid them. (CNS photo/Khalil Ashawi, Reuters)

AMMAN, Jordan (CNS) — Humanitarian concerns are growing as people caught in the crosshairs of the Turkish incursion into northeastern Syria try to flee for safety, and groups are scrambling to aid them.

“There are big concerns about what is going on in northeastern Syria with the Turkish military aerial assaults and ground operations,” Father Emanuel Youkhana told Catholic News Service by phone from northern Iraq, bordering the area.

Father Youkhana, a priest, or archimandrite, of the Assyrian Church of the East, runs Christian Aid Program Northern Iraq (CAPNI), a Christian program for displaced Iraqis around the city of Dahuk.

The U.N. refugee agency, UNHCR, has reported that so far 1,000 Syrians have fled over the border into northern Iraq.

“The numbers are increasing,” Father Youkhana said. “CAPNI staff are on the border of Fishkhabur, and they are set up now in the camps to assist those fleeing.”

Fishkhabur is a town on the northwestern edge of Iraqi Kurdistan, principally inhabited by Chaldean Catholic Assyrians and some Kurds.

Karl Schembri, a spokesman for the Norwegian Refugee Council, described the situation to CNS: “The situation for many of the people is utter chaos: fear gripping the entire area, not know what is going to happen next, where the next attacks will be. A lot of … displacement happening, the latest figures speak of around 200,000 people because of the fighting. There have been displacement camps that have closed down with people evacuated to other areas, which are hopefully safer.”

“Where can (we) go except here?” Omar Boobe Hose, a refugee from the northern Syrian town of Ras al-Ayn, which has seen heavy fighting, told the Associated Press. “We can’t go to Turkey, because they are our enemy, and the other side is also our enemy, the Syrian (government) side. Where can we go? We have only here. There are no other places for Kurds.”

About 50,000 Syrian refugees are expected to cross into northern Iraq over the next six months, according to the UNHCR. The migration is spurred by the Turkish military operation, which is using Syrian militants from Islamic State and al-Qaida as part of its ground troops fighting Kurdish and Syriac Christians of the Syrian Democratic Forces.

The Syrian Democratic Forces were, until recently, America’s ally in fighting Islamic State in Syria and ending its territorial caliphate there. The forces lost about 11,000 fighters waging war against the terror group. The U.S. troop pullback and Turkish offensive has raised fears of an Islamic State resurgence.

UNHCR said it so far has aided some 32,000 of the hundreds of thousands of civilians displaced by the fighting and Turkish bombardments in Syria’s northeast, mainly in Hassakeh, Qamishli, and Tal Tamer, by meeting basic needs.

But it also has mobilized protection teams to provide “psychological first aid and psychosocial support” to the many who were forced to leave “their homes without papers and other belongings” due to the suddenness of the Turkish military assault. “Families have also been separated,” the UNHCR reported.

Nearly all foreign aid workers reportedly have been evacuated because of security concerns, and there are fears that local staff could face reprisals, either at the hands of Turkish-led forces or its Syrian allied troops.

Schembri said the withdrawal of workers “is putting lives in danger, because there are at least 100,000 displaced (Syrians) due to previous fighting in the Syrian crisis who were completely dependent on humanitarian aid. So they depend on aid agencies for water, food, medical aid and shelter. Most of these services have been suspended because of the uncertainty and lack of safety for aid workers. Every day that passes without these aid services resuming is putting lives at risk in itself, not to mention the fighting that has already killed civilians.”

Bishop Georges Khazen, apostolic vicar of Aleppo for the Latin-rite Catholic Church, said the United States “has betrayed the Kurdish people” and insisted that Turkey’s incursion into northeastern Syria will lead to a new exodus, forcing Christians and other minorities out.

“Jihadis (Islamist militants) operate and fight under the auspices of the Turkish army. They (the Turks) claim they want to repatriate Syrian refugees to places where other peoples and communities already live,” Bishop Khazan told AsiaNews, a Rome-based missionary news agency. He said the Turkish military’s goal “is ethnic cleansing.”

“These wars do not solve problems; on the contrary, they lay the foundations for other, bigger ones,” he said, voicing his fear that Turkey’s interference in Syria will not stop with the so-called safe zone it is trying to establish for 2 million Syrian refugees from other regions who now live in Turkey.

Siban Sallo, a local Yazidi activist and journalist, reported that more than 500 Yazidis had been displaced in eight out of 15 Yazidi villages extending across Syria’s northeastern border with Turkey. Three Syriac-Christian villages in the vicinity also emptied out after the conflict began.

The resolution asked the U.S. to support communities that have been displaced by the conflict with humanitarian assistance and called on Turkish President Recep Tayyip Erdogan to immediately halt military action in the region. U.S. Treasury Secretary Steven Mnuchin said Washington would impose further sanctions on Turkey if a cease-fire in northeastern Syria is not established.

PREVIOUS: Celibacy is a gift, not an obstacle, indigenous priest says

NEXT: Renew commitment to peace in Syria, U.S. archbishop pleads to world