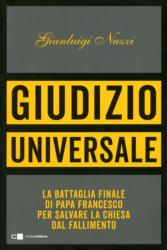 VATICAN CITY (CNS) — An Italian author who was once tried and acquitted by a Vatican court for publishing leaked documents is claiming in a new book that decades of mismanagement, shady deals and decreasing donations will leave the Vatican no choice but to default.

Titled “Giudizio Universale” (“Universal Judgment”), the book by Gianluigi Nuzzi is based on 3,000 pages of confidential documents he claims to have collected since 2013.

In the book’s first chapter, Nuzzi recounts a May 2018 meeting of members of the Secretariat for the Economy in which they are told that “the recurring and structural deficit has reached worrying levels and risks leading to default in the absence of urgent action.”

Without radical change, Nuzzi claims, the Vatican will be in default by 2023 and, as a result, Vatican employees will lose their pensions.

Presenting his book Oct. 21, Nuzzi said it is not an attack on the Catholic Church but is against the institutional corruption that has continuously impeded Pope Francis from enacting meaningful financial reforms within the world’s smallest state.

The book claims the Vatican’s financial woes are due in part to the mismanagement of its investment portfolio and its real estate holdings by the Administration of the Patrimony of the Holy See, known by its Italian acronym APSA.

Nuzzi said that documents he obtained prove that of the nearly 3,000 properties owned by APSA, 800 buildings are empty while some others are rented free of charge. The mismanagement of property, he added, resulted in a loss of 22.6 million euros (US$25.1 million) in 2018.

However, Bishop Nunzio Galantino, president of APSA, dismissed Nuzzi’s claims, saying that while they make for a good book launch, the accusations are hardly an accurate description of “an articulated and complex reality like the church.”

In an interview Oct. 22 with Avvenire, the daily newspaper of the Italian bishops’ conference, Bishop Galantino said the allegations of mismanagement and claims that the Vatican is on the brink of financial collapse are “not true.”

“The current (financial) situation of the Holy See is no different than that of any family or even states in different continents,” he said. “At a certain point, one must look at what is spent, what is brought in and try to rebalance the expenses.”

Whether in surplus or deficit, he added, APSA’s balance sheet “is not the result of stealing, cunning and misguided management.”

“The supervisory instruments put in place by Pope Benedict XVI and strengthened by Pope Francis are making it possible to put in order the management of this patrimony to balance expenditures and income and, where necessary, to correct practices with respect to the responsibilities of the administrative bodies of the Holy See,” he said.

The Vatican has two special sources of income to which Catholics contribute: the Peter’s Pence collection, which is used by the pope for charity and emergency assistance; and the contributions dioceses around the world make to support the work of the Vatican.

Nuzzi claims in his book that an estimated 58% of the donations to the Peter’s Pence collection were used “not for works of charity, but to fill in the (financial) gaps of the (Roman) Curia.”

He had made similar claims in his book, “Merchants in the Temple,” published in December 2015. A few weeks later, Cardinal Angelo Becciu, who was then an official of the Vatican Secretariat of State, responded, saying that if the Vatican were to earmark, for example, 60% of the funds to charity “we would have to immediately fire 400 people” out of the current 4,000 Vatican employees.

The Vatican amended its laws to making leaking “news and documents” a crime in the wake of the first so-called “VatiLeaks” trial in 2012 when Pope Benedict XVI’s butler was charged with “aggravated theft” for giving Vatican documents and papal correspondence to Nuzzi.

Publication of two books focused on financial irregularities — Nuzzi’s “Merchants in the Temple” and Emiliano Fittipaldi’s “Avarice” — led to both writers being charged by a Vatican court of “soliciting and exercising pressure” on a Vatican employee in order to obtain confidential documents.

However, citing freedom of the press, the court acquitted both journalists in July 2016.

NEXT: Cardinal talks about listening at the synod, being loyal to the pope