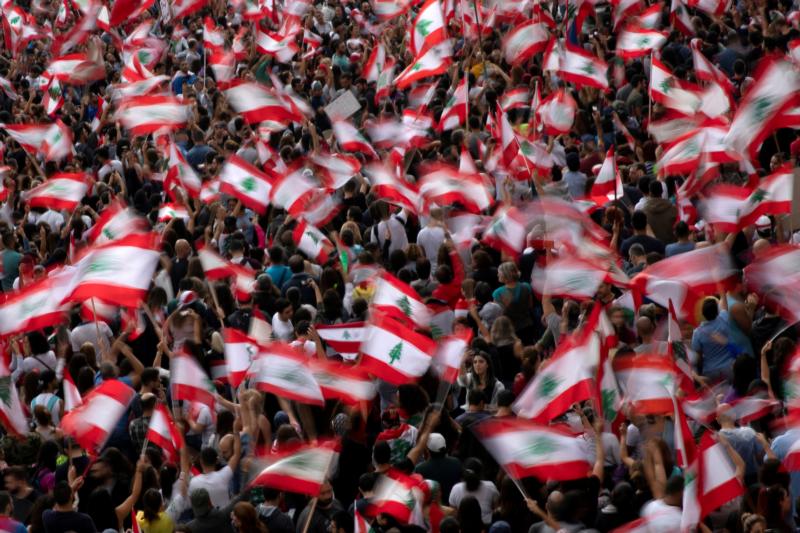 BERUIT (CNS) — Lebanon’s Maronite bishops, commending the unity of the Lebanese people amid a peaceful mass uprising demanding a new government, called for a “constructive spirit” following the resignation of the country’s prime minister.

“The Lord is leading the ship of the homeland and we hope that this step will be the beginning of the solution,” Cardinal Bechara Rai, Maronite patriarch, said in response to the resignation of Saad Hariri.

The resignation Oct. 29 came on the 13th day of massive countrywide protests that found demonstrators celebrating by filling streets and public squares and waving Lebanese flags.

The protests found Christians, Muslims and Druze rising up against a deteriorating economic situation and corruption in the government.

Cardinal Rai convened a meeting of the Maronite bishops Oct. 30 at the patriarchate north of Beirut in which they expressed their “sincere tribute” to the people “who are protesting from all sects and regions of Lebanon, coupled with the support of their valid demands.”

The bishops, in a statement, said they hope that all Lebanese will receive the resignation “in a constructive spirit.” They called on political officials “to rally around” Lebanese President Michel Aoun “who is entrusted with the constitution, to speed up the taking of the necessary constitutional measures to protect Lebanon, in response to the aspirations of all Lebanese.”

The prelates commended the Lebanese people for discovering “how united they are, united by a set of principles and values derived from their diverse beliefs, under the banner of one nation, the Constitution” as well as the 1989 Charter of Lebanese National Reconciliation and “their shared demands.”

They called on the Lebanese “to be wise, so that their sit-ins do not paralyze life in the country,” urging the people to stay clear of “provocation and all signs of conflict and violence.”

Banks, schools and most businesses have been closed since the uprising began Oct. 17.

The prelates thanked Pope Francis “for his good and noble attitude toward the Lebanese uprising.”

Following the Angelus prayer at the Vatican Oct. 27, Pope Francis sent “a special thought to the dear Lebanese people, in particular to young people, who in recent days have made their cry heard in the face of challenges and the social, moral, and economic problems of the country.”

The pope urged all of Lebanon “to seek the right solutions along the path of dialogue.”

A resolution to the crisis in Lebanon, Pope Francis said, would be “for the benefit of the entire Middle East region, which suffers so much.”

Commencing with the ringing of church bells throughout the country at 5:30 p.m., Oct. 27, Cardinal Rai urged the faithful to pray the rosary each day at that time. In leading the rosary following Hariri’s resignation Cardinal Rai said, “We have said from the beginning that our strength and arms are the rosary.”

PREVIOUS: There’s a map for that: GoodLands launches Catholic GeoHub

NEXT: Pope adds feast of Our Lady of Loreto to church calendar