Pope adds feast of Our Lady of Loreto to church calendar 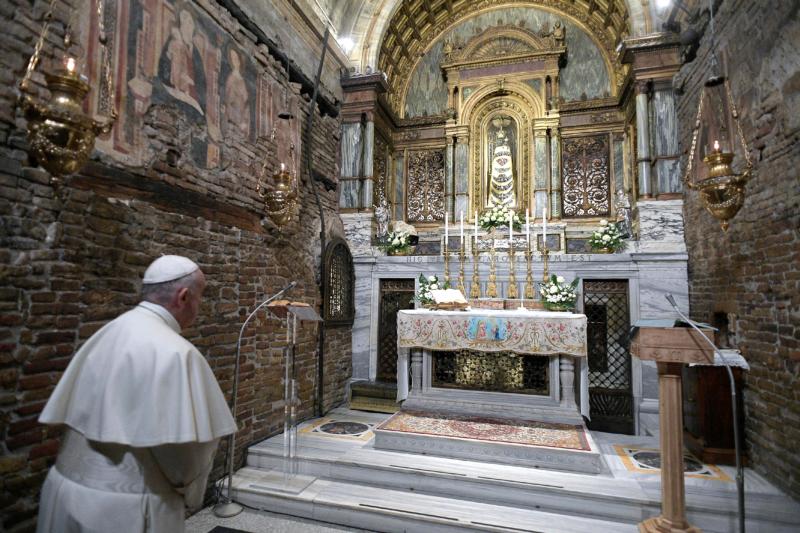 Pope Francis prays before a statue of Our Lady of Loreto at the Sanctuary of the Holy House on the feast of the Annunciation in Loreto, Italy, March 25, 2019. Pope Francis has approved adding the Dec. 10 feast of Our Lady of Loreto to all calendars and liturgical books for the celebration of the Mass and the Liturgy of the Hours. (CNS photo/Vatican Media via Reuters)

VATICAN CITY (CNS) — Pope Francis has approved adding the Dec. 10 feast of Our Lady of Loreto to all calendars and liturgical books for the celebration of the Mass and the Liturgy of the Hours.

Putting the celebration of the feast day on the universal calendar “will help all people, especially families, youth and religious to imitate the virtues of the perfect disciple of the Gospel, the Virgin Mother, who, in conceiving the head of the church also accepted us as her own,” the decree said.

The decree, dated Oct. 7, feast of Our Lady of the Rosary, was published Oct. 31 by the Vatican Congregation for Divine Worship and the Sacraments.

According to tradition, the Holy House of Loreto was carried by angels from Nazareth to the Italian hillside town of Loreto the night of Dec. 9-10 in 1294 after making a three-year stop in Croatia.

Tradition holds that the small house, made of three stone walls, is the place where Mary was born, where she was visited by an angel and conceived Jesus through the Holy Spirit, and where the Holy Family later lived.

The decree said the shrine in Loreto “recalls the mystery of the Incarnation” and helps visitors “meditate both on the words of the angel announcing the Good News and on the words of the Virgin in response to the divine call.” And it has been able to “illustrate powerfully the evangelical virtues of the Holy Family,” it added.

Millions of pilgrims flock to Loreto each year to venerate the tiny cottage. It is Italy’s most important and popular Marian shrine city and it was one of the shrines St. John Paul II visited the most. 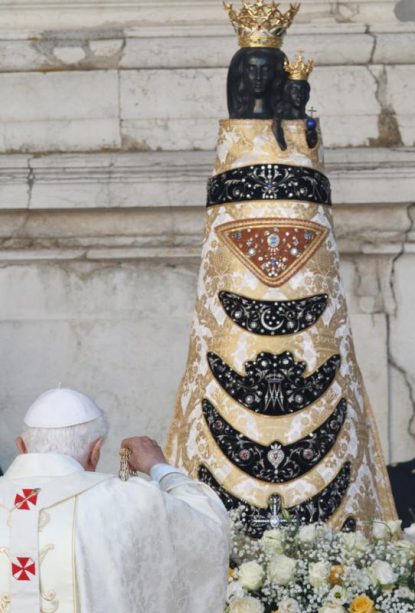 Pope Benedict XVI uses incense in front of a statue of Our Lady of Loreto as he celebrates Mass outside the Sanctuary of the Holy House in Loreto, Italy, Oct. 4, 2012. (CNS photo/Paul Haring)

“Before the image of the Mother of the Redeemer and of the church, saints and blesseds have responded to their vocation, the sick have invoked consolation in suffering, the people of God have begun to praise and plead with Mary using the Litany of Loreto, which is known throughout the world,” the decree said.

“In light of this, Pope Francis has decreed, by his own authority, that the optional memorial of the Blessed Virgin Mary of Loreto should be inscribed in the Roman Calendar on 10 December, the day on which the feast falls in Loreto, and celebrated every year.”

“Therefore, the new memorial must appear in all calendars and liturgical books for the celebration of Mass and the Liturgy of the Hours.”

Liturgical texts for the feast day were published in Latin with the decree, which said the translations would be approved by bishops’ conferences and then published after confirmation by the Vatican dicastery.

Custodians of the shrine have said the stones of the house were removed from the Holy Land and carried by ship by a member of the Angeli family.

Despite the possibility that the house came by way of ship, Our Lady of Loreto is still the patron saint of aviation and air travel.

NEXT: Franciscan brother in Kenya named U.N. Person of the Year in Africa