Mission is to make disciples for Christ, not for one’s group, pope says 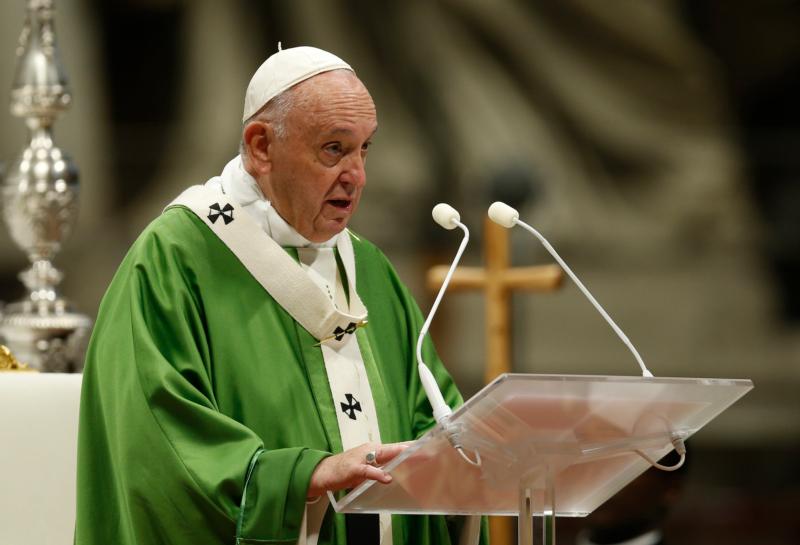 VATICAN CITY (CNS) — Every Christian is called to be a missionary, sharing the good news of salvation in Christ and making disciples for him, not for oneself or one’s clique of like-minded believers, Pope Francis said.

“What instructions does the Lord give us for going forth to others? Only one, and it’s very simple: Make disciples. But, be careful: his disciples, not our own,” the pope said Oct. 20 as he celebrated World Mission Sunday.

Dozens of participants from the Synod of Bishops for the Amazon joined the pope for the Mass in St. Peter’s Basilica; many indigenous wore their native headdresses, had their faces painted or dressed in traditional clothes.

Before reciting the Angelus prayer after Mass, Pope Francis recalled the 100th anniversary of Pope Benedict XV’s apostolic letter on mission, “Maximum Illud.” The letter, Pope Francis said, was motivated by his predecessor’s conviction of “the need to evangelically relaunch the church’s mission in the world so that it would be purified of any colonial incrustation and freed from the influences of the expansionist policies of European nations.”

Today, he said, the letter calls Catholics “to overcome the temptation of every self-referential closure and every form of pastoral pessimism in order to open us to the joyful newness of the Gospel.”

At a time when globalization seems more about “homogenization” and power struggles that breed conflict and “ruin the planet” rather than solidarity and respect for differences, Pope Francis said, Christians must be missionary disciples who share the Gospel with humility and respect.

The pope asked Catholics to commit themselves to a new effort to proclaim “the good news that in Jesus mercy defeats sin, hope defeats fear, brotherhood defeats hostility.”

“Christ is our peace,” the pope said, “and in him every division is overcome; in him alone there is salvation for every person and all people.”

In his homily at the Mass, Pope Francis said Christians are called to share God’s love and mercy with all people. “All, because no one is excluded from his heart, from his salvation. All, so that our heart can go beyond human boundaries and particularism based on a self-centeredness that displeases God. All, because everyone is a precious treasure, and the meaning of life is found only in giving this treasure to others.”

“Those who bear witness to Jesus go out to all, not just to their own acquaintances or their little group,” he said.

The call to be a missionary is a call that is included in every Christian’s baptism, the pope said, telling people at the Mass: “Jesus is also saying to you: ‘Go, don’t miss a chance to bear me witness!’ My brother, my sister, the Lord expects from you a testimony that no one can give in your place.”

The first and most important way to share the Gospel with others is by living it, he said. “A credible proclamation is not made with beautiful words, but by an exemplary life: a life of service that is capable of rejecting all those material things that shrink the heart and make people indifferent and inward-looking; a life that renounces the useless things that entangle the heart in order to find time for God and others.”

Being a missionary disciple, he said, does not mean “conquering, mandating, proselytizing,” but rather “witnessing, humbling oneself alongside other disciples and offering with love the love that we ourselves received.”

“Our mission,” he said, is “to give pure and fresh air to those immersed in the pollution of our world; to bring to earth that peace which fills us with joy whenever we meet Jesus on the mountain in prayer; to show by our lives, and perhaps even by our words, that God loves everyone and never tires of anyone.”

PREVIOUS: Women’s role in Amazon church does not depend on diaconate, sisters say