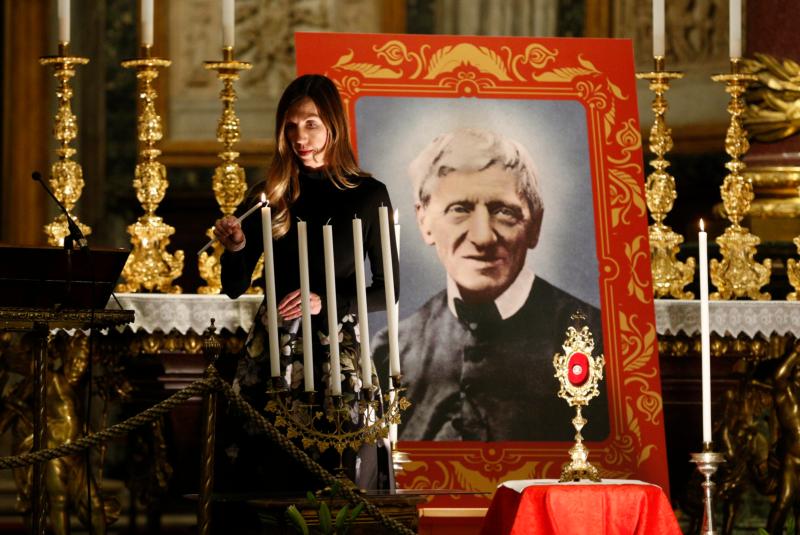 ROME (CNS) — St. John Henry Newman’s insights into the function and meaning of conscience “could not be more timely” given widespread moral confusion in the Western world, said Sydney Archbishop Anthony Fisher.

Speaking at an Oct. 12 symposium at the Dominican-run Pontifical University of St. Thomas Aquinas, commonly called the Angelicum, Archbishop Fisher said Cardinal Newman’s theology of conscience offered an antidote to the moral relativism that was convulsing many societies.

The power of Cardinal Newman’s teachings, he said, could be seen in the witness of the White Rose, an anti-Nazi movement in wartime Germany, which found the courage to defy Adolf Hitler partly after studying the new saint’s writings on conscience.

Sophie Scholl, the most famous member of the White Rose, was just 21 years old when she was beheaded in Stadelheim Prison, Munich, in February 1943 after she and her brother, Hans, flooded the famous Lichthof (atrium) of Munich University with leaflets inciting students to oppose Nazism.

“In 1942, she gave a volume of Newman’s sermons as a parting gift to her boyfriend, Fritz Hartnagel, when he was sent to the Eastern Front,” Archbishop Fisher said.

“Fritz wrote to Sophie from the horrors of the battlefield that Newman’s writings were ‘like drops of precious wine,'” words scholars identified as coming verbatim from a sermon given by Newman called “The Testimony of Conscience.”

Archbishop Fisher said that on the strength of such teachings, Cardinal Newman, who was canonized Oct. 13, was already “celebrated by many people as worthy of doctor of the church and specifically doctor of conscience.”

He said that, to Cardinal Newman, conscience was not an “inbuilt sat-nav” or like the good angel who stood on the shoulder of Fred Flintstone and whispered advice into his ear.

“In our day, when an intellectual and moral relativism threatens to sap the very foundations of our society, Newman reminds us that, as men and women made in the image and likeness of God, we were created to know the truth and find in that truth the ultimate freedom and deepest fulfilment,” said Archbishop Fisher.

His talk was the second time the symposium reflected on the White Rose.

Earlier, George Weigel of the Ethics and Public Policy Center in Washington, D.C., told how the nonviolence and Christian resistance of the movement “was formed in part by a serious spiritual and intellectual encounter” with Newman.

“There is a lot of talk in the 21st century church about conscience, and Newman is invoked by many prominent personalities in those debates,” Weigel said.

“So it might be useful for all concerned to ponder on Newman’s influence on these contemporary martyrs. What did the members of the White Rose learn from Newman about conscience?” he asked.

The evening of Oct. 12, thousands gathered in the Basilica of St. Mary Major for a vigil of prayer ahead of the canonization.

Among the guests was Melissa Villalobos, a Chicago mother of seven who was inexplicably healed from a potentially fatal hemorrhage that also threatened to take the life of her unborn child.

The bleeding stopped when she prayed urgently to Cardinal Newman, and the healing was recognized as the miracle needed to canonize the saint.

Villalobos read one of the bidding prayers while 5-year-old Gemma, the daughter who was saved by the healing, watched with her brothers and sisters and David, her father.