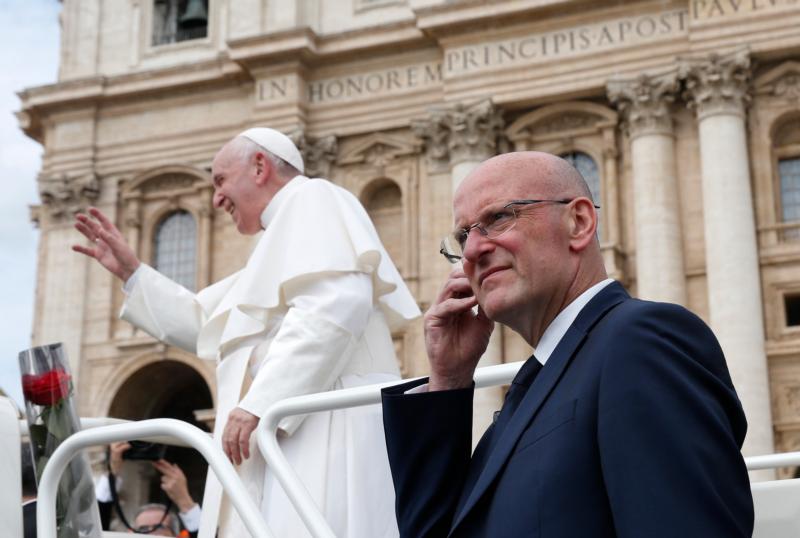 Domenico Giani, lead bodyguard for Pope Francis and head of the Vatican police force, keeps watch as the pope leaves his general audience in St. Peter’s Square at the Vatican May 1, 2019. Pope Francis accepted the resignation of Giani Oct. 14, nearly two weeks after an internal security notice was leaked to the Italian press. (CNS photo/Paul Haring)

The Vatican announced Oct. 14 that the pope accepted the resignation of the 57-year-old Vatican police chief who, although “bears no personal responsibility” for the leak, “tendered his resignation to the Holy Father out of love for the church and faithfulness to Peter’s successor.”

The pope accepted Giani’s resignation, and in a conversation with him, “expressed his appreciation to the commander for his gesture.”

“Pope Francis also recalled Domenico Giani’s 20 years of unquestionable faithfulness and loyalty and underlined how, by offering an outstanding witness in many parts of the world, Commander Giani was able to establish and guarantee a lasting atmosphere of ease and security around the Holy Father,” the Vatican said.

The day after the announcement, the Vatican announced that the pope named deputy Vatican police chief Gianluca Gauzzi Broccoletti as Giani’s replacement. Gauzzi, who has been a part of the Vatican police force since 1995, was also responsible for developing the Vatican’s cyber security network.

According to Vatican News, the pope also paid a surprise visit Oct. 15 to Giani and his family at their home in Vatican City after attending the afternoon session of the Synod of Bishops for the Amazon.

“Pope Francis’ visit confirmed the appreciation he has already expressed toward Giani and his family,” Vatican News said.

Giani’s resignation comes two weeks after L’Espresso, an Italian magazine, published what it said was an internal Vatican police notice about the “cautionary suspension” of five individuals after a raid Oct. 1 on offices in the Secretariat of State and the Vatican Financial Intelligence Authority.

The suspension order, which was signed by Giani, featured photos of one woman and four men, including Msgr. Mauro Carlino, head of information and documentation at the Vatican Secretariat of State, and Tomasso Di Ruzza, director of the Financial Intelligence Authority.

Matteo Bruni, director of the Vatican press office, had confirmed Oct. 12 that the pope ordered an investigation into the “illicit distribution of a document for internal use by the security forces of the Holy See.”

The seriousness of the leak, “in the words of Pope Francis, is comparable to a mortal sin since it is detrimental to the dignity of people and to the principle of the presumption of innocence,” Bruni told ANSA, the Italian news agency.

In an interview released by the Vatican shortly after the announcement, Giani said the leak caused the pope “serious pain” and that as commander, “I, too, was ashamed of what had happened and of the suffering caused to these people.”

“For this reason, having always said and witnessed that I am ready to sacrifice my life to defend that of the pope, with the same spirit I decided to relinquish my duty so as not to damage the image and activity of the Holy Father in any way,” he said.

Giani said that in the fallout over the leak, the pope continued to show him the paternal concern, which has “marked the special relationship that I have had with him since the beginning of his pontificate.” He also said the pope took into consideration “personal difficulties” he had been facing, particularly his “desire to devote more time to my family, my wife and my children.”

A former officer in the Italian intelligence service, Giani began his Vatican career in 1999 during St. John Paul II’s papacy, serving as deputy police chief under his predecessor, Camillo Cibin.

In 2006, he was appointed as Inspector General of the Vatican Gendarme Corps and had been a constant presence as personal bodyguard to Pope Benedict XVI and Pope Francis at the Vatican and during papal trips abroad.

Reflecting on his career protecting the lives of three popes, Giani said that despite “the moment of personal uncertainty I am living through,” divine providence will “show the way, which is certainly the path of the Lord,” and described his 20 years of service as “an honor.”

“If I close my eyes, I see endless scenes of the almost 70 international apostolic trips that I have followed, of countless pastoral visits to Rome and Italy and of so many private moments with the three pontiffs,” he said.

“I am deeply grateful to the Holy Father because his testimony of the loyalty, honor and fidelity with which I have done my service helps me to face the future and the new tasks that I may take on, within the scope of my skills, with serenity after this extraordinary experience,” Giani said.

NEXT: Ecuador’s president rolls back austerity measures that triggered protests