On feast of St. Francis, pope joins Amazonians to plant tree at Vatican 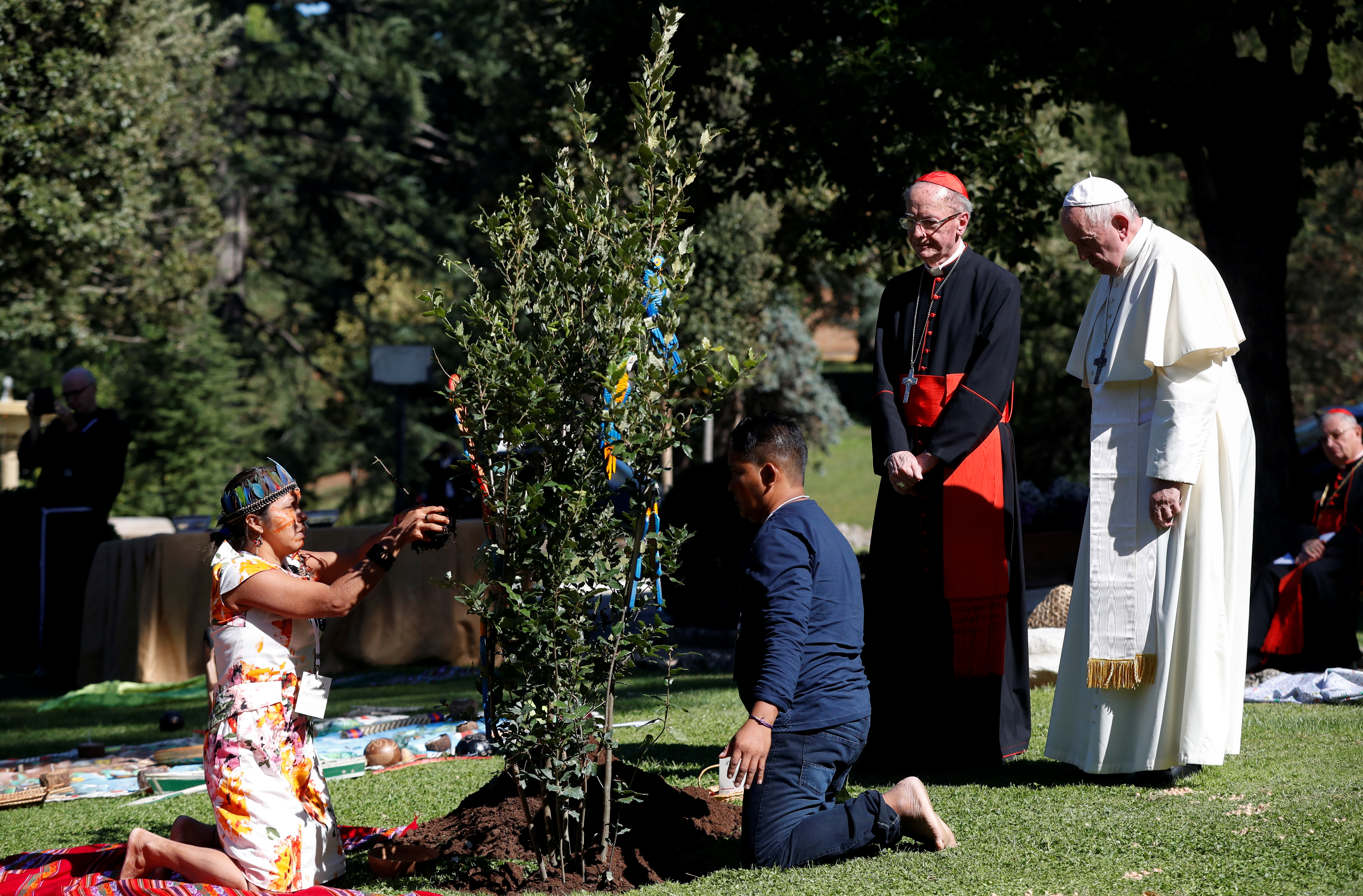 Pope Francis and Brazilian Cardinal Claudio Hummes, relator general of the Synod of Bishops on the Amazon, watch as members of an indigenous community plant a tree during a celebration marking the feast of St. Francis in the Vatican Gardens Oct. 4, 2019. (CNS photo/Yara Nardi, Reuters)

He also consecrated the Synod of Bishops for the Amazon to St. Francis. The synod will be held at the Vatican Oct. 6-27.

About 20 delegates from Amazonian countries opened the ceremony, singing and dancing around a mandala of Amazonian symbols that included a banner with a photograph of Notre Dame de Namur Sister Dorothy Stang, a missionary from Dayton, Ohio, who was murdered in Brazil in 2005 because of her defense of the land rights of small-scale farmers.

Members of various church groups brought offerings of soil from symbolic places, including the Amazon, which has a rich cultural heritage and is also a land where martyrs have died; India, a country vulnerable to climate change; countries where people are trafficked or forced to migrate; places where young people participate in climate change demonstrations; and the Shrine of the Renunciation in Assisi.

Ednamar de Oliveira Viana, an indigenous woman, and Jose Cristo de Oliveira, a farmer, both from Brazil, joined the pope and Cardinal Claudio Hummes of Brazil to spread the soil around a small holm oak tree from Assisi and sprinkle it with water.

“Pope Francis is sensitive to our people,” Viana said after the ceremony. When he refers to the earth as a common home, “he speaks a great deal about our life.”

In a reflection on the tree’s significance, Sister Liliana Franco of the Company of Mary, president of the Latin American and Caribbean Confederation of Men and Women Religious, said the time has come “to listen to the voice that the Spirit brings us from the Amazon.”

The pope appeared tired at the event, during which he sat under a blazing noonday sun. He stood to greet and receive a crucifix from Amazonian delegates and to shovel the first spadeful of soil around the tree.

Instead of the brief prepared remarks he was scheduled to deliver after the tree was planted, however, he simply prayed the Our Father and left in a car. The ceremony ended abruptly without the planned closing prayer and song.

The tree-planting ceremony marked the end of the “season of creation,” an annual period of prayer and action for the environment that is observed by various Christian churches between Sept. 1, the World Day of Prayer for the Care of Creation, and Oct. 4.

The ceremony was organized by the Order of Friars Minor, the Global Catholic Climate Movement and the Pan-Amazonian Church Network, which is holding various events in Rome during the synod.

PREVIOUS: Synod document is to aid discussion, not be church teaching, cardinal says