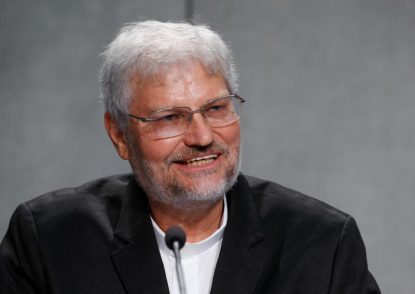 Bishop Evaristo Pascoal Spengler of Marajo, Brazil, attends a news conference after a session of the Synod of Bishops for the Amazon at the Vatican Oct. 25, 2019. (CNS photo/Paul Haring)

VATICAN CITY (CNS) — A change to the Code of Canon Law made by Pope Benedict XVI in 2009 provides a canonical path to allow the ordination of women deacons, a Brazilian bishop said.

Speaking to journalists at a synod press briefing Oct. 25, Bishop Evaristo Pascoal Spengler of Marajo said the revision was “an important step” in that it clarifies that those ordained to the diaconate fulfill a ministry of service rather than acting in the person of Christ.

The 2009 document, given “motu proprio,” on the pope’s own initiative, was titled “Omnium in Mentem” (“Everything in mind”) and revised several canons concerning the sacraments of holy orders and marriage.

In it, the now-retired pontiff added an article to canon 1009, stating that “those who are constituted in the order of the episcopate or the presbyterate receive the mission and capacity to act in the person of Christ the head, whereas deacons are empowered to serve the people of God in the ministries of the liturgy, the word and charity.”

“(Pope) Benedict XVI separated the diaconal ministry from Christ as head,” Bishop Spengler said. “Canonically, there is already a path for the ordination of a woman as a deacon, not as a priest or a bishop,” he added.

However, the bishop did not mention canon 1024, which states that “a baptized male alone receives sacred ordination validly.”

Various speakers at the synod have discussed new ways to address the lack of priests in the Amazon region, including by ordaining women to the diaconate and married men of proven virtue, or “viri probati,” to the priesthood.

Most of the small groups at the synod cited the activity of women as a “decisive factor in the life and mission of the church in the Amazon,” and one that must be recognized officially.

According to the reports published by the Vatican Oct. 18, four of the small groups explicitly called for the ordination of women deacons and three others said the church should study the possibility.

Bishop Spengler told journalists that not only is there a canonical path for the ordination of women deacons, but a historical precedent in the Bible, citing the presence of female prophets and judges in the Old Testament and deaconesses, such as Phoebe, in the New Testament.

Pope Francis in 2013 had appointed a commission of theologians and historians to study the early Christian deaconesses. In May, returning from a trip to the Balkans, he told reporters that the 12 members of the commission reached no consensus on whether “there was an ordination with the same form and same aim as the ordination of men.”

“Some say there are doubts,” the pope had said. “Well, then, let’s study some more. I don’t have a problem with that.”

Bishop Spengler said one thing there is no doubt about is that “the presence of women in the history of the church is important,” pointing to the fact that “we have more women saints than men.”

“If we look at the Amazon, more than 70% of those ministering are women, as catechists, ministers of the word and the Eucharist. Women are an important presence,” he said.

PREVIOUS: U.K. must do more to fight trafficking, bishop says after bodies found

NEXT: Indian nun who accused bishop of rape says he’s behind smear campaign