U.K. must do more to fight trafficking, bishop says after bodies found 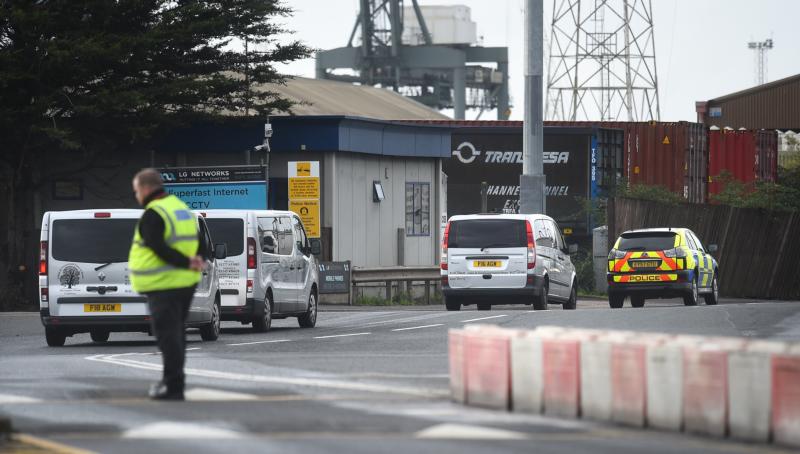 A convoy of funeral directors vehicles enter the Port of Tilbury in Essex, England, Oct. 25, 2019, to collect the bodies of the 39 people found inside a truck. The bodies of 31 men and eight women, all believed to be Chinese, were found Oct. 23 in a refrigerated container, no survivors were among them. (CNS photo/Kirsty O’Connor, PA Wire/PA Images via Reuters)

MANCHESTER, England (CNS) — The U.K. government must step up its efforts to provide sanctuary for migrants and to fight trafficking gangs in the wake of the discovery of a truck containing 39 frozen corpses, a bishop said.

The bodies of 31 men and eight women — all believed to be Chinese — were found Oct. 23 in a refrigerated container near Purfleet, a port on the River Thames. No survivors were among them.

They have not been identified but are believed to be people who were trying to enter the U.K. illegally, possibly with the help of criminal gangs. Liu Xiaoming, the Chinese ambassador to the U.K., has sent a team to the site near London to help police try to establish the identity of the victims.

Auxiliary Bishop Paul McAleenan of Westminster, the lead bishop for migration and asylum at the Bishops’ Conference of England and Wales, said the Catholic Church was praying for the victims and “for all those across the world who have lost their lives while trying to reach a better future.”

“This tragedy underscores the urgent need to redouble our efforts in establishing safe passages and combatting criminals who exploit desperate people,” he said.

Sarah Teather, the charity’s U.K. director, said: “This is devastating news. We know very little about the people who lost their lives at this point, but they are someone’s son, daughter, brother, sister, father, mother, friend or neighbor. We pray for those who died and for their families and friends.

“The desperation of those in the container is an indictment of our failure to provide sanctuary to those in flight for their lives,” she said in an Oct. 23 statement posted on the JRS website.

“This horrendous tragedy highlights the urgent need for more safe and legal routes to migrate and to seek asylum,” she said. “If the government wants to ensure this does not happen again, it is not enough to focus only on criminal gangs — it must ensure that those seeking sanctuary in Britain can get here safely. It must build bridges, not walls.”

“If you deny people safe and regular travel routes to find safety, you are leaving them with no choice but to risk their lives on utterly perilous journeys and in the hands of criminal gangs,” he said in an Oct. 23 statement.

“These gangs are a symptom of a much deeper problem — namely governments’ failure to provide safety to those who desperately need it,” Wren added. “As long as we think the answer to this tragedy is about building high walls and impenetrable borders, this will keep happening.”

Authorities began removing bodies from the container Oct. 24 and taking them to a nearby hospital for postmortem examinations. The 25-year-old driver of the truck is being held in police custody for questioning.

Media in the U.K. reported police raided three properties in Northern Ireland amid suspicion that criminal gangs were to blame for the tragedy.

The front part of the truck arrived in Wales from Dublin Oct. 20, and the trailer was carried by boat from Belgium Oct. 23.

Many Chinese nationals attempt to make their way to the U.K. in the hope of a better life but often end up enslaved into the black economy by criminal gangs who help smuggle them into the country.

PREVIOUS: Lebanon’s church leaders to protesters: ‘We hear your cry’