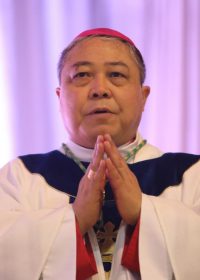 Pope Francis named Archbishop Bernardito Auza, who has represented the Vatican at the United Nations since 2014, to be nuncio to Spain and Andorra. Archbishop Auza is pictured in a June 16, 2018, photo. (CNS photo/Gregory A. Shemitz)

VATICAN CITY (CNS) — Pope Francis named Archbishop Bernardito Auza, who has represented the Vatican at the United Nations since 2014, to be nuncio to Spain and Andorra.

The Vatican made the announcement Oct. 1. It did not name a replacement as permanent observer of the Holy See to the United Nations.

A statement on the site of the Holy See Mission said the archbishop would take up his post in Madrid Dec. 1.

Archbishop Auza served at the Holy See Mission 2006-2008, before being named nuncio to Haiti, where he helped lead and rebuild after the January 2010 earthquake that killed at least 316,000 people.

In a statement, the Filipino archbishop described his time at the United Nations as “intense years of learning and understanding more deeply the great international questions of our time.” He said they also were years of “knowing and working with the Catholic Church in the tri-state area” of New York, New Jersey, Connecticut and beyond, in particular in ministering to the Filipinos and other migrant communities. He thanked New York Cardinal Timothy Dolan, as well as “all the other bishops with whom I have worked … the priests, men and women religious and all the people of God for their kindness, welcome and great spirit of collaboration and fraternity.”

As permanent representative to the United Nations, Archbishop Auza welcomed Pope Francis Sept. 25, 2015. Although as an observer he had no vote, he participated in the negotiations that led to the adoption of various international documents, such as the 2030 Agenda for Sustainable Development, the Addis Ababa Action Agenda on Financing for Development, the Paris Agreement on Climate Change, the Treaty on the Elimination of Nuclear Weapons, the Global Compact on Safe Orderly and Regular Migration and many others.

He also organized more than a dozen conferences a year on topics such as human trafficking, religious persecution, families, the advancement of women, the defense of indigenous peoples and protection of migrants and refugees.

Archbishop Auza was ordained a priest of Diocese of Talibon, Philippines, in 1985. He was educated by Spanish Dominican Friars in Manila and Rome, and has traveled extensively throughout Spain. He entered the Vatican diplomatic corps in 1990 and served in Madagascar, Bulgaria and Albania, then worked at the Vatican Secretariat of State.

After the Haitian earthquake, with three key Port-au-Prince archdiocesan leaders dead and scores of other religious killed or missing, Archbishop Auza took a leading role in stabilizing and helping rebuild the church. As nuncio, he was also the key player in channeling relief money from the Vatican and other church sources to local needs and in helping make key decisions on project priorities and spending funds transparently by setting up an independent “inspection” commission.

He helped local projects raise funds and focused efforts on encouraging new and capable church leaders, as well as on building a better and more adequate infrastructure for the church with seminaries, schools, parishes and housing.