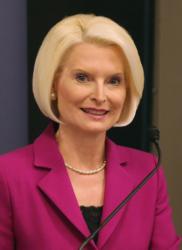 Callista Gingrich, U.S. ambassador to the Vatican, is pictured in a July 24, 2018, photo. (CNS photo/Bob Roller)

VATICAN CITY (CNS) — Even if Pope Francis and U.S. President Donald Trump have strong differences on the issue of migration, there are many other areas of common agreement where their joint efforts promote peace and human dignity, said the U.S. ambassador to the Vatican.

Defending religious freedom, fighting human trafficking and responding to natural and human-made disasters are some of the areas where the partnership benefits humanity, said Callista Gingrich, the ambassador.

As she and her staff were preparing a major Vatican symposium on government cooperation with faith-based organizations for Oct. 2, Gingrich answered questions in a written interview with Catholic News Service. However, she declined to respond to questions about differences between the administration and the Vatican on immigration and on the detainment of asylum-seekers, including children.

“No two governments can agree on everything, but thankfully, we are aligned on a number of our most pressing issues,” she said.

The Vatican symposium, Gingrich said, is a sign that faith communities and faith-based organizations “are critical partners on a number of our shared priorities, like advancing religious freedom, combating human trafficking and delivering humanitarian assistance.”

Global issues like religious intolerance, trafficking and disasters, she said, “are drivers of instability, conflict, poverty and famine in some cases.”

“Instability around the world affects the national security of the United States,” she said. So working with faith-based organizations to address those issues is part of the effort “to provide peace and security at home and strengthen it around the world.”

The symposium will “emphasize the fact that faith-based organizations can help governments and others make a real and lasting impact in communities around the world where they (governments) may not have the infrastructure, experience, or community contacts to do so,” Gingrich said.

“Governments can only do so much alone,” she said. “The United States is the world’s most generous provider of humanitarian aid, but delivering that aid successfully and efficiently requires partnerships with organizations on the ground. Catholic agencies and faith-based organizations more broadly can help us make an impact in places where governments have neither the infrastructure, experience, nor community contacts to do so.”

Pompeo’s Vatican visit, which is expected to include a private meeting with Pope Francis, demonstrates how the secretary, “like President Trump, is deeply mindful of the role the Vatican plays in addressing global challenges,” she said.

The visit also is another sign of the administration’s emphasis on the need to advance and defend religious freedom, she said. “There’s never been a more important time to protect religious freedom. A shocking 83% of the world’s population lives in nations where religious freedom is either threatened or denied entirely.”

Gingrich said defending religious freedom is part of “ensuring a more peaceful, prosperous and secure world” and is “a bulwark against the forces of extremism.”

Although the United States and the Vatican have had formal diplomatic relations only for 35 years, Gingrich called the relationship “one of our most important diplomatic partnerships today and one of the most consequential in our nation’s history.”

“One of my favorite quotes from President Reagan is something he said after he and St. John Paul II formalized our relationship. He said that this relationship ‘would exist to the benefit of peace-loving people, everywhere.'”

For the ambassador, the U.S.-Vatican ties are “unique as far as diplomatic relationships go. The Catholic Church is a global organization, and as such our embassy is a global engagement post.”

PREVIOUS: Guatemalan prelate says his remarks are based on what he experiences

NEXT: Pope names Archbishop Auza, Vatican rep at U.N., as nuncio to Spain