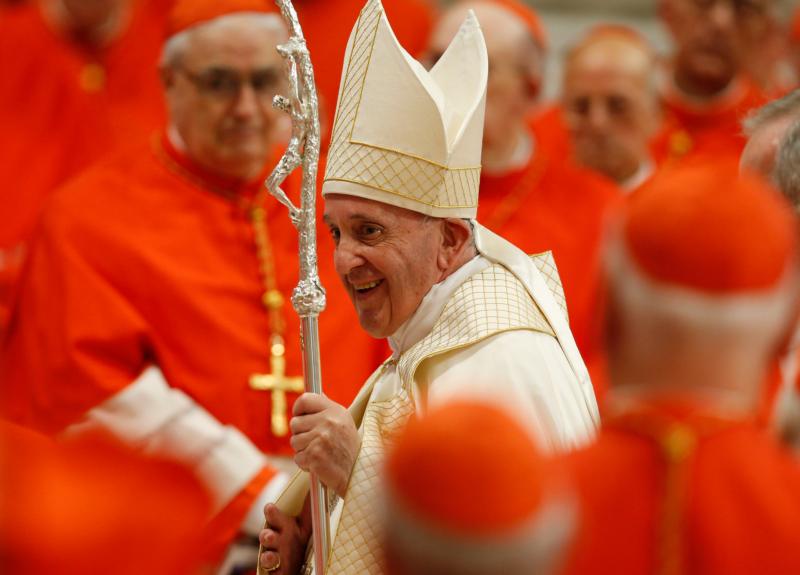 Pope Francis leaves in procession after a consistory for the creation of 13 new cardinals in St. Peter’s Basilica at the Vatican Oct. 5, 2019. Among the new cardinals was Canadian Cardinal Michael Czerny, undersecretary of the Migrants and Refugee Section of the Vatican Dicastery for Promoting Integral Human Development. (CNS photo/Paul Haring)

VATICAN CITY (CNS) — In a ceremony to create 13 new cardinals, Pope Francis reminded new and old members of the College of Cardinals how much their ministry and service depends on their realizing how much God loves them and has been compassionate with them.

“Unless I feel that I am the object of God’s compassion, I cannot understand his love,” he said Oct. 5 during the consistory, a prayer service during which he personally welcomed 13 churchmen from 13 countries into the College of Cardinals.

A person either feels God’s love or doesn’t, he said, and “If I don’t feel it, how can I share it, bear witness to it, bestow it on others?”

“Am I compassionate toward this or that brother or sister, that bishop, that priest? Or do I constantly tear them down by my attitude of condemnation, of indifference?” he asked, adding that it is a measure of one’s loyalty in ministry.

“So many disloyal actions on the part of ecclesiastics are born of the lack of a sense of having been shown compassion, and by the habit of averting one’s gaze, the habit of indifference.”

Pope Francis’ meditation at the ceremony focused on the many ways God has shown his love and concern for his children.

In fact, he said, “the Lord’s compassion is not an occasional, sporadic emotion, but is steadfast and indeed seems to be the attitude of his heart, in which God’s mercy is made incarnate.”

Jesus is the compassionate redeemer of humanity, the pope said. “He incarnates God’s will to purify men and women afflicted by the scourge of sin; he is ‘the outstretched hand of God,’ who touches our sickly flesh and accomplishes this work by bridging the chasm of separation.”

While God is “drenched with compassion,” Pope Francis said, many times people — even Jesus’ disciples — appear to lack compassion; they make excuses or feel indifferent.

The position or ministry someone has in the church “is not enough to make us compassionate,” he said. An intense, personal awareness within of having been the object of God’s compassion is needed.

This is why, he said, “I ask this of you, brother cardinals and those about to become cardinals: Do you have a lively awareness of always having been preceded and accompanied by his mercy?”

Without this feeling of his love, it cannot be understood, explained or shared, he said.

“The readiness of a cardinal to shed his own blood –- as signified by the scarlet color of your robes -– is secure if it is rooted in this awareness of having been shown compassion and in the ability to show compassion in turn,” the pope said. “Otherwise, one cannot be loyal.”

The pope asked the new cardinals to pray that the apostle Peter would intercede on their behalf for the grace “to have a compassionate heart, in order to be witnesses of the one who has looked with favor upon us, who chose us, consecrated us and sent us to bring to everyone his Gospel of salvation.”

Choosing prelates from 13 different nations — eight of whom belong to religious orders — the pope had said he wanted to signal “the missionary vocation of the church that continues to proclaim the merciful love of God to all men and women of the earth.” The Oct. 5 ceremony fell during the extraordinary Missionary Month.

Speaking on behalf of the new cardinals, Cardinal Miguel Angel Ayuso Guixot, president of the Pontifical Council for Interreligious Dialogue, told the pope, “It’s a bit a consistory of religious!”

The church is a missionary church that wants to bring God’s mercy and good news everywhere, but especially to those who are suffering because of violence or injustice, Cardinal Ayuso said.

The new cardinals, he said, were praying to have more compassionate hearts, to heal people’s wounds and promote a culture of inclusion and dialogue. Noting the Oct. 4 feast of St. Francis of Assisi, the cardinal said the saint reminded Christians their “only weapon is their humble faith and concrete, compassionate love for all creatures.”

Cardinal Ayuso also promised the pope he would have “our loyal and sincere collaboration” and support “in the mission our Lord has entrusted to you.”

The consistory brought to 225 the total number of cardinals in the world; 128 cardinals are under the age of 80 and eligible to vote in a conclave.

After the new cardinals professed their faith by reciting the Creed and formally swore fidelity and obedience to the pope and his successors, they approached Pope Francis one by one to receive their biretta, their cardinal’s ring and the assignment of a “titular” church in Rome, which makes them part of the Roman clergy.

In addition to the 67-year-old Cardinal Ayuso, a Spanish member of the Comboni Missionaries, the 12 other prelates who received their red hats from the pope were Cardinals:

— Fridolin Ambongo Besungu, archbishop of Kinshasa, Congo, and member of the Capuchins, 59.

— Michael Czerny, undersecretary of the Section for Migrants and Refugees at the Dicastery for Promoting Integral Human Development. Canadian Jesuit, 73.

— Michael Fitzgerald, an English Missionary of Africa, who had served as president of the Pontifical Council for Interreligious Dialogue and later as Vatican nuncio to Egypt, 82.

— Eugenio dal Corso, retired bishop of Benguela, Angola, an Italian member of the congregation of the Poor Servants of Divine Providence, 80.