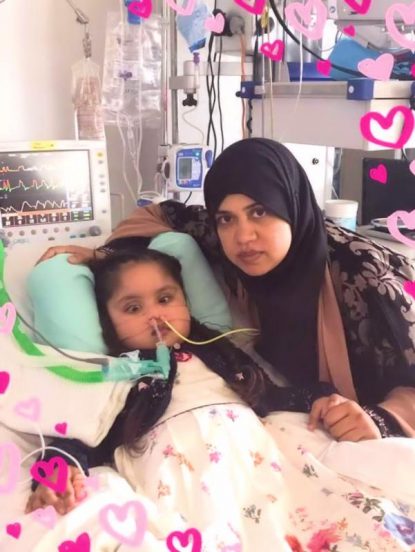 Tafida Raqeeb is pictured with her mother in this undated family photo. The London High Court announced Oct. 3 that she can travel to Italy for brain treatment. She has been in a semi-comatose condition since she suffered severe bleeding on her brain in February. (CNS photo/courtesy Raqeeb Family via Simon Caldwell)

LONDON (CNS) — An English bishop welcomed a court ruling allowing a brain-damaged girl to be treated in Italy against the wishes of U.K. doctors.

Auxiliary Bishop John Sherrington of Westminster said the Oct. 3 judgment of the High Court recognized the desires of the parents of Tafida Raqeeb, a 5-year-old Muslim girl from London, to do all they could to help their daughter “in what are truly tragic circumstances.”

“The heartbreaking illness of Tafida Raqeeb and the distress which the illness of a child causes parents touches the hearts of many people,” said Bishop Sherrington, lead bishop for life issues for the Bishops’ Conference of England and Wales.

Tafida has been in a semi-comatose condition since she suffered severe bleeding on her brain in February.

Doctors at the Royal London Hospital believe nothing more can be done for her and asked the court to rule that it was in her “best interests” that ventilation and other treatment was withdrawn.

Her parents, Shelina Begum and Mohammed Raqeeb, argued, however, that they saw gradual and promising improvements in the child’s condition and believed she should be given more time to recover.

Judge Alisdair MacDonald ordered the hospital to release Tafida so they could take her to the Gaslini Children’s Hospital in Genoa, Italy, which has agreed to treat her. MacDonald found that Tafida had the right to travel to another European Union state and that such treatment was in her best interests.

Outside the court, Begum read a statement in which she emphasized that Tafida was “not dying” but was improving.

“We have always had Tafida’s best interests at heart, and we have never wanted to come to court to have to argue for our rights to seek continued care in a world-class hospital willing to give her the treatment she needs,” she said.

“The entire experience of having to fight for our daughter’s life over the last three months has been exhausting and traumatic for all of her family, and we are glad it is now finally over,” she said.