U.S. bishops speak at synod for the Amazon 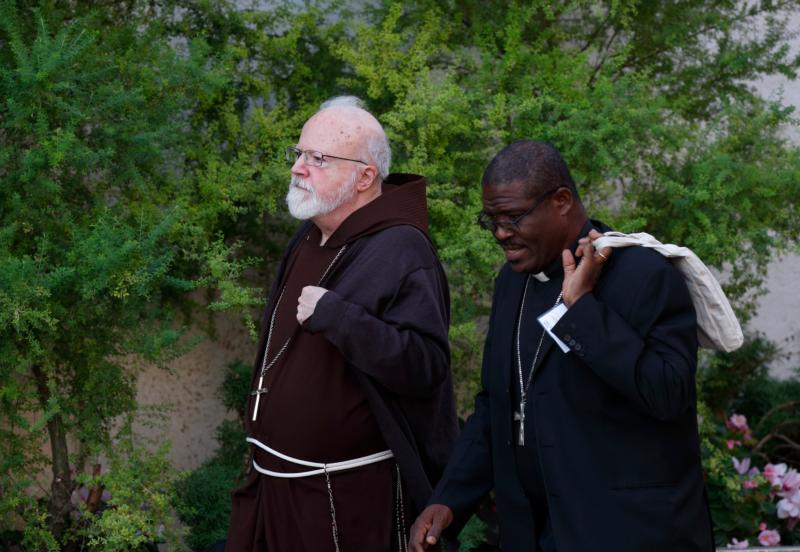 Cardinal Sean P. O’Malley of Boston and an unidentified priest arrive for a session of the Synod of Bishops for the Amazon at the Vatican Oct. 15, 2019. (CNS photo/Paul Haring)

VATICAN CITY (CNS) — The Synod of Bishops for the Amazon is not a “referendum” on priestly celibacy; it is looking for ways to provide for the sacramental life and formation of the people there, U.S. Cardinal Sean P. O’Malley of Boston said.

“Because one of the themes is the terrible shortage of priests in the Amazonia region, I was trying to stress that, if we want to have priests in that area, we are going to have to make sacrifices to have people who can promote vocations and accompany and train seminarians in their own milieu and their own languages,” he said he told synod participants.

The cardinal and Bishop Robert W. McElroy of San Diego both were appointed by Pope Francis to be voting members of the synod, which was being held Oct. 6-27 at the Vatican.

The cardinal, who also is a member of the pope’s Council of Cardinals, gave a summary on CardinalSeansBlog.org of what he told the synod in his talk to the general assembly and issues being brought up by the pope and others.

“One of the things that the Holy Father held up in his comments was that he asked us to look at the problem of violence in the region. Not only the kind of violence symbolized in the pictures of all those who have been killed, but also understanding the violence to the forests themselves and its effects on the people who are there,” he wrote in a post published Oct. 11.

But another topic being widely discussed, the cardinal said, is the lack of priests.

“An indigenous woman from Guyana in our group (for small-group discussions) told us that there are some villages where a priest comes only once a year. She said they have laypeople performing baptisms, presiding at weddings and distributing Communion. In fact, she said she was baptized by a layperson in her village.” 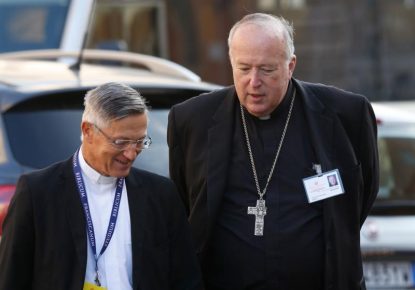 Bishop Robert W. McElroy of San Diego talks with Father Bernardo Estrada as they arrive for a session of the Synod of Bishops for the Amazon at the Vatican Oct. 15, 2019. (CNS photo/Paul Haring)

“Certainly, one of the issues we have to deal with is the scarcity of ordained ministers in the region and the great need to provide for the sacramental life of the people and their formation,” the cardinal wrote. “But despite the impression that is being given in the media, the synod is not some sort of a referendum on priestly celibacy.”

Cardinal O’Malley said he told synod participants that promoting priestly vocations in the Amazon region would require “sacrifices” in the form of people and resources dedicated to accompanying and training seminarians in their context and languages.

He said a special seminary for indigenous students he visited in Verapaz, Guatemala, had to close because it had been “very under-resourced. For example, the seminarians’ families had to bring food for them.”

Despite having a large number of seminarians, the seminary closed, he said.

“I was very sad because the indigenous seminarians I had met at the major seminaries in the capital were like fish out of water. I had seen in the Verapaz seminary an opportunity to train indigenous priests in their own language and in their own cultural context,” he said. “I felt badly when the seminary closed because I knew those seminarians would never be able to attend a different sort of seminary.”

In his talk to the synod, Bishop McElroy underlined some of the gifts the church in the Amazon region is contributing to “the life and dialogue of the universal church,” including the invitation to reevaluate materialist lifestyles.

The “witness to the nature and power of ecological conversion” is one contribution the church in the Amazon is making to the universal church and the world, he said in his intervention Oct. 12, which was published on his diocese’s site, www.sdcatholic.org.

Such a conversion would require recognizing the “empirical reality of the environmental destruction that threatens our planet” as well as accepting creation “as a sacred gift whose future is entrusted to our care,” he said.

The synod working document talks about “the traditional relationship of the indigenous peoples of the region to nature as one of intimacy, sacredness, giftedness and care” as well as the importance of “good living,” the bishop said.

“In my country of the United States, the good life means a life of luxury and ease,” he said. “For the peoples of the Amazon, good living means connectedness to faith, to self, to others, to the land. It points to the unity of all of human existence: work, rest, celebration and relationships, and refuses to accept the fractionalization of human existence that modern life places upon us all. It rejects grave disparities of wealth and social inequality. It breathes with the spirit of God.”

“The specific form of good living that exists for the indigenous peoples of the Amazon will not be transferable to most other cultures in the world,” he added. “But its underlying themes of connectedness, moderation, balance and sharing must become the norm for all peoples in reevaluating our lifestyles if we are to escape the lures of materialism and build a sustainable society for our world.”