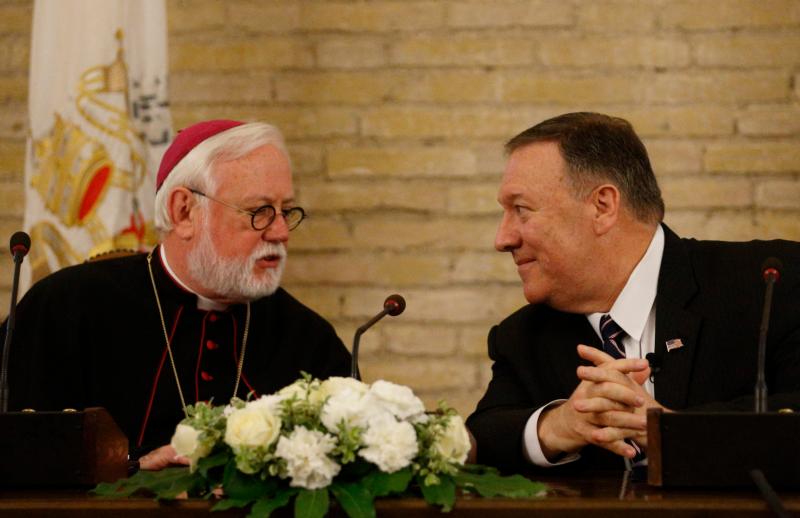 Archbishop Paul Gallagher, Vatican secretary for relations with states, talks with U.S. Secretary of State Mike Pompeo at a symposium sponsored by the U.S. Embassy to the Holy See at the Vatican Oct. 2, 2019. Secretary of State Pompeo spoke at the symposium, which focused on areas of collaboration between the U.S. and the Vatican including the causes of advancing religious freedom and fighting against human trafficking. (CNS photo/Paul Haring)

VATICAN CITY (CNS) — Promoting religious freedom, providing humanitarian assistance and fighting human trafficking are three major issues the Vatican and the U.S. administration agree on and on which they will continue to coordinate efforts, panelists said at a joint symposium.

The Oct. 2 symposium, “Pathways to Achieving Human Dignity: Partnering With Faith-Based Organizations,” was co-sponsored by the Vatican’s Secretariat of State and the U.S. Embassy to the Holy See, which was celebrating the 35th anniversary of the establishment of formal diplomatic relations.

U.S. Secretary of State Mike Pompeo said in his opening remarks how important it was to cooperate.

“Countries of the world can rally together to promote religious freedom and human dignity,” he said, just like St. John Paul II and U.S. President Ronald Reagan did decades ago with their shared concerns about Soviet communism.

“Their words and deeds helped save — helped leave the Soviet leviathan on that ash heap of history,” he said.

Pompeo said “another battle in defense of human dignity and religious freedom” needs to be fought again today.

Saying he believed religious repression and authoritarian regimes went hand-in-hand, “we must exercise our moral voice to confront them.”

“When the state rules absolutely, moral norms are crushed completely,” he said, because “authoritarian regimes and autocrats will never accept a power higher than their own.”

Even though the Vatican and the United States have not agreed on everything, he said, they must agree on the most fundamental issues of human dignity and religious freedom.

Pompeo met with Pope Francis Oct. 3 and the secretary’s spokesperson, Morgan Ortagus, said, “they reaffirmed the United States and Holy See commitment to advancing religious freedom around the world, and in particular, protecting Christian communities in the Middle East.” The secretary and pope also discussed “the continued efforts of the United States and the Holy See to promote democracy and human rights globally.”

Quoting Pope Francis, he said, the aim of U.S.-Vatican collaboration “is to build a society which is truly tolerant and inclusive and to safeguard the dignity and the inalienable rights of every human person.”

The archbishop said, “Indeed, I am of the opinion that the principal emphasis with regard to religious freedom should not be political or ideological: The main concern should be to protect human rights and fundamental freedoms effectively, and to promote peaceful coexistence and inclusive societies, in which people can express their beliefs freely without fear of being censored by the common discourse and where minorities are fully respected.”

He said while the Vatican appreciates ways the church can partner with governments and international organizations in aid distribution and other assistance, he criticized the way “in some cases government funding is conditioned by ideological considerations, not always compatible with religious principles and convictions. It would be invasive for a donor to impose his culture, his values, his ideology and policies, eroding the traditions, history, religious and moral values of people he intends to help.”

While responding to crises is important, he said, the Vatican also believes the root causes of such crises must be urgently addressed, “such as horrific wars, persecutions, human rights violations, political or social instability, extreme poverty, consequences of climate change, and so on.”

This is why, he added, it is important to hear Pope Francis’ call in “Laudato Si'” for an “integral ecology,” which recognizes the link between social justice, the economy, politics, protecting the environment and fighting against poverty.

Cardinal Pietro Parolin, Vatican secretary of state, reminded his audience, which included a number of ambassadors to the Holy See and representatives of faith-based organizations, that the Holy See does not pursue any one national interest.

Its main concern is “the common good,” he said, which depends on concrete commitments to peace, human dignity, religious freedom, social justice and fighting poverty.

In fact, he said, governments should always include sustainable development in their plans because “it would be a humiliation” to keep poorer nations dependent on others.

Freedom of religion and conscience are shared priorities, he said, especially given that there are so many abuses in the world.

While such violations must be condemned, the cardinal said, there also must be a stop to the marketing and flow of weapons, which fuel and worsen so many of these conflicts and human rights abuses.

Governments wishing to make a difference also must not collaborate with those governments or state actors that take part in “reprehensible activities,” he said.

Cardinal Parolin also warned about a form of “bloodless persecution” in some places where there may be no outright violence, but governments chip away at the freedom of conscience, which is the first step toward violations against the freedom to worship.