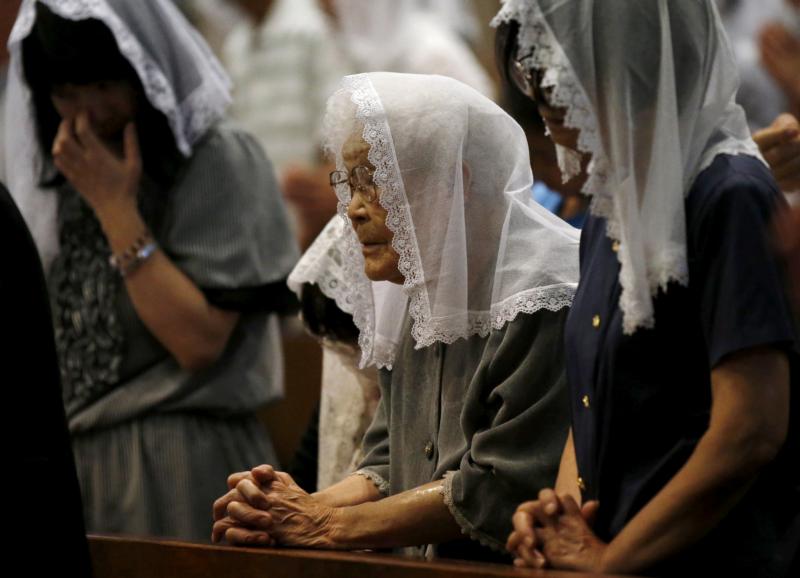 People pray for victims of the 1945 atomic bombing during an Aug. 9, 2015, Mass at the Urakami Cathedral in Nagasaki, Japan. Pope Francis will finally fulfill his desire to be a missionary to Japan when he visits the country, as well as Thailand, Nov. 20-26, 2019, the Vatican announced Sept. 13. (CNS photo/Toru Hanai, Reuters)

The pope’s visit to the Asian countries will begin Nov. 20 in Bangkok, where the local Catholic community is marking the 350th anniversary of the establishment of the “Apostolic Vicariate of Siam Mission.”

In Japan, the pope will visit peace memorials at Hiroshima and Nagasaki, where the U.S. military dropped atomic bombs in early August 1945. But Pope Francis also will spend time with survivors of Japan’s March 11, 2011, “triple disaster” when a strong earthquake set off a devastating tsunami that flooded a nuclear power plant and led to its meltdown.

Here is the preliminary schedule released by the Vatican Oct. 2; further details will be released closer to the trip. Times listed are local, with Eastern Time in parentheses:

— Welcoming ceremony in the courtyard of Government House.

— Meeting with the prime minister in the Inner Ivory Room of Government House.

— Meeting with government authorities, civic leaders and members of the diplomatic corps in the Inner Santi Maitri Room of Government House. Speech by pope.

— Visit with the Buddhist supreme patriarch of Thailand at the Wat Ratchabophit temple. Greeting by pope.

— Meeting with medical personnel at St. Louis Hospital, followed by private visit with the patients and people with disabilities. Greeting by pope.

— Private visit with King Maha Vajiralongkorn at the royal palace.

— Meeting with the bishops of Thailand and with members of the Federation of Asian Bishops’ Conferences at the Shrine of Blessed Nicholas Bunkerd Kitbamrung. Speech by pope.

— Private meeting with members of the Society of Jesus in a room next to the shrine.

— Meeting with Christian leaders and the leaders of other religions at Chulalongkorn University. Speech by pope.

— Meeting with the bishops of Japan at the apostolic nunciature. Speech by pope.

— Homage to the holy martyrs at the martyrs’ monument on Nishizaka Hill. Greeting by pope.

— Lunch at the archbishop’s residence.

— Mass at the Nagasaki baseball stadium. Homily by pope.

— Meeting for peace at the Hiroshima Peace Memorial. Message by pope.

— Meeting with victims of the 2011 “triple disaster” (earthquake, tsunami and nuclear power plant meltdown) at Bellesalle Hanzomon. Speech by pope.

— Private meeting with Emperor Naruhito at the Imperial Palace.

— Lunch with the papal entourage in the apostolic nunciature.

— Mass in the Tokyo Dome. Homily by pope.

— Meeting with the prime minister at the Kantei.

— Meeting with government authorities, civic leaders and members of the diplomatic corps at the Kantei. Speech by pope.

— Private Mass with members of the Society of Jesus in the Kulturheim Chapel of Sophia University.

— Breakfast at Sophia University, followed by a visit to priests who are elderly or ill.

NEXT: Peru’s church leaders call for end to corruption amid political crisis