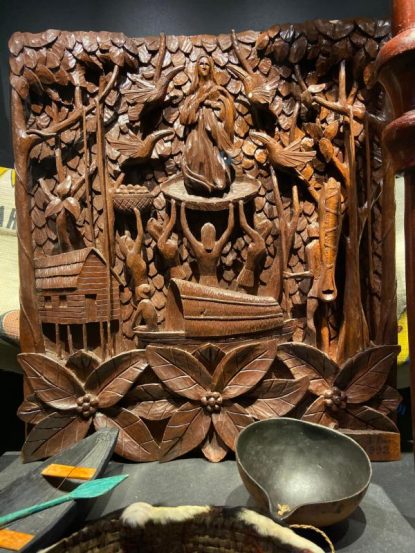 A wood carving of the Assumption of Mary into heaven is seen in a new exhibit, “Mater Amazonia” in the Vatican Musuems. The new exhibit is dedicated to the people, customs and Catholic faith in the Amazon and runs Oct. 28 to Jan. 11. (CNS photo/courtesy Mediacor)

VATICAN CITY (CNS) — With the Synod of Bishops for the Amazon in the final stretch, the Vatican Museums unveiled a new exhibit dedicated to the people, customs and Catholic faith in the Amazon.

The exhibit, “Mater Amazonia,” which runs Oct. 28-Jan. 11, 2020, hopes to give visitors an immersive and moving experience “to understand better the deep breath of the world” that is alive in the vast Amazon region, the museums said in a press release Oct. 25.

Two giant screens project 4K-resolution moving images filmed in the Amazon, showing bright green leaves in the jungles, rushing waters, bickering monkeys and other glimpses of nature splashed across the walls while the noises and voices of life come through in stereo sound.

On display in eco-friendly reconstituted wood panel huts are giant masks and cooking instruments. In a glass case is a hand-carved crosier and liturgical vestments, including a stole made of fabric crafted from beaten tree bark and decorated with natural fibers, feathers and seeds. Another section shows video footage of missionaries ministering in the area 27 years ago and today, and visual testimony of the many missionary men and women — religious and lay — who died serving the people there.

Given the Oct. 6-27 Synod of Bishops for the Amazon being held at the Vatican, Father Stefano Camerlengo, the superior general of the Consolata Missionaries, said he wanted there to be a way to make the Amazon region “more immediate” and visual for people visiting Rome.

With the help of Salesian, Capuchin and Xaverian missionaries, they gathered artifacts from their collections to be displayed at the Vatican Museums for the exhibit, which showcases more than 100 objects.

The objects are not something just to look at, they are to be “contemplated” in a deeper sense by connecting them with their context — the people, places, challenges and treasures in the Amazon, Father Camerlengo said.

It is meant to help visitors “put themselves in the other person’s shoes,” so when “you see a canoe, you don’t go, ‘Oh, how nice,’ and move on,” but instead learn that those canoe journeys can last eight hours with mosquitos swarming the whole time, he said.

“It’s to really know the reality the least among us experience,” and to look outward, learn from others and realize one’s own home or Western civilization is not the center of the world.

“None of us are perfect, no one knows everything, this is the idea” behind the exhibit, Father Camerlengo told Catholic News Service.

Commenting on the Oct. 21 theft of indigenous statues from a side chapel in a Rome church and their being thrown into a river, the priest said, “it is necessary to clearly condemn this act,” which “cannot be tolerated.”

The issue at stake is people “need to have the courage to engage with each other,” he said, “to seek out those who are different, who think differently, but as a way to grow, to think, to advance, not to wage a war that has no benefits, that makes no sense.”

But it is also important, he added, not to fall for “the game of those who perpetrate these acts” by paying too much attention or attributing too much importance to them.

The unveiling of the Amazon exhibit was part of a larger launch of the completely refurbished space for the museums’ ethnological collection, now renamed by Pope Francis, “Anima Mundi,” (soul of the world).

After two years of work, dark corridors and walls were torn down to create a large sweeping area whose glass partitions create a sense of “transparency” and openness, said Father Nicola Mapelli, the curator.

Pope Francis, who officially inaugurated the new museum Oct. 18, wanted everyone to feel at home here, because “the museum must be a home for all cultures of the world, all artistic expressions,” said the priest, who is a member of the Pontifical Institute for Foreign Missions.

“The pope’s idea is that when you come to the Vatican Museums, you find not just (works by) Michelangelo or Raphael and Western art, but you also find the art of the indigenous peoples of the Americas, Africa, Oceania and Australia.”

For now, only the Oceania and Australia permanent collections are open to the public as the museums continue renovating the lower level.

The ethnological collection has more than 80,000 artifacts, making it the largest collection in the Vatican Museums.