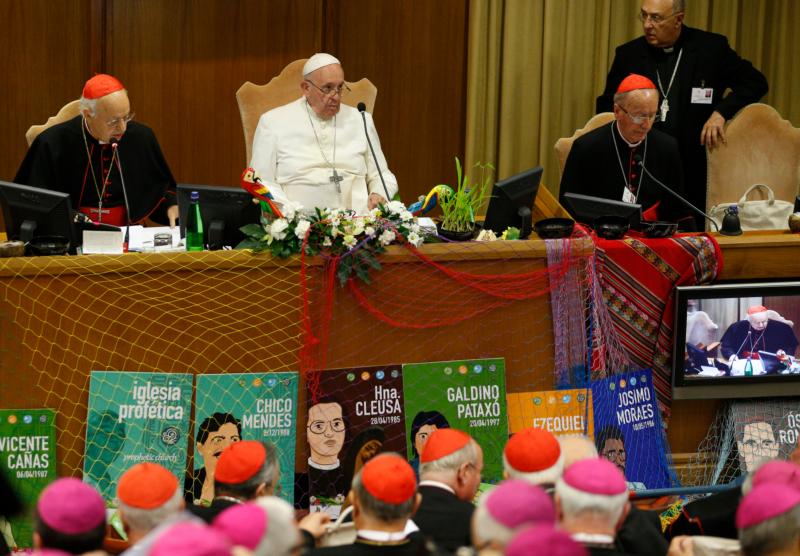 VATICAN CITY (CNS) — To proclaim the Gospel message of hope, the Catholic Church in the Amazon must open new paths of evangelization in the region, including by instituting new ministries for lay men and women, the Synod of Bishops said.

The final document of the Synod of Bishops for the Amazon looked at ways the church can increase its ministry in the region, including by ordaining married men. But at the heart of the document was the need to bring the good news to the Amazon, a mission that includes safeguarding the indigenous people, cultures and land that are under constant threat of annihilation.

“The Amazon rainforest is a ‘biological heart’ for the increasingly threatened earth,” said the final document, released Oct. 26 after synod members voted on it.

The Amazon, members said, is on “a rampant race to death. It is scientifically proven that the disappearance of the Amazon biome will have a catastrophic impact on the planet as a whole!”

The synod brought together 185 voting members — cardinals, bishops, 20 priests and one religious brother — and 80 experts and observers to discuss “new paths for the church and for an integral ecology.”

All 120 paragraphs in the final document garnered the necessary two-thirds approval needed for passage. The Vatican said 181 synod members were present, so each paragraph needed 120 votes to pass.

The focus of the synod’s final document was the call for the church to further its mission in proclaiming the Good News by uniting itself more to the people of the Amazon who, for decades, have suffered the consequences of humankind’s greed.

At the synod, “We discovered that the mighty waters of the Spirit, similar to those of the Amazon River, which periodically overflow, lead us to this overflowing life that God offers us to share in the announcement” of the Gospel,” the document said.

The document underscores the crucial role of Amazonian ecosystems in regulating the global climate and as an important source of fresh water that “connects ecosystems, cultures and the development of the territory.”

The Amazon faces environmental threats that make it “a wounded and deformed beauty, a place of suffering and violence,” the bishops wrote. Violence against nature, in the form of rampant extraction of resources, unsustainable development and climate change, also have “serious social consequences.”

To bring greater awareness and responsibility to the universal church, the synod document proposed a definition of ecological sin as an act of commission or omission against God, against one’s neighbor, the community and the environment.”

The document also proposed the creation of “special ministries for the care of our ‘common home'” that would promote ways of caring for the environment “at the parish level.”

The synod called on all Christians to show their awareness of the value of God’s creation by countering the current “culture of excessive consumption” through recycling, reducing their use of fossil fuels and plastic, as well as by reducing their consumption of meat and fish.

In proposing new pathways of ecological conversion, synod members stressed the importance of integral ecology, in which safeguarding nature and ensuring justice for “the most impoverished and disadvantaged on earth” are “intrinsically united.”

“The future of the Amazon is in the hands of us all, but it depends mainly on our immediately abandoning the current model that is destroying the forest, not bringing well-being and endangering this immense natural treasure and its guardians,” the document said.

The discussions that took place in the synod, the document said, also offered bishops an opportunity to reflect “on how to structure the local churches” in order to address the needs of a “church with an Amazonian face.”

Among those ways are new ministries and roles for the laity, including “in consultation or decision-making in the life and mission of the church.”

To increase the church’s presence in areas that lack priests, the document proposed that bishops entrust “the exercise of the pastoral care of the communities to a person not invested” with the priesthood for “a specific period of time.”

However, “the priest, with the power and faculty of the parish priest, is always responsible for the community,” the document said.

Synod members asked for further discussion on the idea of women deacons, but approved several paragraphs in the document insisting that their role in leading Catholic communities be recognized and that “the voice of women can be heard, they are consulted and participate in decision-making” in the church.

The final document also emphasized the importance of the Eucharist as “the source and summit of all Christian life.” However, it acknowledged that a lack of priests means Catholics in the Amazon have only sporadic access to the Eucharist, reconciliation and anointing of the sick.

While highlighting the gift of celibacy in the Catholic Church and the need for celibate priests in the region, the document proposed the ordination of “suitable and esteemed men of the community, who have had a fruitful permanent diaconate and receive an adequate formation for the priesthood, having a legitimately constituted and stable family.”

Although the paragraph regarding the proposal for ordaining married was approved, it received the least amount of support among those who voted, with 128 in favor and 41 opposed.

The final document also spoke of the “elaboration of an Amazonian rite,” as several synod members had proposed. The bishops voted to ask for a special post-synodal commission of bishops to be tasked with studying the idea.

Citing the Second Vatican Council’s Dogmatic Constitution on the Church document, “Lumen Gentium,” the final document said that the proposed rite would express “the liturgical, theological, disciplinary and spiritual patrimony of the Amazon” in a way similar to the Eastern Catholic churches.

However, in his address following the vote on the final document Oct. 26, the pope reminded synod members that the creation of an Amazonian rite “is within the competence of the Congregation for Divine Worship and can be done according to the appropriate criteria.”

After the votes were cast, Pope Francis told synod participants that he hoped to publish a post-synodal exhortation “before the end of the year so that not too much time has passed.”

“A word from the pope about what he has lived in the synod may do some good,” the pope said. “It all depends on how much time I have to think.”

Contributing to this story were Barbara J. Fraser and Cindy Wooden at the Vatican.

NEXT: Synod calls for more church roles for women, but stops short of diaconate