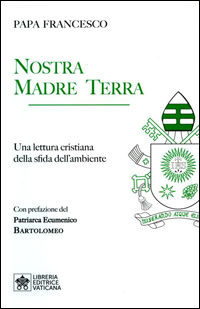 This is the cover of the Italian edition of “Our Mother Earth: A Christian Reading of the Environmental Challenge,” by Pope Francis. The new book compiles passages from the pope’s documents, texts, homilies and speeches focusing on the environment. (CNS photo/Libreria Editrice Vaticana)

VATICAN CITY (CNS) — The global ecological crisis is just one of the effects of a distorted and diseased view people have of the world, themselves and each other, Pope Francis said in a new book.

In fact, addressing a global crisis demands a global approach, which must start with “a spiritual rebirth,” he wrote in the concluding chapter of “Our Mother Earth: A Christian Reading of the Environmental Challenge.”

“We need to rediscover ourselves as people, that is men and women who recognize they are unable to know who they are without others, and who feel called to see the whole world around them, not as an end in itself, but as a sacrament of communion,” he wrote in the book’s final chapter, “A Great Hope.”

Except for the final chapter, the new book is a compilation of passages from Pope Francis’ documents, texts, homilies and speeches focusing on the environment. The book was released in Italian Oct. 24 by the Vatican publishing house.

The publication coincided with the final week of the Synod of Bishops for the Amazon.

Throughout the book, the selected passages reiterate the importance of having a holistic approach to seeing all of creation as a gift from God and the need to experience an “ecological conversion” in which that awareness is translated into action.

The book underlines that the pope’s appeal to care for creation is an appeal to care about life — for all people, including the unborn, and the creatures, land and resources that human life depends on.

In the concluding chapter, Pope Francis deepens the spiritual aspect of ecology and how a Christian vision can and must help the world “turn course” before it’s too late.

“In our current situation, a just and wise attitude, rather than accusations or judgments, is first of all one of awareness,” he wrote.

People need to become aware that the world is a gift from God given out of his immense love for humanity, he wrote. Without this understanding of divine gift, one is part of a “chain that trivializes or disfigures the gift of creation.”

“Precisely because everything is connected in goodness, in love, that is why each lack of love has repercussions on everything,” he wrote.

The ecological crisis, in fact, is just one “of the effects of this sick view of ourselves, of others, of the world, of time that passes — a sick view that does not let us perceive everything as a gift offered so that we can discover we are loved,” he wrote.

One of the biggest risks today, he wrote, is to think the serious threats against life can be solved with purely “environmental” or technological solutions.

What is needed is a “spiritual rebirth” that turns today’s problems into “an opportunity to ask ourselves deep questions about the mystery of being created” and about what is really worth living for.

Such reflection, he wrote, would lead to “a profound revision of our cultural and economic models” from ones founded on control and possession, power and success, to ones that promote growth in justice and solidarity.

This spiritual conversion should lead to sincere repentance from everyone for having been duped by “mindsets that divide, starve, isolate and condemn,” Pope Francis wrote. “It would be wonderful if we could become capable of asking the poor and the excluded for forgiveness, then we would be able to sincerely repent also for the harm done to the earth, the ocean, the air, animals.”

Pope Francis stressed his belief that a new way is possible, but only if it is built on human relationships because “men and women today are so thirsty for authenticity, to honestly see once again the criteria of life, to aim once more for that which matters, rebuilding life and culture.”

The celebration of the Eucharist, he said, teaches such a vision of recognizing and thanking God for his gifts and how “to touch the world with love.”

With the power of the Holy Spirit, bread and wine — the fruits of the earth and human labor — “become Christ, the gift par excellence of the Father, our true brother” in whom people discover they are brothers and sisters.

“Gift, repentance, offering, fraternity. These four words speak of a view of reality, of creation, but they also indicate a journey of healing from the need to possess, the need for power, to abuse, toward (a world of) sharing, collaboration and respect.”

“That is my great hope for our time,” he wrote.

Ecumenical Patriarch Bartholomew of Constantinople wrote the book’s preface, outlining the many joint initiatives between the Orthodox Church and the Catholic Church for safeguarding the environment.

NEXT: Big push made for Mexican premiere of ‘Unplanned’ movie