Big push made for Mexican premiere of ‘Unplanned’ movie 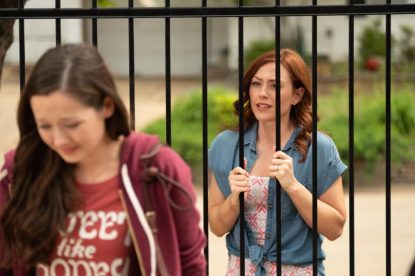 Ashley Bratcher, right, who plays Abby Johnson, is pictured in a scene from the film “Unplanned,” the story of Abby Johnson, a former Planned Parenthood clinic director, and her decision to join the pro-life movement. (CNS photo/Unplanned.com)

WASHINGTON (CNS) — For U.S. elections, candidates and political parties may develop something they call a “50-state strategy.”

But for the Oct. 25 premiere in Mexico of the Spanish-language version of “Unplanned,” actor Eduardo Verastegui, the movie’s executive producer, has employed a 32-state strategy.

So far, Verastegui has visited 16 of Mexico’s 32 states to host screenings prior to the premiere of “Inesperado” (literally, “Unexpected” in Spanish), took a few days off for the nationwide debut, and was gearing up to visit the other 16 states.

Regardless of language, the film tells the story of Abby Johnson, one of the youngest Planned Parenthood clinic directors in the United States, who changed her views once she witnessed an abortion and became an ardent pro-life advocate.

“I met Abby Johnson 10 years ago,” Verastegui told Catholic News Service during an Oct. 21 phone interview from Guadalajara, Mexico, prior to his 14th “Inesperado” screening. After hearing Johnson tell her story, he said, “my admiration for her went to the sky.”

He became attached to “Unplanned” eight months before its March 29 U.S. debut.

His Mexico tour itinerary, Verastegui said, usually includes a news conference in the morning. “Then we go to a school. A full day of activities where we talk about the importance of defending life from conception to natural death,” he said.

The tours also take him to “jails for lawyers to prove their (clients’) innocence. We need to be there as well,” he told CNS. “Pro-life means to protect every life, not just one type of life. Every life matters.”

The reaction so far, Verastegui said, has been “amazing.” He cited turnout of 600 to 800 for the first round of premieres, topping out at 1,000 in San Luis Potosi.

Cardinal Carlos Aguiar Retes of Mexico City consecrated “Inesperado” to Our Lady of Guadalupe at the Basilica of Our Lady of Guadalupe in Mexico City. The film was placed discreetly at the altar during a Mass Sept. 1. Cardinal Aguiar met with Johnson and filmmaker Cary Solomon and his wife, Irene Solomon, and their son, Michael, along with co-director Chuck Konzelman. Verastegui led the event and private meeting.

Solomon and Konzelman, in an Oct. 23 phone interview with CNS, said they are going all-out to distribute dubbed and subtitled versions of “Unplanned” worldwide.

Solomon said “Unplanned” is being dubbed not only into Mexican Spanish to be used throughout Central America as well, but Castilian Spanish for Spain and “neutral” Spanish for South America. The movie is also being dubbed into languages for screening in Singapore, Malaysia, Brazil, Germany, French, Poland, Caribbean dialects, and Quebecois French for Canada.

“We sent the movie to the South Pole. That gives you a sense of our commitment,” Solomon said. “There’s 150 people at the South Pole station, and they got it.”

He added “Unplanned” will be shown in a local language “anywhere where there’s demand. We want to take this film to every country on the face of the earth, including territories and islands. You want the people to experience as best they can the subject matter. In a lot of cases, people are so excited to get this film they were willing to pay for the dubbing or the subtitles. That’s amazing.”

While other of their movies have been translated into other languages, “everything makes it different” for “Unplanned,” Konzelman said. “The other films for the most part were entertainment. This film is about a pressing issue and a controversial issue. It’s been controversial in every country and every continent to varying degrees.”

Solomon pronounced himself and Konzelman “very comfortable” with Verastegui as executive producer. “He’s a holy guy,” he said. “We were looking for people that had tremendous passion. And he’s that person. He loves the movie and he wants to save babies.”

Verastegui has that on his own resume. He said people ask him, “Are you an actor? Are you a producer?” His answer “No, I save babies.” “That’s my end. That’s the main purpose of everything I’m doing.”

He took on that mantle 15 years ago when doing research for the 2006 movie “Bella,” which dealt with a young woman being confronted with the choice to abort her baby or to carry the child to term. Verastegui was in an abortion clinic and met a couple who had an appointment for an abortion, and he told them why he was there. They reconsidered their decision to have an abortion and had the baby instead — naming the boy Eduardo after Verastegui.

“That’s when I started giving my life to the most beautiful job anyone can have — to save life,” he said.