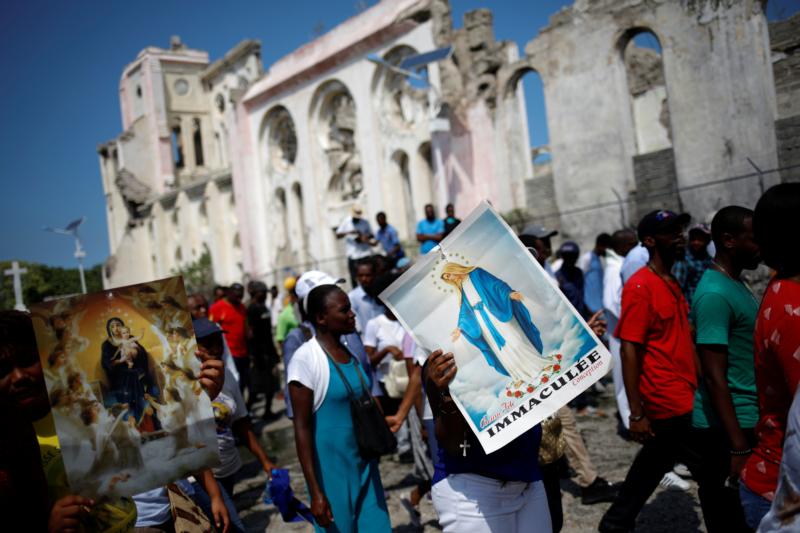 A protester carries a poster with an image of Mary during an Oct. 22, 2019, march organized by religious leaders in Port-au-Prince, Haiti. As Haiti entered a sixth week of violent anti-government protests over corruption and economic woes, Catholic leaders held a rare march calling for sweeping political reform and a resolution to the crisis that has paralyzed the country. (CNS photo/Andres Martinez Casares, Reuters)

MIAMI (CNS) — The political and economic protests roiling Haiti are causing unprecedented lawlessness and impunity, compounding the suffering of Haitians, said the head of an Italian foundation working there.

“I know there are other situations around the world that are difficult and appealing for our attention, but here this is really a potential catastrophic situation,” said Fiammetta Cappellini, a Haiti-based country representative for the Rome-based AVSI, a nonprofit organization created in 1972 and guided by Catholic social teaching.

Cappellini noted that some of the agency’s 17 international staff and 100 Haitian staff in the country participated in an unprecedented but peaceful Catholic-led march through Port-au-Prince Oct. 22. Marchers called for a resolution to the crisis that has paralyzed the country.

Frequent protests in Port-au-Prince, other regional cities and the rural areas have shut down transportation, closed businesses and hospitals and forced children to stay home from school, paralyzing the Caribbean nation of 11 million.

In recent weeks, the U.S. Embassy in Haiti issued a security alert regarding possible protests in Haiti, and the last of U.N. peacekeepers left the country after a 15-year presence.

Protesters, including Catholic leaders, have been calling for an end to corruption and mismanagement and for the removal of Haitian President Jovenel Moise.

“This was a bit unexpected because normally the church tries to be somewhat neutral and not politically engaged, but the population in the country is deeply suffering in this situation,” Cappellini said in an Oct. 24 phone interview with Catholic News Service. “A statement of the bishops here was mainly about doing something for our people and that we cannot accept that they live in this poverty and lack of everything.”

“Too many people die in the country, and God’s righteousness will come true at all costs,” Archbishop Max Mesidor of Port-au-Prince said during a speech at the capital’s cathedral Oct. 22.

Cappellini said one or two of AVSI’s international staff in Haiti are in the process of evacuating but that most of the staffers are operating on a part-time basis, even though daily life in Haiti’s capital is largely in a lockdown, with schools and hospitals closed.

“When someone asks us about this situation they focus on our safety as expat staff, but I would like to stress that this is about the Haitian people, who are already vulnerable and living a life that is not acceptable,” she said.

Cappellini noted that AVSI has managed to keep two strategically located projects open; they are engaging children and adults with new stress-management programs to deal with the ongoing crisis.

“We are finding strategies to get to where we have intervention, living in the communities where we have activities,” she said. “It is a really difficult to ask our staff to work nowadays, but we try to be as flexible as possible, and most of our staff are still coming; I think … they feel that our intervention can really make a difference.”

Haiti’s children, who are staying home out of concern for their safety, are especially vulnerable.

“In the capital, there is almost no school service at this time, but in the rural parts of the country, some schools are trying,” Cappellini said. “It could be really dangerous for children, so we are not asking for our school partners to try to work.”

Cappellini added that the current crisis is a response to political and economic dysfunction, but that criminal mobs are taking advantage of the situation.

“The feeling is that everything is allowed now and armed gangs that historically affect the country are growing,” she said. “This has been the worst economic crisis for the country, and there is a very huge gap in authority — criminality is rising because there is impunity in the county is unprecedented.”

In mid-October, a Catholic Relief Services country representative in Haiti said the current paralysis and unrest there have sent prices skyrocketing and raised the prospect of an imminent humanitarian disaster.

“There is an overwhelming sense of panic that’s growing by the day,” Chris Bessey, CRS’ country representative for Haiti, said in a statement Oct. 17. “Roads are closed. People are trapped in their homes. Children are out of school. We are on the edge of yet another humanitarian disaster if the unrest continues unabated.”

CRS and other nonprofit programming in Haiti have virtually come to a halt, said Bessey, who noted that a widespread fuel shortage has affected most aspects of daily life. Bessey said farmers cannot get their crops to market, and public services have ground to a halt.

“We are feeling the early tremors of what could erupt into catastrophe. Once the full disaster hits, a response will be complicated by lack of security, transportation and other services,” Bessey said.

CRS implements a large U.S. Department of Agriculture program that has helped nearly 35,000 people — including thousands of cacao farmers — recover from Hurricane Matthew in 2016. CRS also has a large education, health and resiliency portfolio. All of these programs have been disrupted by the current unrest.

In Miami, an archdiocesan-sponsored charity, Amor en Accion, which spearheads a 40-year sister relationship between Miami and the Haitian Diocese of Port-de-Paix, has decided to postpone a mission trip it had planned for November.

“It is not just out of caution for ourselves; we don’t want to be a burden on those we serve, because when we fly over there we do drive up to Port-de-Paix and we don’t want them to spend that money on resources,” said Janelle Jay, mission coordinator for Amor en Accion.

Jay said she had been monitoring the situation in Haiti more closely since early October and that her board of directors recommended waiting until next spring for a site visit. The charity supports some 30 Catholic schools with faculty salary support and student nutrition programs.

She said in recent weeks staffers had starting hearing reports from inside Haiti. She said of one priest at the Port-de-Paix cathedral: “I have never heard him sound so preoccupied, but this was (a crisis on) another level, and he said he wasn’t sure what to expect out of the situation.”

“Things in Haiti are generally difficult but this is much worse. We hope that things will get better,” she said.

AVSI’s secretary general in Rome, Giampaolo Silvestri, was likewise hopeful but uncertain of when normalcy will return and tensions ease in Haiti.

“In Haiti the role of the Catholic Church is very important in terms of social activities and services to the population. What is missing in Haiti is the role of the state, because there are no basic services,” Silvestri told CNS by phone.

“It is a very beautiful country, but the situation these days is very terrible. Every year there seems to be a crisis because of hurricanes or political crisis,” he said. “The president doesn’t want to resign and I think that the protests will continue.”

Contributing to this story was Paige Hanley in Rome.

PREVIOUS: Big push made for Mexican premiere of ‘Unplanned’ movie

NEXT: Lebanon’s church leaders to protesters: ‘We hear your cry’