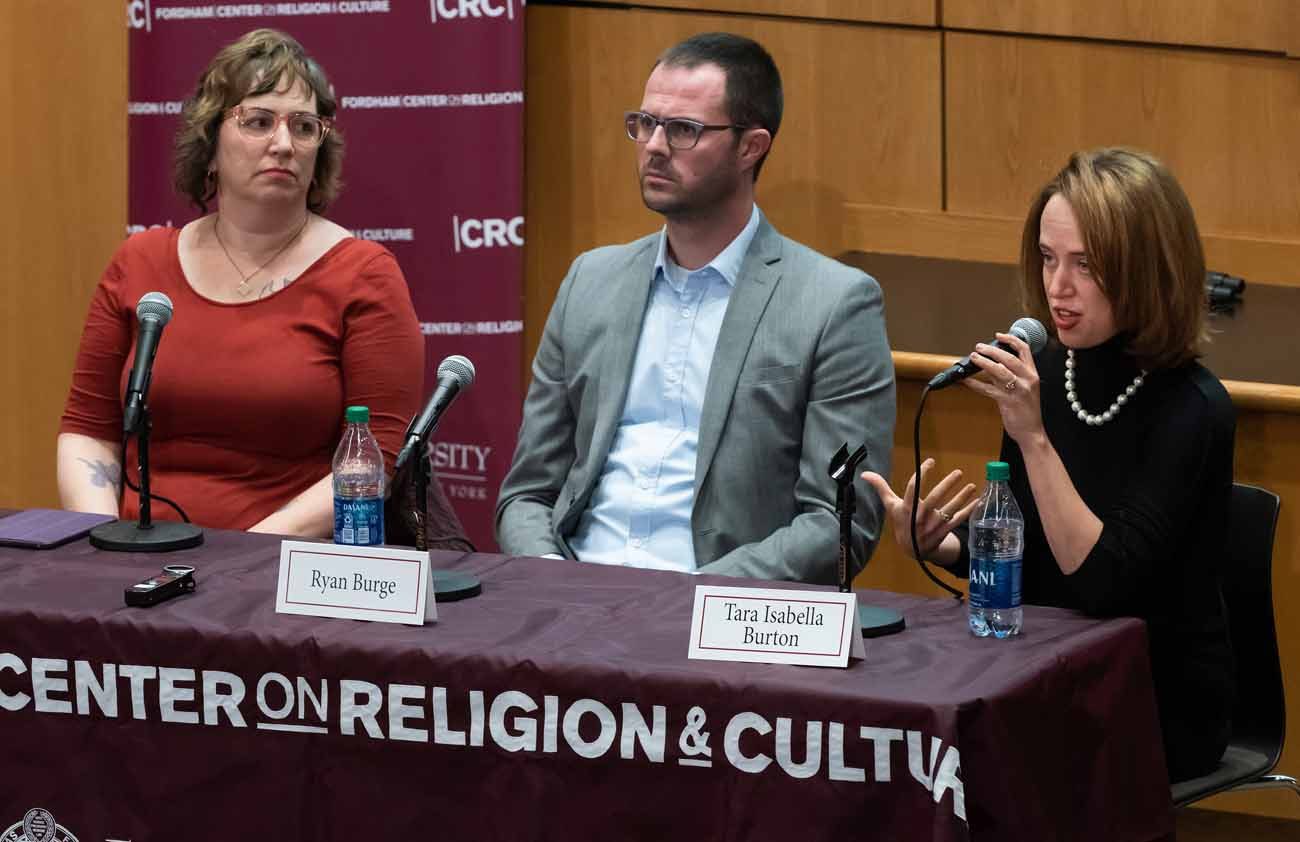 Tara Isabella Burton, a New York-based novelist who writes widely on religion, speaks during a symposium on “God, Religion and the ‘Nones'” Oct. 15, 2019, at Fordham University in New York City. Also pictured are: Kaya Oakes, author of “The Nones Are Alright: A New Generation of Seekers, Believers and Those In Between,” and Ryan Burge, an American Baptist Church pastor and an assistant professor of political science at Eastern Illinois University. (CNS photo/Fordham University)

NEW YORK (CNS) — “None of the above” is the fastest-growing religious identifier in the United States and now approximates the percentage of Catholics in the country.

While most of the religiously unaffiliated people, the so-called “nones” are young, speakers at an Oct. 15 symposium at Jesuit-run Fordham University said the trend encompasses all age groups and has enormous implications for American society.

Between 1972 and 2018, the percentage of nones has grown from 5% to 23%, according to Alan Cooperman, director of religion research at the Pew Research Center. In that same period, Catholics have gone from 27% of the population to 24% and Protestants from 62% to 47%.

Two days after the panel’s presentation, Pew released new data that was embargoed until Oct. 17 showing nones number 26% of the U.S. population, with Catholics now accounting for 20% and Protestant for 43%.

In his remarks, Cooperman said the increase in nones is most pronounced among millennials, those born between 1981 and 1996, which counts 35% as religiously unaffiliated.

In addition to people disaffiliating from the religion in which they were raised, the change in denominational membership is caused by people switching religions.

As a whole, the U.S. public is becoming less religious by conventional measures, Cooperman said. This is quantified when people are asked if they pray daily, consider religion very important, attend religious services at least monthly, believe Scripture is the word of God, believe in God and believe in God with absolute certainty.

Cooperman said the growth in numbers of unaffiliated people is happening throughout the country and among most ethnic groups. He said it may be a “backlash to the entanglement of religion with politics.” It also may be related to a general decline in the institution of marriage or the rise in the number of marriages between religiously affiliated and non-affiliated people, he said.

The decrease in religious affiliation could be a symptom of a broader decline in civic participation and fraternal organizations, Cooperman said. Perhaps people’s lives are “atomized” in the way perfume droplets are distributed in the air by a squeeze bulb sprayer, and they no longer feel connected to a group, he said.

Cooperman also said the growth of the nones might correlate to economic prosperity, where “the richer the country, the less religious it is.”

People who are upset about the trend might consider it a wake-up call for religions to do a better job, Cooperman said.

Kaya Oakes, an Oakland, California, journalist, author and spiritual director, said many nonaffiliated people think religion is too judgmental or has too many rules. She said meeting people where they are and asking what spiritual longings they feel at a time of stress is a good way to reconnect with those who have lost interest in religion.

“Rather than asking how we can lure them back, a better question might be, ‘Where do we meet them and what do they need?'” she said.

Tara Isabella Burton, a New York-based novelist and religion writer, said there is a profound spiritual hunger among young people, in particular. A “huge block” of the nones believe in a higher power and many see themselves as spiritual persons with spiritual hungers,” she said.

Many nones believe their own sense is a better guide to help them be “authentic” than a religious tradition, she said. “The rise of an intuitional and self-focused culture is emblematic of those who feel left behind by social institutions.”

Burton said the nones are not necessarily atheists and agnostics, but tend to “mix and match” from different religious and spiritual traditions to become what she calls “remixed.”

Ryan Burge, a Baptist pastor and assistant professor of political science at Eastern Illinois University, related the increase in religiously unaffiliated to politics. “American Christianity has grown conservative. People think of religion as either the secular left or the religious right. They don’t feel they belong to either, so they don’t show up,” he said. “The pews and the ballot box have a lot in common.”

“Politics has become a religion in many ways and spiritual life has been neglected and consumed by it. The religious lens has been replaced by a political lens and we read scriptures in a political way,” Burge said.

Speakers said the traditional “lifecycle effect,” where people drifted from the religion of their youth and came back when they started families, was last seen among the baby boomer generation and is no longer valid.

Burge said religious groups should spend more time telling the stories of their people who are working to improve the lives of others.

Oakes said the “call to accountability” is important for laypeople. “The prophetic voice of the Catholic Church is often the laity and we don’t have a very loud microphone,” she added.

Burton said churches must strengthen the theological understanding of their members. If people do not understand the teachings and question if they are true, at some point they will ask why the teachings matter.

The event, “Does Faith Have a Future? A Symposium on God Religion, and the ‘Nones,'” was co-sponsored by the Fordham Center on Religion and Culture and Fordham University Campus Ministry.

NEXT: Parish life differs from decades past, but mission endures