WASHINGTON (CNS) — “Nones,” those who profess no religious affiliation, are now the largest subgroup in American society, their numbers having grown in the past decade while the percentage of Catholics in the United States slipped over the past 10 years.

Meanwhile, the Catholic Church can no longer claim a majority of the nation’s Hispanic population. The figure dropped from 57% in 2009 to 47% in 2019, although the latter number still represents a plurality. The percentage of Hispanics who say they are unaffiliated climbed from 15% in 2009 to 23% in 2019, and those who say they are Protestant went up 1 percentage point from 23% to 24%.

Amid a number of setbacks for religionists outlined in the study, it did say 62% of those who profess Christianity say they attend services at the same rate they did in 2009 — at least twice a month. Overall, 65% of respondents described themselves as Christians.

However, the study’s numbers also suggest that the overall number of Christians has dropped in the United States over the past decade, from 178 million in 2009 to about 167 million today, while the number of Americans who are religiously unaffiliated grew by close to 30 million.

The overall “Protestant” designation that accounted for 51% of the population a decade ago has sunk to 43% now; while the number of U.S. Protestants overall outpaces that of Catholics, there is no one Protestant denomination with more adherents than Catholicism.

Even within none-dom, there are different strains.

The most significant rise was among those who espoused “nothing in particular” when it came to religious belief, up from 12% in 2009 to 17% in 2019, a jump of five percentage points. The number of self-described atheists doubled from 10 years ago, from 2% to 4%. Self-described agnostics moved up from 3% in 2009 to 5% today.

Gregory A. Smith, associate director of research for Pew, said the results were distilled from 88 “political” polls conducted by phone over the past decade, with 168,000 Americans over the age of 18 reached. The margin of error for any given year of the past decade, he told Catholic News Services, was 0.7 to 1 percentage points.

Each of those polls asked this question: “What is your present religion, if any? Are you Protestant, Roman Catholic, Mormon, Orthodox such as Greek or Russian Orthodox, Jewish, Muslim, Buddhist, Hindu, atheist, agnostic, something else, or nothing in particular?”

Most, but not all, of the 88 polls also asked: “Aside from weddings and funerals, how often do you attend religious services? More than once a week, once a week, once or twice a month, a few times a year, seldom or never?”

The answer to the latter question also showed a shift over the past decade.

Smith said the political polls ask respondents a lot of demographic details — including the two about religion — so they can identify trends within demographic groups. “Many social scientists have pointed to politics as a factor behind these trends” showing a ongoing disaffection for both politics and religion, he added.

The decline in the number who say they are Christian cut across every major demographic group; the smallest drop cited by Pew was 2% among the “silent generation,” those born between 1928 and 1945. Double-digit drops were recorded among both men (12%) and women (11%); women are less likely than men to describe themselves as nones, 23% vs. 30%, and more likely to go to religious services at least once a month, 50% to 40%.

Other double-digit drops were recorded among whites (12%), blacks (11%) and Hispanics (10%); college graduates (13%) and those with less than a college education (11%); those living in the American Northeast (15%), South (12%) and Midwest (10%); and Democrats or those who lean Democratic (17%). The number of white Democrats who describe themselves as religious fell to under 50% for the first time, while black and Hispanic Democrats who profess religious adherence, though down over the decade, are both still above 70%.

The density of Catholics in the Northeast, long considered a Catholic stronghold, dipped by 9% to 27%, being eclipsed by nones at 28%. The South, once considered a Protestant stronghold, fell 11 points, although, at 53% of the adult population, they still constitute a majority.

Pew said there are as many millennials — those born between 1981 and 1996 — who say they never attend religious services as there are who say they go at least once a week, both at 22 percent.

The full report released Oct. 17 can be found online here. 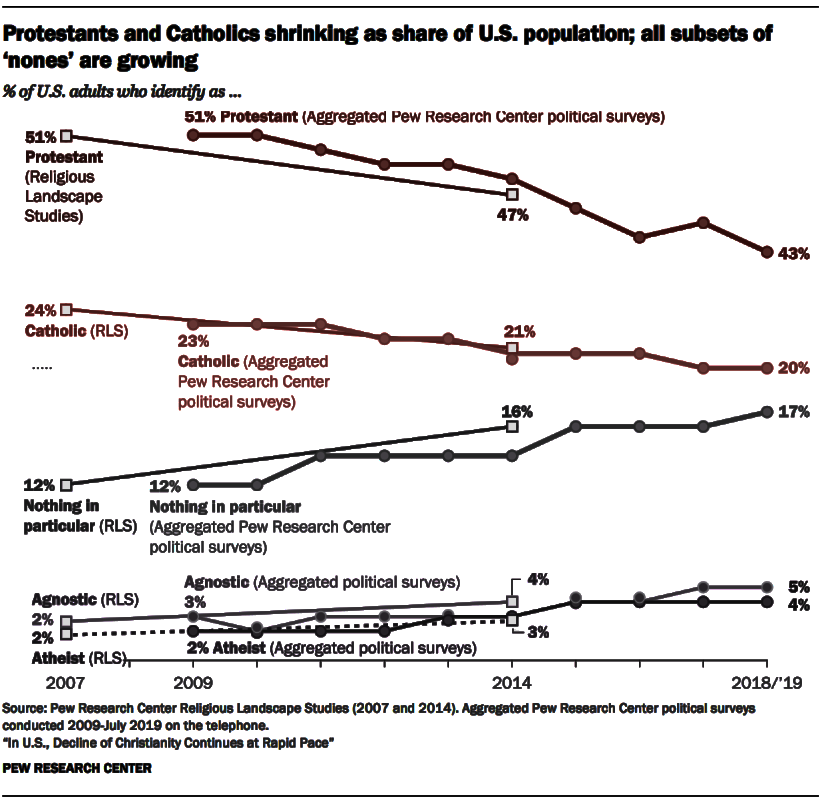 NEXT: ‘No religion’ rising among all ages; ‘enormous implications’ foreseen