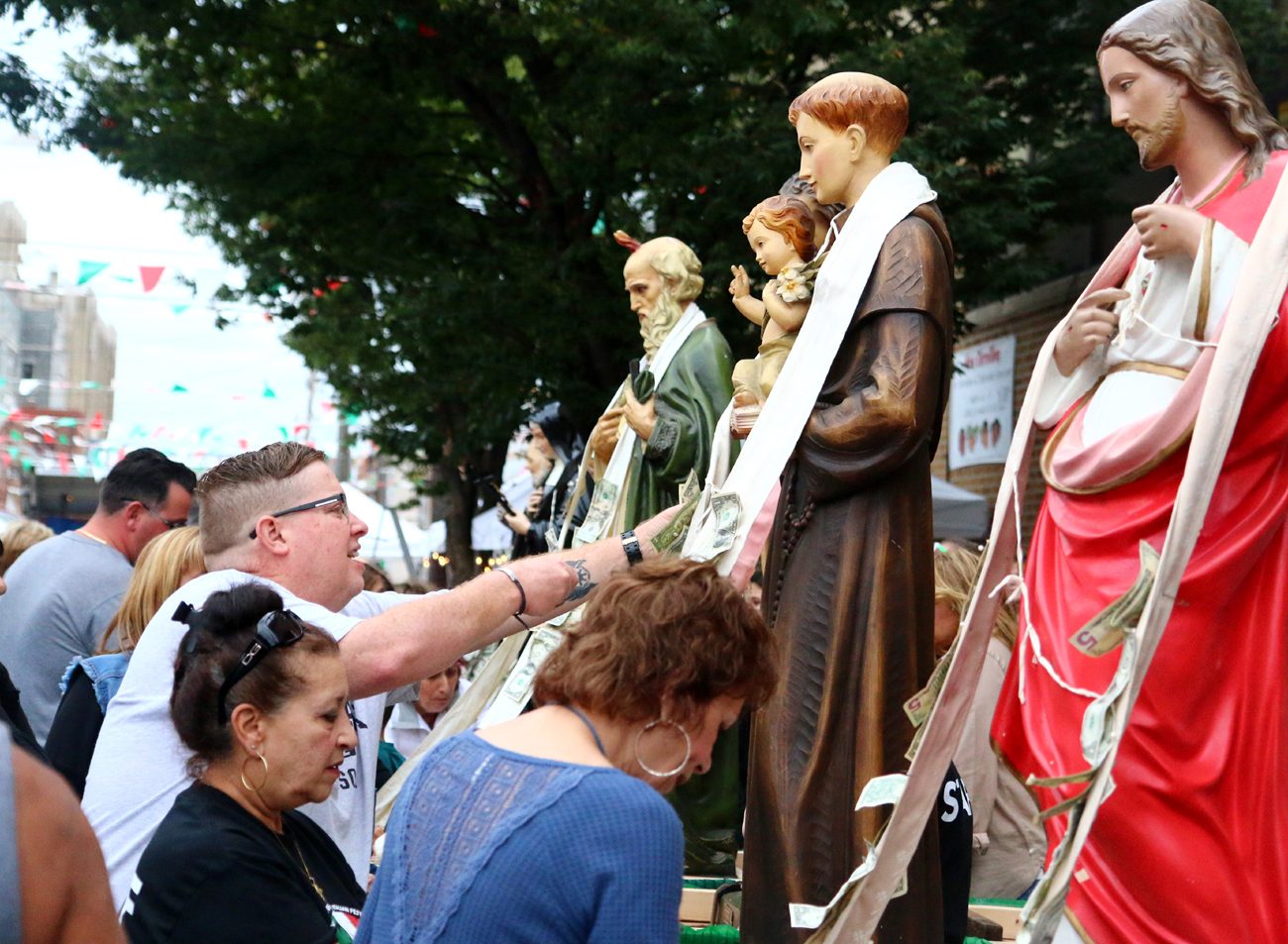 Fewer Catholics may be attending Mass these days due to secularization and clerical scandals, but parish life overall has also changed over the decades in the Philadelphia Archdiocese. The reasons are complex and varied, according to observers in several city and suburban parishes.

The expression of faith by the Catholic community has altered significantly over the past 30 to 40 years, prompting dismay as well as determination to renew pastoral outreach today.

Yet perhaps the biggest challenge is coming to terms with what “parish” and “parish life” actually mean, both on paper and in practice — and what they will signify in the years ahead.

(Read more about how the experience of living the Catholic faith has changed in the Archdiocese of Philadelphia over the decades in CatholicPhilly.com’s series, Our Changing Church.)

What is parish life?

Canon law defines the parish as “a certain community of the Christian faithful stably constituted in a particular church” under a pastor and a diocesan bishop (Canon Law, 515,1).

While the Eucharist is “the center of the parish assembly” (Canon Law 528, 2), spiritual and social activities have historically combined to form a shared experience of Catholic community known as “parish life.”

Anne Marie Gervino, director of adult faith formation at Nativity of Our Lord Parish in Warminster, cited “worship, fellowship and service” as three key elements of the Catholic parish experience.

“I think 90% would say it’s simply coming to church on Sunday, whereas the other 10% would say it’s about everything we do from Sunday to Saturday,” said Father Higgins, noting that a small subset of active Mass-goers are usually involved in a parish’s “various prayer groups, activities and ministries.”

Then and now — and why

Within the last 40 years, two major studies on Catholic parish life in America have been undertaken — one by the University of Notre Dame in 1983, and a second by the Center for Applied Research in the Apostolate (CARA) at Georgetown University in 2011.

Both surveys noted an increased integration of Catholics into mainstream American life, demographic shifts in the distribution of the nation’s Catholic population, expanded lay leadership in parish life due to vocational decline, and varying levels of involvement in parish activities.

In most local parishes, activities such as bingo, altar guilds, CYO sports, communion breakfasts and Christmas bazaars, plus lay associations such as sodalities and rosary societies, were long commonplace. Although they once regularly drew participants to the church campus, such activities (though not obsolete) tend to take place less frequently today, and on a much smaller scale than in the past.

At the same time, Pizza added, the parish still maintains an active Holy Name Society as well as a sodality based at the parish’s mission church, Our Lady of Mount Carmel in Plymouth Meeting.

Echoing the view of many local observers interviewed by CatholicPhilly.com, Pizza attributed declines in parish participation to the secularization of American and Western culture.

“I think people got very lax, and I think television had a lot to do with it,” she said.

“To be honest, I think that years ago God was more central to people’s lives and families than today,” he said, listing “secular society, the entertainment industry and the media” as factors that have made parishes less of a “center of life” for members.

Secularization — which according to some analysts has accelerated since the 1990s — has had a cascading effect on parishes as it has impacted worship, ministries, Catholic school enrollment and even American Catholic identity itself.

In addition, the clergy sexual abuse crisis has eroded trust in both church authority and doctrine.

As a result, Catholic belief is now seen as “just one of many choices” in a “culture that promotes the idea that there are no absolute truths,” said Gervino. 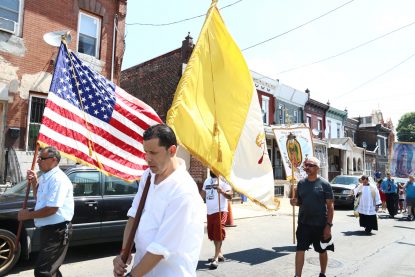 A street procession in honor of Mary winds through the streets of North Philadelphia in June 2018. (Sarah Webb)

Many area faithful pointed to a prevailing consumer mindset, which looks for an array of options and “customer satisfaction” in everyday decisions, ranging from goods and services to religious beliefs and preferred parishes.

“I miss the Eucharist, but I just find the people at my parish so cold and unwelcoming,” said Ted S. of Northeast Philadelphia, a retired veteran and lifelong Catholic who now attends services at several independent evangelical churches.

Local Catholics cited engaging, relevant homilies, skillfully performed liturgical music, youth outreach and opportunities for faith formation and fellowship as key to attracting and retaining parishioners who may find themselves “parish shopping” for what suits them best.

Catholic schools, perhaps not at the center

Education also exemplifies how consumer choice can affect parish life. Catholic schools have long been regarded as vital to parishes, forming future generations of believers while providing a continuous source of family and community activities on the parish campus.

According to archdiocesan statistics, parish school enrollment has broadly declined by 81% since 1960, and enrollment in area Catholic high schools (both archdiocesan and private) has fallen by 80% since that same year.

With a number of available educational options — including public, charter, magnet and private schools, as well as online and homeschooling curricula — parishes can no longer count on a steady stream of students to infuse parish life with vitality.

Parish religious education programs (PREP, formerly known as CCD) have not absorbed the loss of Catholic school students, since PREP enrollment also is down roughly 36% since 1960.

School closures and parish mergers have forced clergy, educators and lay leadership to shift their evangelization and ministry focus.

“If we try to keep the parish school as the center of the parish, we’re kidding ourselves,” said Msgr. Powell.

In fact, some Catholic educators assert that it should properly be the other way around.

“The school is not the central focus of the parish,” said Roselee Maddaloni, principal of Nativity of Our Lord Catholic School in Warminster. “We should have schools that are part of a parish, and the parish gives life to the school.” 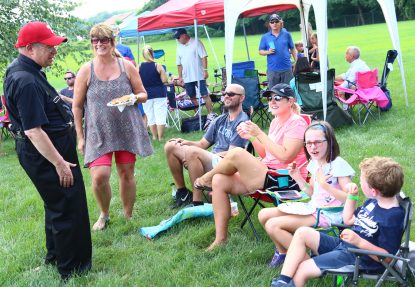 Msgr. Kenneth McAteer, pastor of St. Ephrem Parish in Bensalem, chats with families at the Welcome Back to School Picnic in August 2018. (Sarah Webb)

Several people interviewed by CatholicPhilly.com observed that even well-attended, active parish schools can provide a false sense of security, since families can drift away from parish involvement after children have graduated and received their sacraments.

“Wherever your child is in school, that’s the event you’ll attend,” said Christine Pleis of St. William Parish in Northeast Philadelphia. “Your friends will be there and it’s close to home.”

The demands of weekend work schedules and the need to juggle two or even three jobs also undercuts parish participation, Pleis added.

A wealth of advantages in the suburbs

Wealthier suburban parishes may have some advantage over their urban counterparts in cultivating and sustaining parish life. With greater staff and ministry space, such parishes can often invest in strategies for outreach and communications that encourage consistent participation outside of Sunday Mass.

Yet as with Catholic schools, big buildings and big budgets can mask other threats to parish life.

“The problem with suburban parishes is that often you have a major debt to pay off,” said Msgr. Powell. “You can’t put as much money into your ministries, and you have staff salaries to cover as well.”

More affluent families also tend to be away from the parish for extended periods, dividing their time between shore homes and vacations farther afield, said Msgr. Shields.

Catholics from various ethnic groups throughout the archdiocese — many of them hovering at or under the poverty line — regularly meet in homes for devotions such as the rosary, or organize retreats, pilgrimages and social gatherings off the parish campus.

A view beyond numbers

As they navigate shifts in culture, participation, demographics, finances and even location, area parishes should “be careful not to fall into the numbers,” said Msgr. Shields.

“Christ told us to feed the poor, not count them,” he said.

Whether the turnout is two or 200, many parishes cultivate activities that consistently involve participants in charitable works while offering opportunities for fellowship. St. Ignatius in Yardley, St. Andrew in Newtown, St. Cyril of Jerusalem in Jamison and St. Michael the Archangel in Levittown are among a number of parishes that provide year-round donations and volunteers for Mary’s Cupboard, a Catholic Social Services food pantry located on the campus of St. Michael’s.

For well over a decade, St. Mary Parish in Schwenksville has hosted an annual fish fry during five of the six weeks of Lent, with parish volunteers cooking, serving and sharing meals with one another.

The experience “nourishes people physically, socially and spiritually,” according to Father Louis Bellopede, pastor of St. Mary, and the parish is a natural setting for such meals.

Along with several archdiocesan pastors, Msgr. Shields stressed the importance of hope and humility, which enable the faithful to remain open to the Holy Spirit’s guidance in forming the church.

“The idea of the parish structure is changing, and that’s OK,” he said. “God’s still working. As a priest once told me, some 2,000 years after Christ, the church is still in diapers, and we have a long way to go.” 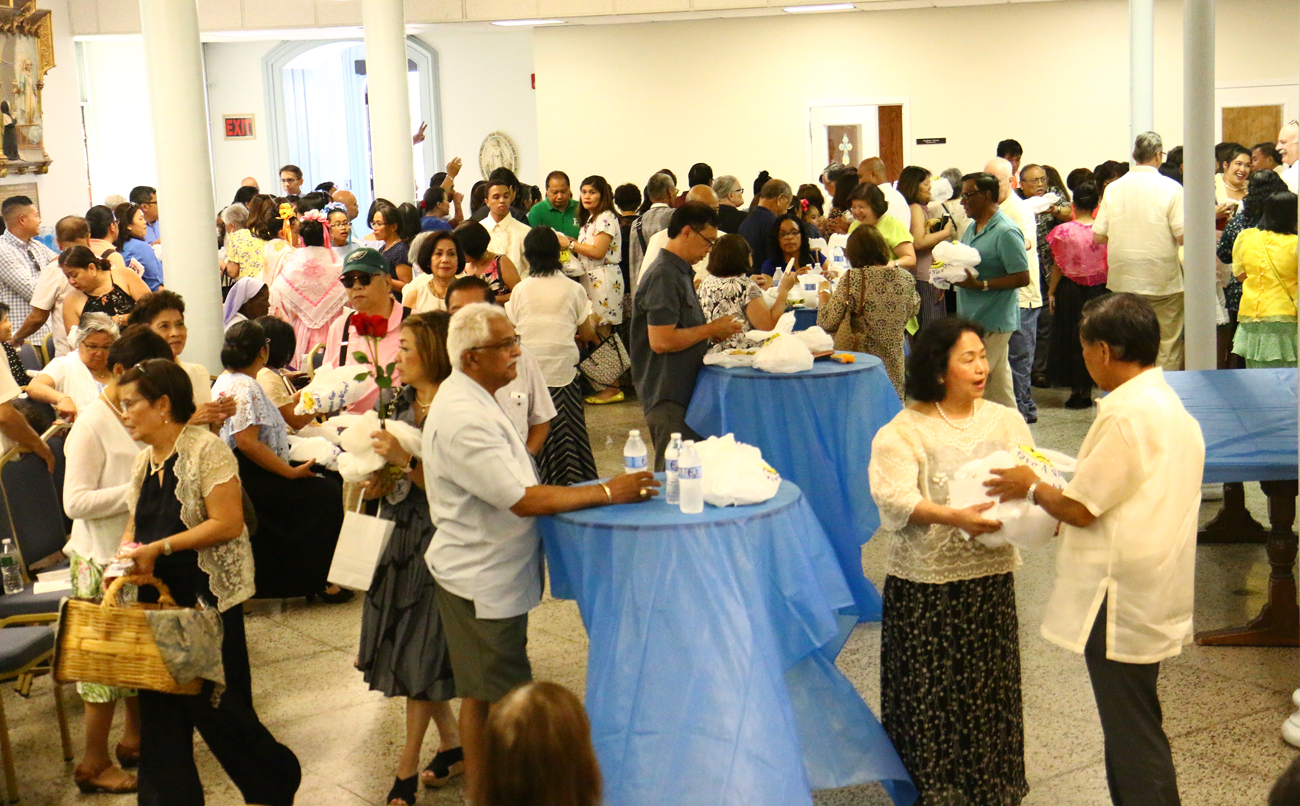 Members of the Filipino Catholic community share a meal and fellowship in July 2019 after the consecration rites of the Our Lady of FIAT Shrine at the Miraculous Medal shrine in Germantown, Philadelphia. (Sarah Webb)

PREVIOUS: ‘No religion’ rising among all ages; ‘enormous implications’ foreseen