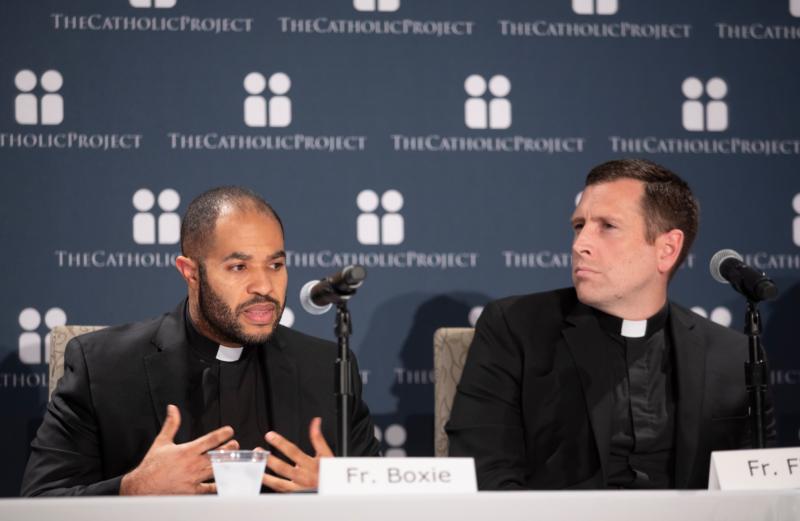 WASHINGTON (CNS) — Four Catholic priests who serve in various ministries and are on the front lines facing the aftershocks of the abuse crisis in the Catholic Church gave their perspective on helping the church address the problem.

They participated in an Oct. 29 panel discussion sponsored by the Catholic Project, an initiative of The Catholic University of America. The event was held at the university’s Heritage Hall.

“These men have felt the same anger and betrayal in recent months as the rest of us, but they have also borne the sins of their brothers,” said Stephen White, executive director of the Catholic Project, who moderated the discussion on “Shepherds to a Wounded Flock: How our Priests See the Crisis.”

“This has been a tough year for all of us,” said Father Boxie. Addressing how he dealt with the crisis, he said, “My ministry from the beginning was always to be a faithful disciple and to be a faithful priest of Jesus Christ … to be this instrument of God’s love, of God’s mercy, of God’s hope and of God’s nearness to the people I serve.”

The priest said that since his ordination in 2016, he has tried to get to know and build relationships with the people entrusted to his care. The parishioners at St. Joseph, he said, are very faithful, but they were hurting as news of the crisis unfolded, and he said his ministry included “really trying to re-establish as best as I possibly can the trust that has been lost among a lot of our people.”

Father Fish described how he had grown up in an environment where he felt blessed to be Catholic and witness the faith-filled lives of many good priests and laity, and a desire to give back helped inspire his own vocation. But he said for him, “this last year has been a revelation of brokenness and disappointment in the church that I had not thought possible before.”

The priest noted the sorrow he felt in learning how clergy sexual abuse had led to people having “not only their innocence, but their faith taken away from them.” Father Fish recounted how he had attended a prep school in Washington state and later learned that a Jesuit priest who had celebrated daily Mass there for students was later accused of being a notorious abuser in Alaska.

Father Fish, who like Father Boxie serves at a predominantly African American parish, said he thinks they have faced the crisis differently, and their faith has given him hope.

“They’ve known a lot of disappointment and brokenness. Seeing the hope that they had in the midst of the struggle that has gone on for much of their lives really taught me something, they taught me how to encounter Christ amidst that struggle and brokenness,” he said.

As a priest, this past year and a half has been “incredibly difficult,” said Father Griffin, who added that as a seminary rector, he knows that the crisis has been especially hard for “young seminarians discerning a vocation to give their life completely to God. … If there’s a crisis of confidence and trust in all of us, it’s sort of redoubled in the life of a young man discerning priesthood.”

But Father Griffin noted that he became a Catholic in college, when peers challenged him about scandals in the church’s history. He said he has taken it as an article of faith — and come to believe it even stronger on a personal level this past year — that the Holy Spirit not only founded the church, but continues to work in it, despite the sins and human weaknesses of its members.

“I believe it with all my heart,” said Father Griffin, who said he has a “deep sense of hope that the Lord is still in charge.”

Later, he noted how after the faithful suffered during the turmoil of the French Revolution in the 18th century, some of the church’s greatest saints arose in France.

The time is now to engage the world with the Gospel and proclaim the risen Christ, the priest said.

“We have to take the opportunity to renew our confidence in who Jesus Christ is and in the church he founded,” said Father Griffin. “Our vocation is to be faithful, to be saints. … We never know what the Holy Spirit has in store, but that means we have to respond and become saints. That’s the answer.”

Father Boxie said the abuse crisis has crystallized for him the importance “of what our mission should be, that is, preaching the Gospel, going out and sharing the rich treasure of our Catholic faith.”

Father Scalia noted that when the clergy abuse crisis surfaced in 2002, he was a young priest. In analyzing the challenge for the church today, he too took an historical and spiritual perspective, noting, “The church is always needing to be purified.”

This time, he said, his brother priests’ response to the crisis seems to be “we have to be better priests,” as they suffer along with their people.

As a vicar for clergy, Father Scalia said that last year when the Pennsylvania grand jury report came out, he had to pore over it to make sure that none of those priests accused of abuse had served in his diocese.

One evening he came home and decided that he needed to walk down the street and pray at a nearby adoration chapel. “That was the first time as a priest I ever hesitated to go out in public with my Roman collar on,” he said.

But on the day after that report was issued, Father Scalia said he gained hope when meeting with a man who was interested in becoming Catholic, who told him that he believed “the Catholic Church is the only body with the institutional integrity to withstand the problems of the modern world.”

And when asked about the abuse crisis, the man responded, “One generation of holy priests will rid us of this.” 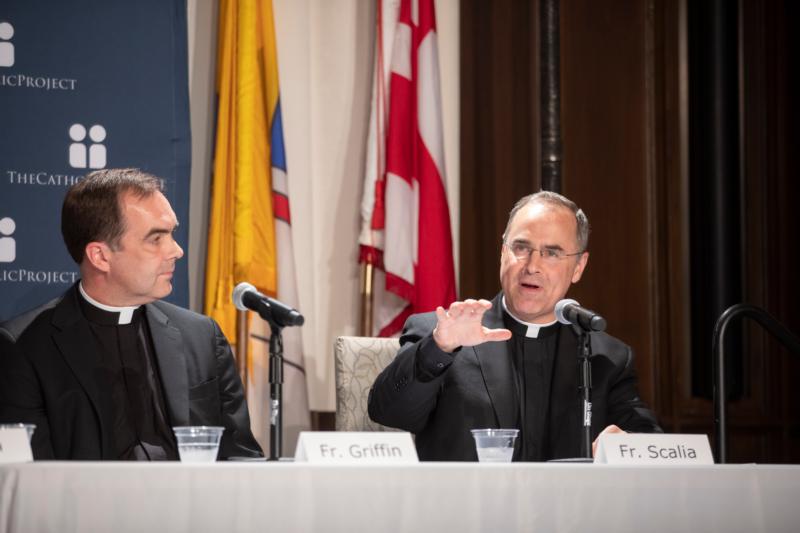 Father Paul Scalia, vicar for clergy for the Diocese of Arlington, Va., gestures during an Oct. 29, 2019, panel discussion on “Shepherds to a Wounded Flock: How our Priests See the Crisis,” at The Catholic University of America in Washington. At left is Father Carter Griffin, rector of the Archdiocese of Washington’s St. John Paul II Seminary. (CNS photo/Andrew Rozario, Catholic Standard)