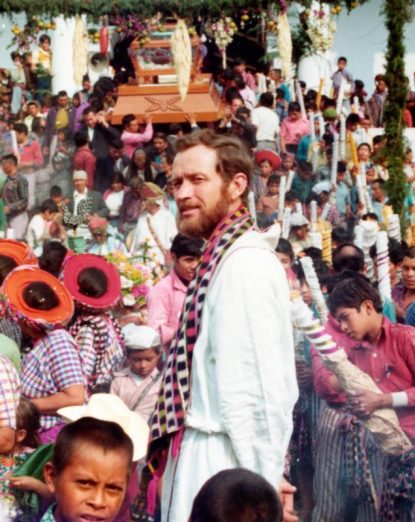 “What we are about to construct here we are building for the honor and glory of God whose goodness, whose holiness, whose faithfulness, whose mercy shown through the life of Father Stanley Rother,” Archbishop Coakley said during his homily.

“It is God who we glorify as God reveals himself in the lives of his holy ones. We do all of this as we do all things for the glory of God and for our Lord and Savior Jesus Christ,” he added.

During the ceremony, Archbishop Coakley blessed the cornerstone of the shrine and the ground where the future main altar will be located. He then processed with the bishops and priests to bless the area where Blessed Rother will be entombed in the chapel.

The $40 million shrine is “the signature element” of the first capital campaign the archdiocese has undertaken, according to an archdiocesan news release. The campaign is called “One Church, Many Disciples.”

Besides a chapel, the site will include a 2,000-seat church, an education building, an event space and several areas designated for shrines and devotion. The site will be developed over time, according to an archdiocesan news release.

Blessed Rother (pronounced ROW-ther) was a priest of the Archdiocese of Oklahoma City and beginning in 1968, he served the faithful at a mission in Santiago Atitlan, Guatemala, sponsored by the archdiocese. While stationed there, he also helped build a small hospital, a school and the area’s first Catholic radio station. He was brutally murdered there in 1981. He was 46.

Archbishop Beltran formally opened the priest’s sainthood cause in 2007. Little Rock’s Bishop Taylor was the first episcopal delegate for the cause; he, like Father Rother, is a native of Oklahoma. In his role as delegate, he conducted many interviews, mostly in Guatemala, for documentation about the slain priest’s life and ministry that was sent to Rome.

In December 2016, Pope Francis recognized Father Rother’s martyrdom, making him the first martyr born in the United States. He was beatified Sept. 23, 2017.

Along with the Spanish colonial-style church — which will be the largest Catholic church in Oklahoma — an additional element will be a museum and pilgrim center, to be built for an additional $5 million. The center will welcome thousands of visitors each year to learn about the life, witness and martyrdom of Blessed Rother.

NEXT: Bishops vote to revise strategic priorities for the early 2020s