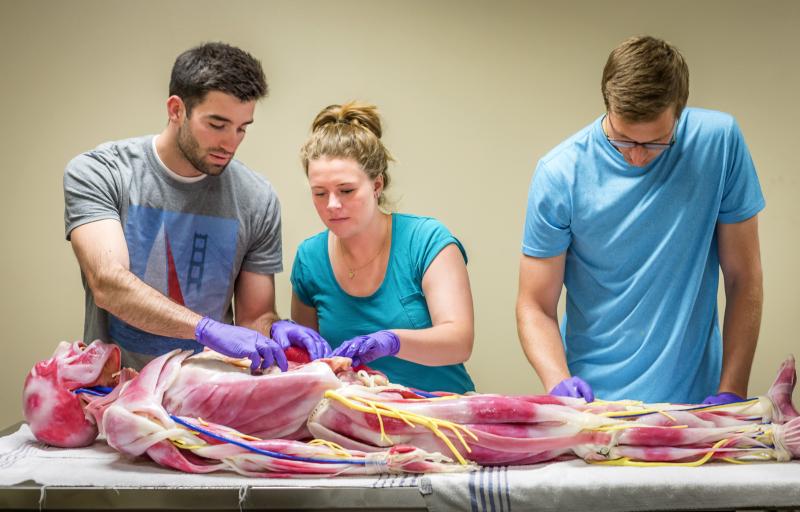 Medical students from the University of Mary in Bismarck, N.D., are pictured in an undated photo. The university announced Nov. 1, 2019, it plans to name its School of Health Sciences after St. Gianna Beretta Molla. (CNS photo/University of Mary)

BISMARCK, N.D. (CNS) — The University of Mary plans to name its School of Health Sciences for a 20th-century Italian saint who saved the life of the child she was carrying despite a cancerous tumor in her uterus.

The Catholic university announced Nov. 1, All Saints’ Day, that it would name the health sciences school in honor of St. Gianna Beretta Molla as it opened a fundraising campaign for the program during its annual Candlelight Gala.

University officials told supporters during the gala that St. Gianna’s family allowed her name to be used for the school.

“The naming of our school after St. Gianna beautifully emulates the sanctity of human life. The importance of the dignity of the human person runs deep within our school and within the hearts of our students,” Glenda Reemts, chair of the university’s department of nursing, said at the event.

St. Gianna was born Oct. 4, 1922, near Milan, Italy, the 10th child of 13 in her family. Following World War II, she became a pediatrician. She was a Catholic leader, being active in Society of St. Vincent de Paul and other Catholic organizations.

As Italy emerged from the war, St. Gianna opened a medical clinic in Mesero, a small town west of Milan. There, she met her husband, engineer Pietro Molla. The couple married in 1955 and had three children within four years. Two subsequent pregnancies ended in miscarriage.

Early in the future saint’s sixth pregnancy, doctors discovered a tumor in her uterus. She permitted surgeons only to remove the tumor rather than undergo a complete hysterectomy, as doctors recommended, to save the life of her child. St. Gianna carried the child to full term, giving birth seven months later in April 1962.

Complications developed following the birth of the child, a daughter who was named Gianna Emanuela Molla, as an infection set in. St. Gianna died a week later at her home in Mesero.

Today, Gianna Emanuela Molla is a physician herself. She attended the announcement ceremony to offer support to the effort.

“The new name calls us to prepare our students to be compassionate, loving and morally courageous healers who will carry on the ministry of healing in the future,” Janeene Sibla, chair of the university’s occupational therapy program, told the university’s supporters.