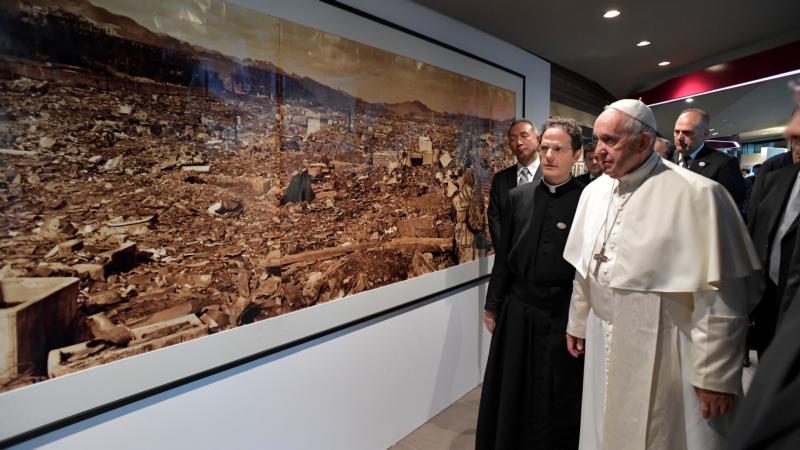 Pope Francis walks by a photo showing the destruction of an atomic bomb during a visit to the Jesuit-run Sophia University in Tokyo Nov. 26, 2019. Bishop David J. Malloy of Rockford, Ill., the new chairman of the U.S. bishops’ Committee on International Justice and Peace, said Nov. 25 the bishops “remain firmly committed to global nuclear disarmament.” (CNS photo/Vatican Media via Reuters)

WASHINGTON (CNS) — The new chairman of the U.S. bishops’ Committee on International Justice and Peace has echoed Pope Francis’ renewed call to global nuclear disarmament that came during his Nov. 23-26 pastoral visit to Japan.

“We declared in 1993: ‘The eventual elimination of nuclear weapons is more than a moral ideal; it should be a policy goal,” he said in a statement.

Earlier that day, Bishop Malloy was named chairman of the committee by Archbishop Jose H. Gomez of Los Angeles, president of the U.S. Conference of Catholic Bishops.

Bishop Malloy was voted chairman-elect of the committee Nov. 12 during the bishops’ fall general assembly in Baltimore. He assumes the seat a year early to fill the vacancy created by the election of Archbishop Timothy P. Broglio of the U.S. Archdiocese for the Military Services, as USCCB secretary.

Archbishop Broglio will complete the term as secretary of Detroit Archbishop Allen H. Vigneron, who was elected vice president of the bishops’ body during the assembly.

Bishop Malloy noted that the U.S. and Russia possess more than 90% of the world’s nuclear weapons. “This fact alone calls for our nation to exercise global leadership for mutual, verifiable nuclear disarmament,” he said.

In giving “a powerful witness to the grave threat posed to human life by nuclear weapons,” Pope Francis’ renewed call reiterated the teaching of his predecessors including St. John Paul II, he said.

The bishop also called upon both nuclear weapons powers to extend the New START agreement, which is set to expire in 2021 unless Russia and the U.S. agree to a five-year extension. New START capped the number of deployed strategic nuclear warheads and bombs by each country at 1,550.

The treaty is the last remaining nuclear weapons pact between the two nations. Both countries have announced their withdrawal from other nuclear disarmament treaties, citing violations of the other parties, or have let agreements expire.

NEXT: Everyday Heroes: Army officer donates part of liver to save priest’s life