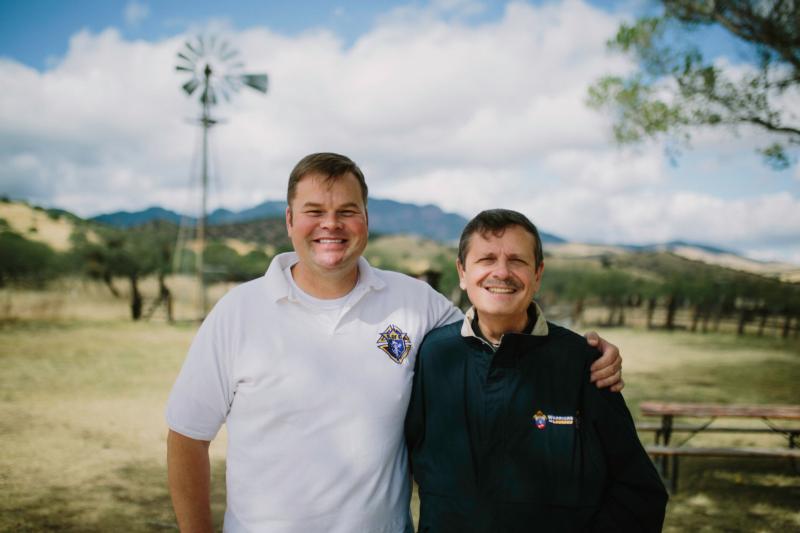 U.S. Army Chief Warrant Officer Chris Moore and Father Dennis Callan, a Divine Word missionary, are seen in this undated photo. Moore donated part of his liver to Father Callan in 2017. They met one another four years earlier at Camp Humphreys military base in South Korea. (CNS photo/courtesy Knights of Columbus)

Father Dennis Callan’s health was rapidly declining. His situation was so dire that his dentist refused to even pull a tooth out of fear that the he would bleed to death.

The cause? Advanced cirrhosis of the liver.

A Divine Word missionary, Father Callan was stationed in South Korea, serving as a military chaplain. He would have to leave Korea to return to the United States for treatment.

When he announced to his parishioners in November 2015 that he had to leave for “personal reasons,” one parishioner took notice: his friend U.S. Army Chief Warrant Officer Chris Moore.

Moore and his wife, Heidi, met Father Callan in 2014 at Camp Humphreys. The Moores and Father Callan would share meals together and socialize after Mass, particularly at Knights of Columbus council meetings — both men were members of Bishop John J. Kaising Council 14223 on the base. Father Callan was a spiritual guide as the Moores welcomed two children into their growing family.

“He was a support during our time in Korea because my wife was new to Catholicism,” said Moore, currently stationed at Fort Knox, Kentucky, while his two children and his wife live in Arizona. “Father Dennis was there to guide us and strengthen us in our relationship and help us to get to where we are today.”

When Father Callan returned to the U.S., his hepatologist in Chicago told him that he was lucky to have survived the trip from South Korea. His only chance of survival was a liver transplant.

Members of family were tested to see if they could donate, but no one was compatible. By the end of December 2016, Father Callan’s health began free-falling.

He began arranging his funeral.

“I decided I did not want to go on this (donor) list,” Father Callan said. “I figured, I’m a priest and I would accept whatever the Lord had in mind for me and I did not want to take the opportunity away from another to receive a liver.”

Throughout the process, Father Callan and the Moores kept in touch. When Father Callan told the Moores that every option seemed exhausted, they offered to be tested to see if one of them was a compatible donor.

Father Callan was completely shocked at the Moores’ offer. Especially because it would not be easy for Chris to donate, due to Army regulations regarding organ donations.

It turned out that navigating these regulations was worth it. Chris was a match.

In May 2017, Moore and Father Callan went in for surgery at Northwestern Memorial Hospital in Chicago.

Father Callan was in surgery for 10 hours and received more than two-and-a-half pounds of his brother Knight’s liver. Moore noticed the immediate health differences in his friend when he visited him the day following the surgery.

“We call each other brothers now because we share something in common, our livers,” Moore said with a smile. “We share a special bond and he’s able to do what he does, continue to be able to do what he wants to do which is minister to people.”

“One of the things that I felt very strongly about is that the brotherhood among the members of the Knights of Columbus is important because men need a lot of support in the faith,” Father Callan said.

Father Callan and the Moores attended the Warriors to Lourdes pilgrimage — an international event co-sponsored by the Knights of Columbus along with the U.S. Archdiocese for the Military Services to bring healing to military personnel and their families at the Marian shrine in France.

When reflecting on this period in his life, Father Callan sees God’s providence.

“What we have to realize is that God is present with us,” Father Callan said. “God is leading us, guiding us through the many, many things, many trials that we face. God is always present, caring and loving for us in ways that we don’t necessarily understand.”

Father Callan remains close with the Moores, visiting them at their home in Arizona.

But when apart, the brother Knights still contact each other to talk.

“For me, simply being with Chris or talking with him inspires me and encourages me,” Father Callan said. “We are brother Knights in every sense of the word.”