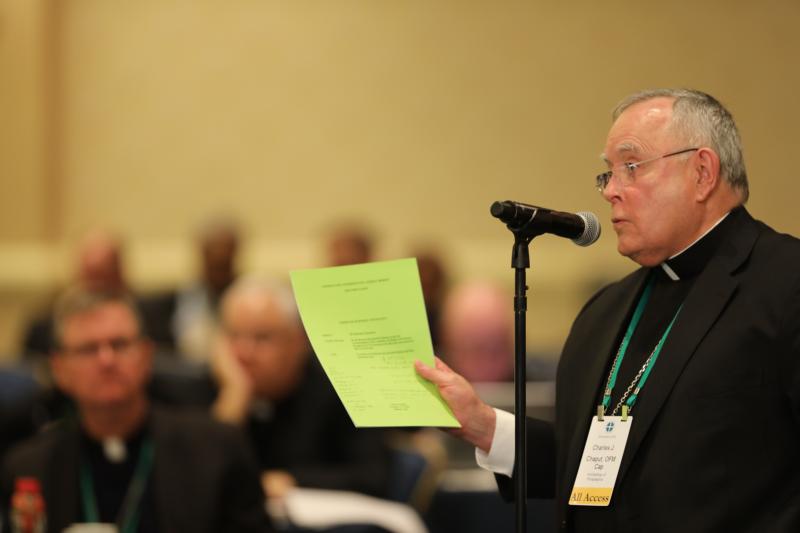 BALTIMORE (CNS) — The U.S. bishops voted to approve the budget for 2020 for their conference headquarters in Washington but did not register sufficient numbers to determine passage of a proposed 3% increase in the diocesan assessment for 2021.

Both votes took place Nov. 11, the first day of their Nov. 11-13 fall general assembly in Baltimore.

The bishops approved a budget nearing $22.69 million for next year. Budget approval required a majority of bishops present and voting. The vote was 211-11, with one abstention.

The proposed 2020 budget projects a “marginal” surplus of $49,261, about 2% of the total, according to Archbishop Dennis M. Schnurr of Cincinnati, treasurer of the U.S. Conference of Catholic Bishops.

The figures include increases of 3.6% for policy and advocacy, 3.5% for the administrative offices, 2.7% for the general secretariat, 1.2% for the USCCB’s staff house in Washington, and 0.4% for pastoral ministries.

The biggest budget decreases come within the Migration and Refugee Services office, which relies on federal grants for much of its revenue. MRS operations “continue to be impacted by the very dynamic changes in the federal immigration and refugee policies and programs,” Archbishop Schnurr said in a message sent to bishops prior to the meeting

MRS administration is being cut $6.6 million “due primarily to the reduction in refugee arrivals which directly impacts pass-through funding to the dioceses for local administration and direct assistance to clients,” Archbishop Schnurr said. MRS’ resettlement services office is being scaled back by $2.6 million “largely due to the closure of the Cuban-Haitian program by the end of 2019,” he added. MRS’ executive office is cutting its budget $178,00 for 2020, and its special programs office will be down $53,000 from 2019 levels.

Overall the numbers of refugees admitted to the country who are helped by MRS “continue to track downward,” Archbishop Schnurr told his fellow bishops.

“Staff remains vigilant and where possible, proactive” in pushing for higher federal intake numbers, he said.

The USCCB’s communications arm is projected to have a 0.1% decrease. “The communications budget represents the single largest budget within unrestricted funds,” Archbishop Schnurr said. “While it continues to have financial challenges,” he added, “a study examining the viability of the communications operations and existing lines of revenue is very near completion.”

Villa Stritch, owned and operated by the USCCB in Rome for visiting bishops, faces a 4.7% decrease.

Two-thirds of diocesan and eparchial bishops are required to vote yes for the assessment for it to pass. The vote was 111-55, with three abstentions. Bishops not at the meeting will be able to vote by email to see whether the two-thirds majority will be reached. There were 28 bishops not in attendance; 132 yes votes would be needed to OK the assessment.

“For the majority (62%) of dioceses, this will mean an average monthly increase of less than $150,” Archbishop Schnurr said.

“The assessment is not meant to fund new initiatives,” he added. “The last time there was a special assessment was for the 2007 budget.”

The USCCB also allows for “crisis response” expenses to be paid out of its general reserve fund. Archbishop Schnurr said those expenses came to about $1.85 million for the 15 months between June 2018 and August 2019.

But Archbishop Charles J. Chaput of Philadelphia spoke against the assessment, saying he gives $257,000 to fund USCCB operations, and another $257,000 to the Vatican in accord to Canon 1271, which deals with diocesan support of the Vatican.

“I don’t have the kind of money” to pay such assessments, Archbishop Chaput said, adding that his archdiocese’s reserves are not as large as those of the USCCB.

Archbishop Schnurr said the interpretation that dioceses must pay an equal amount to the Vatican that they pay in support of their national bishops’ conference is “a misunderstanding.” He added the notion came up during an address to the U.S. bishops in the early 1990s from U.S. Cardinal Edmund Szoka, who at the time was president of the Prefecture for Economic Affairs of the Holy See, the Vatican’s budget management office.

In the cardinal’s remarks, “he said one interpretation of Canon 1271” was to pay equivalent amounts both to the national bishops’ conference and the Vatican. But such a policy “was never voted on,” said Archbishop Schnurr, who was working at USCCB headquarters at the time. “That was only Cardinal Szoka’s suggestion. It never went any further than that.” The amount contributed to the Vatican he added, is “really left up to the individual diocese.”

As to Archbishop Chaput’s point about the USCCB’s reserves, Archbishop Schnurr said the added expenses related to addressing clergy sex abuse — some $2.15 million — were able to paid for out of the reserves, allowing them to be built back up over time. Without it, “there would have been an immediate assessment” request of about 15% percent to pay for them, he added.

NEXT: Rural-urban convenings suggested to address plague of gun violence