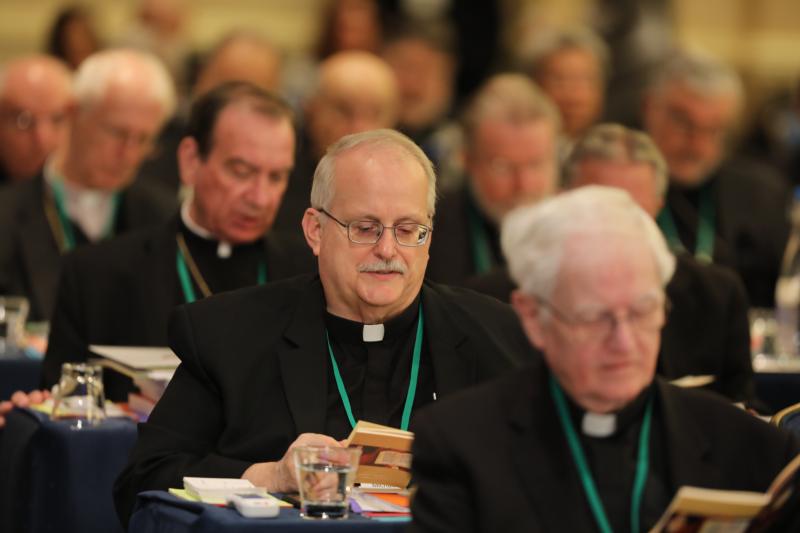 UPDATED – BALTIMORE (CNS) — Current issues of the day and references to the teachings of Pope Francis can be found throughout the materials approved by the U.S. bishops to supplement their existing document on Catholic participation in public life.

The materials — an introductory letter and four videos — address concerns such as the common good, immigration, abortion, poverty, care for creation and the need for civil dialogue.

The bishops approved texts of the materials Nov. 12, the second day of their fall general assembly in Baltimore.

The letter was approved 207-24 with five abstentions; the vote on the video scripts was 227-5 in favor with four abstentions.

The materials supplement the U.S. Conference of Catholic Bishops’ existing document, “Forming Consciences for Faithful Citizenship,” which was developed as a guide help Catholics form their consciences in voting and other areas of public life.

The new materials have been under development since March. Archbishop Jose H. Gomez of Los Angeles, incoming USCCB president, chaired a working group that consisted of 13 chairmen of USCCB committees who drafted the materials.

They are meant to be used by individuals and parish study groups in the run-up to the 2020 elections.

During a discussion about the letter, Cardinal Blase J. Cupich of Chicago proposed an amendment to include an entire paragraph from Pope Francis’ apostolic exhortation “Gaudete et Exultate” (“Rejoice and Be Glad”) be included.

He said the paragraph — number 101 — encompasses the broad teaching of the pope’s pontificate including justice for a wide segment of marginalized people.

In the paragraph Cardinal Cupich cited, the pope acknowledges the church’s concern for the unborn, but also describes as “equally sacred” the lives of the poor and elderly people, human trafficking victims and others who are struggling to survive. The pope also addresses the need not to ignore injustice and points to widespread consumerism as a threat to those who live in “abject poverty.”

A brief debate followed as Bishop Robert W. McElroy of San Diego said, in supporting Cardinal Cupich, that he was concerned the supplementary letter stating that abortion is the preeminent teaching of the church would open the door for people to ignore the pope’s call to consider other concerns as equally important.

Archbishop Gomez also responded, explaining that the paragraph from the pope’s exhortation was not included in full, but only in part, because of the directives of the full USCCB assembly in 2018 to keep the letter short. However, he added, the specific passage was being footnoted in the letter.

In a separate vote, the bishops did not approve Cardinal Cupich’s amendment to include the full paragraph but instead accepted a revised text developed by the working group overnight. The vote was 143 to 69.

The letter, encompassing three pages, reminds Catholics that “we bring the richness of our faith to the public square” and that “faith and reason inform our efforts to affirm both the dignity of the human person and the common good of all.”

It introduces the teaching of Pope Francis early on, saying that he calls people to “holiness” by requiring defense of the unborn and upholding the human dignity of poor people, the elderly facing “covert” euthanasia, human trafficking victims, and other people exposed to other harms. It also specifically mentions the pope’s teaching on migration, xenophobia and racism, abortion, global conflict and care for creation.

“In the United States and around the world, many challenges demand our attention,” the letter said.

The letter also urges Catholics, including those who seek public office, that participation in political parties should be influenced by their faith and not have their faith influences by political stances.

One long paragraph is devoted to concerns for immigrants, including young people who remain in the United States under the Deferred Action for Childhood Arrivals and the Temporary Protects Status programs and mixed-status families that face possible separation because of the threat of deportation.

A second long paragraph follows. It tackles racism; religious freedom concerns domestically and internationally; marriage as the union between one man and one woman; and the need to protect the environment.

The bishops write of their concern for polarization by saying that Catholics are challenged to “serve as models of civil dialogue” in all aspects of public life.

The letter concludes with a prayer that calls for Catholics to “respond to the call to faithful citizenship, during election season and beyond.”

The four videos take on various themes and they were expected to be less than two minutes in length. They also will be combined into one overall six-minute video.

The first introduces Catholic participation in public life while the others look at human life and dignity, the common good and “Catholic love their neighbors.”

Each video includes images of people serving others as well as the pope with voice overs that alternate between young people and a narrator, which the scripts describe as a bishop. The narratives focus on how Catholics can engage in various issues with Catholic social teaching as their foundation.

Each segment also closes with a prayer followed by a scene that refers viewers to the Faithful Citizenship website at FaithfulCitizenship.org.

The bishops authorized the development of the materials in June 2018 after a long discussion on how the main document could be improved and used more widely in parishes.

“Forming Consciences for Faithful Citizenship” was last updated in 2015. The bishops agreed not to change the document this time around, but to supplement it with the new materials that would reflect current concerns and the teachings of the pope.