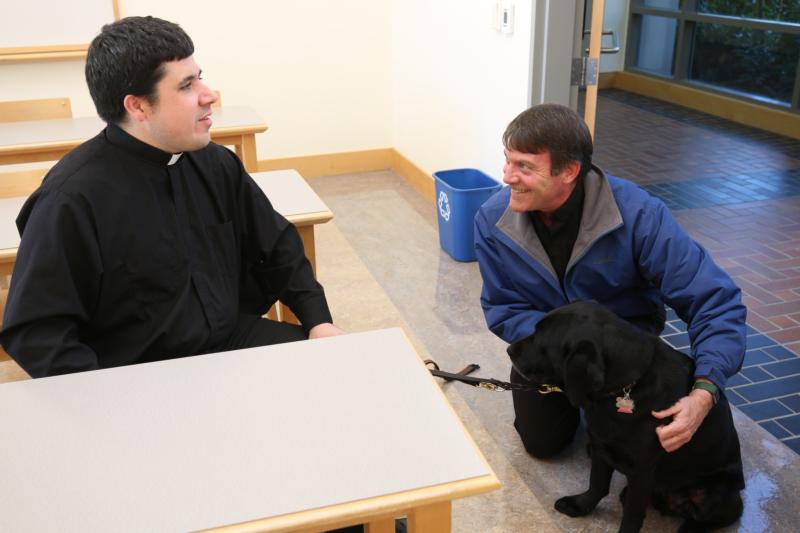 Father Steve Clovis, vice president of administration and director of human formation at Mount Angel Seminary in St. Benedict, Ore., stops by to scratch Dagwood, who was off duty Oct. 1, 2019. Tony Del Castillo, a second-year theology student for the Diocese of Orange, Calif., and his guide dog “inspire us and humble us,” said Father Clovis. (CNS photo/Katie Scott, Catholic Sentinel)

ST. BENEDICT, Ore. (CNS) — Although Tony Del Castillo cannot see, a friend’s question years ago helped him perceive people with clarity and to look beyond an individual’s quirks, foibles and facades.

“God used her to open up my eyes in a sense,” said Del Castillo, the first blind seminarian at Mount Angel Seminary, a Benedictine seminary in Oregon, in its 130-year history.

The 40-year-old sat in a classroom in October recalling the early impetus for his vocation journey. His guide dog, a black Labrador named Dagwood, rested at his feet.

The seminarian, a second-year theology student for the Diocese of Orange, California, was born with Leber congenital amaurosis, an eye disorder that affects the retina. His brother has the same condition.

The boys’ parents advocated for their sons and others with disabilities, fighting at the state and national levels to pass the Americans With Disabilities Act of 1990.

“They helped me learn to speak up for myself and to be an advocate,” the seminarian told the Catholic Sentinel, newspaper of the Archdiocese of Portland.

Del Castillo is a skilled pianist and drummer. After high school, he studied jazz at the University of Southern California.

He said a turning point for him came when his friend Lisa asked how she could love him better.

“The way she said it, I knew she wanted to know how she should treat me as a blind person,” recalled Del Castillo. He said he told her to treat him like she would anyone else.

But because she said the word love, he felt that she was really asking: “‘What’s the best way to get beyond the surface? Because you are someone that I like as a friend but can love as a brother.’ That was one of those points that inspired me to grow in my faith,” Del Castillo said. “It started to change my whole outlook on life and how I look at other people. God’s sight tells us that we have to look past what’s superficial.”

This insight prompted his involvement with the music ministry at the university’s Catholic center and since there weren’t any Braille hymnals, he listened to the music to memorize it by ear.

“The music was a good teacher,” he said. “I learned more about things we believe as Catholics because music can convey teachings about social justice, the Eucharist, God’s love.”

Del Castillo started considering the priesthood in 2003, but music remained his passion. He earned a master’s degree in popular music and taught blind youths’ percussion.

When students said they couldn’t do something, he assured them they could, but they needed to be advocates for themselves.

The seminarian said his blindness has helped him identify with a range of people “who are thought of as ‘the other,'” and he hopes through his vocation to lift up those who’ve been dismissed — “be they homeless, immigrants, or dealing with racism or sexism.”

In 2014, Del Castillo began seriously to explore the priesthood and went through a discernment process. He applied to a seminary and received unanimous recommendations as a good candidate.

“Unfortunately, the rector of that seminary basically told my vocations director: ‘Tell him that he shouldn’t even apply.’ They didn’t know how they were going deal with me.”

Del Castillo sent a letter to the rector saying he understood the concerns but that he’d like to discuss ways it might work out. It was fruitless.

“That was tough,” said Del Castillo. “But it was a good lesson in patience and perseverance.”

Eventually he applied to Mount Angel, which was open to the possibility of a blind seminarian, and he began studies last year.

“I was amazed by how peaceful it is here, and the people are awesome,” said Del Castillo, who holds no animosity toward the first seminary. “It wasn’t right how they handled it, but in the long run this is better how it worked out.”

At Mount Angel, he is often able to get course material in Braille or audio or scan a book and convert it into audio. He regularly uses a touch-screen tablet that includes Braille.

As self-sufficient as he is, Del Castillo reaches out for assistance when needed to navigate the campus.

“And Dagwood here, he helps me be more independent,” he said, adding with a grin that “the guys think of him as the seminary mascot, and he’s also a holy dog.”

He once took Dagwood outside for a bathroom break and encountered a group of seminarians about to start walking and praying the rosary. They invited Del Castillo to join, but he had lots of homework to finish and kept trying to tug the dog back inside.

Dagwood had his own ideas. “And, well, guess who ended up praying the rosary that day?” Del Castillo said, laughing.