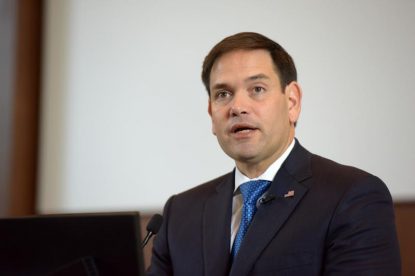 Sen. Marco Rubio, R-Fla., delivers a speech on “Human Dignity and the Purpose of Capitalism” Nov. 5, 2019, at The Catholic University of America in Washington. He called for a “common-good capitalism” to restore a balance between the extremes of corporatism and socialism that he sees as dividing the United States. (CNS photo/Patrick G. Ryan, The Catholic University of America)

WASHINGTON (CNS) — Sen. Marco Rubio, R-Florida, called for a “common-good capitalism” to restore a balance between the extremes of corporatism and socialism that he sees as dividing the United States.

Businesses, Rubio said during a Nov. 5 speech at The Catholic University of America in Washington, have the right to make profits, but their quest for profit goes too far when they desert the workers and communities that made them profitable in the first place simply to make goods more cheaply in other countries.

The pursuit of profit, he added, has led to a reordering of the economy. The amount of profits returned to investors has soared by 300%, Rubio said, and stock buybacks, while favored in federal law, “do nothing” to help the economy and should be taxed.

Rubio quoted from Pope Leo XIII’s 1891 encyclical “Rerum Novarum,” which ushered in the age of Catholic social teaching, saying the distress and discontent felt by workers and populations in upheaval because of the Industrial Revolution mirrors the unease felt by many today.

In an auditorium filled mostly with students, Rubio told them they would be the first generation of Americans “worse off” than their parents: burdened with student debt, facing uncertain jobs and career prospects despite a college degree, with home ownership beyond their reach, and starting later than ever to marry and start a family.

But Rubio derided socialism as the solution to these ills. “Some politicians today entice us to embrace socialism, with the promise that only the government can provide us these things, but in practice that’s never how it works,” he said.

If the nation fails at restoring this balance, “China is undertaking a patient, well-designed effort to reorient the global order to their advantage,” he said. “But how can we possibly take on this challenge … if we do not first confront our crises at home? Because we are in a competition with a near-peer adversary with three times our population, we can’t afford to leave anyone behind.”

Rubio said in a question-and-answer period following his remarks that the United States need to rebuild its manufacturing capacity. Having seen the aerospace industry in Florida, he added, manufacturing brings the kind of jobs “you can build communities around.”

If manufacturing capacity is lost, Rubio said the country would be at the mercy of other nations — mentioning China specifically. He added he has introduced a bill that would create “national cooperatives” for vital manufacturing needs, citing the mining of rare-earth metals used in communications technology. Rubio noted that U.S. pharmaceutical manufacturing has already sent most of its capacity overseas.

The next step, he said, is to find cost-effective replacements for Chinese technology. He theorized that the United States could tell a rural cooperative to not use Huawei technology since it may have the capability to spy on Americans, but the coop could well retort there is no other maker of technology as sophisticated for an affordable price.

In preparing for his speech, Rubio said, he was asked what goal his speech would have, with some speculating he would offer a post-Trump economic alternative. His reply was that his remarks are consistent with what he has done since joining the Senate in 2011: “to do whatever it takes to keep this country from falling apart.”

NEXT: Blind seminarian in Oregon ‘sees’ beyond external trappings