Catholic faith means ‘everything’ to vet who survived Battle of Midway 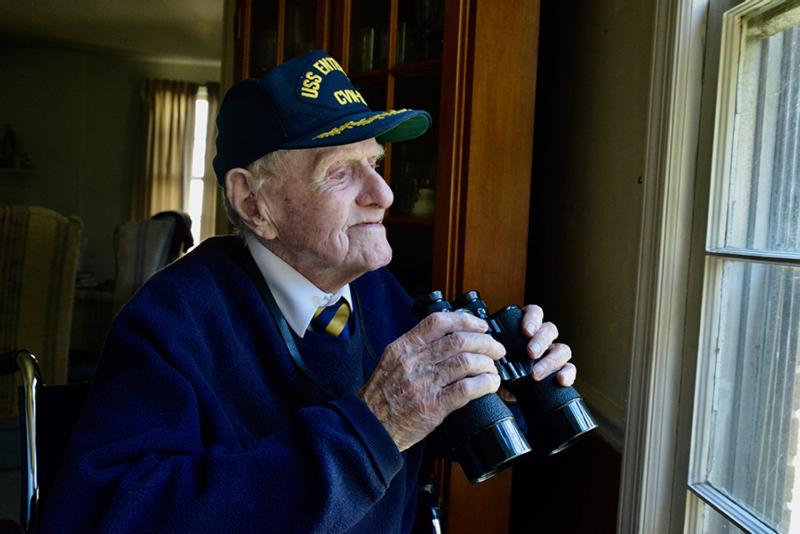 Retired U.S. Navy Capt. John W. “Jack” Crawford Jr., of Rockville, Md., is seen in this undated photo. In this photo he’s holding the binoculars that he used during the Battle of Midway in 1942. (CNS photo/Michael Hoyt,Catholic Standard)

More than 77 years earlier, June 4, 1942, Crawford, then a Navy ensign, held those same binoculars while on watch as a junior officer on the deck of the USS Yorktown, scanning the horizon as the pivotal World War II Battle of Midway began, Crawford told the Catholic Standard, newspaper of the Archdiocese of Washington.

During the battle he and the other crew members had to abandon the crippled aircraft carrier before it eventually was sunk by a Japanese submarine.

Just as Crawford was a survivor, so too were his binoculars, retrieved from his room by another Navy seaman before the Yorktown went under. Inscribed with his name, the binoculars were a prize from the American Legion at the Naval Academy. The classmate who grabbed them felt honor bound to return them to Crawford.

On Sept. 1 Crawford marked his 100th birthday with a special blessing at St. Elizabeth Parish in Rockville, Maryland, where he and his late wife, Betty, were among the founding parishioners in the mid-1960s and the church where he continues to attend Sunday Mass.

Crawford, a native of Andover, Massachusetts, grew up in a large, devout Catholic family in Tilton, New Hampshire. In 1938, he entered the U.S. Naval Academy.

“I was in the class of 1942,” Crawford told the Catholic Standard, newspaper of the Archdiocese of Washington. “The Navy already knew there was war in the offing. … So they got it (class work) down to three and one-half years. We graduated Dec. 19, 1941, just after the Japanese attack on Pearl Harbor.”

Recalling his experiences at the academy after the Dec. 7, 1941, ambush, Crawford said he was in studying in his dorm room that afternoon.

“I didn’t know about Pearl Harbor until the evening, but there was an unlikely, eerie quiet all that afternoon. … It was a somber evening, no discussion because nobody knew anything beyond the fact that we had been attacked. We had no idea of the extent,” he said.

Weeks earlier, in October, the midshipmen received their ship assignments for after graduation.

“I’ve got the order still, to the USS Oklahoma,” Crawford said. “Well, she was sunk at Pearl Harbor and so I was fortunate in not getting there. Apparently they didn’t want to announce the ship was sunk, so they sent those of us who were going there … to MIT (Massachusetts Institute of Technology) for a course in radar, which was secret at the time.”

By May 1942 the young ensign was on his way to Pearl Harbor with orders to serve on the Yorktown, which was undergoing quick repairs there after being damaged in the Battle of the Coral Sea.

With Crawford on board, the Yorktown left dry dock on Memorial Day for what became Midway.

Before long the crew got word of the impending battle.

“They got us in the wardroom and said the whole combined Japanese fleet was heading for Midway and we were going out to meet them,” he said.

During his watch word came through that the Japanese forces were approaching: U.S. military intelligence had broken the Japanese code and knew the time and location of the planned assault.

The Yorktown was hit by three bombs, sustaining heavy damage.

“After the first attack was over, we repaired the damage, took care of the dead and then we restored speed to the point we were back up to launch speed about the time that a flight of Japanese torpedo bombers came in on the port side,” he said, “I saw a flight of three coming toward our stern. They launched some torpedoes. They went off with a cloud of brown smoke.

“The ship began to take a list to port. I knew when the deck edge began to go under, she was going to capsize. About that time the captain sent out the message, ‘Abandon ship.’ I climbed up to the starboard side and went over the side and down a line into the water.”

Crawford remembered how the water’s surface was covered with fuel oil. Within an hour he was pulled aboard the USS Russell.

Historians regard the four-day Battle of Midway as a turning point in the Pacific theater and as perhaps the most decisive victory in U.S. naval history. The Japanese fleet was crippled, losing four aircraft carriers, many of its best pilots and aircraft.

The new movie “Midway” was released Nov. 8. Crawford was among those attending a special premiere of the film for Navy personnel. “Its principal value in my view,” he said, “it needs to wake up the American people to the significance of Midway. … The Washington Post and every other paper I know of, celebrates as they should, the landings at Normandy. Not a peep about Midway.”

“I want people to know three things (about Midway): the bravery of the men in battle, particularly the aviators, most of whom got shot down … and the tactical brilliance and strategy … and of course, the intelligence,” Crawford said. “Without that, we would have been dead pigeons … (they were) able to predict the precise place, the precise time and the precise distance (of the attack) … right on the button.”

After surviving the Yorktown’s sinking Crawford served on the escort carrier USS Santee, which was involved in the invasion of North Africa and also successfully hunted German submarines in the mid-Atlantic.

After the war he continued serving in the Navy and earned two master’s degrees from MIT, in naval construction and engineering and in nuclear physics.

Crawford married Elizabeth Edwards in 1953 at the Cathedral of St. Patrick in Norwich, Connecticut. They had four children and sent them to Catholic schools when the family moved to Maryland.

Betty Crawford died in 2014. They had been married 61 years.

To this day, Crawford’s Catholic faith means “everything” to him.

Before retiring from the Navy as a captain in 1963, Crawford served in the naval nuclear propulsion program and worked for the Atomic Energy Commission.

He also served as a representative of Adm. Hyman G. Rickover, who is known as the “father of the nuclear Navy.” Crawford was sent to Newport News, Virginia, to help oversee the construction of the first nuclear powered aircraft carrier, the USS Enterprise.

Crawford retired from the Department of Energy in 1981.

He continues to enjoy reading books about history. He is writing his personal account of the building of the Enterprise.

When asked about the secret to his longevity, Crawford credited “the religious training I had.”

“You were expected not to do anything in excess. To work hard, pray to the Lord, and mind your own business,” he said, laughing.